To the East with Disney

Despite sporting a dozen directors, co-directors, and writers, Raya and the Last Dragon is an enjoyable animated adventure. B+ 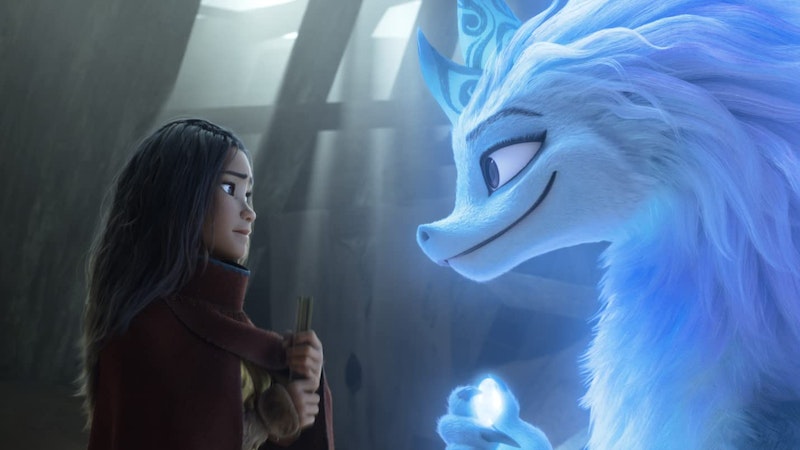 The latest Disney animated feature, Raya and the Last Dragon, is familiar Disney fare for 2021: adventure-based, female-focused, and set in a non-Western culture. The film, which opens Friday in theaters and also as a $30 "Disney+ premiere access" release, is mostly successful, with standout animation, outstanding world building, and engaging characters. It's not a Disney classic by any means, but it works.

Raya and the Last Dragon is set in a fictional land called  Kumandra, which resembles Westeros from Game of Thrones, except that it's inspired by various cultures of Southeast Asia. Much in the way that almost everyone on Game of Thrones was British, even though it was a fictional land, Kumandra is meant to look like Thailand, Vietnam, and other Asian countries. There are different sub-kingdoms with distinct cultures that are constantly at war with one another.

In a long preamble that's confusing at first, we learn that humans and dragons used to live together in harmony, but the last of the dragons sacrificed herself to save the people. As time went on, the humans split into different kingdoms, all named for dragon body parts (Heart, Fang, Spine, etc.), and began fighting with one another. But when monsters called the Druun—who have the power to turn people to stone—resurface, protagonist Raya (Kelly Marie Tran, from The Last Jedi) hopes to bring about peace, and unfreeze his father, in part by awakening the titular last dragon (voiced by Awkwafina.)

Once the lengthy exposition is out of the way, Raya and the Last Dragon settles into an enjoyable adventure, one featuring a group of unique, humorous characters teaming up together, as well as first-rate animation that gives distinct looks to the different kingdoms.

Character highlights include an ass-kicking baby, a funny pill bug (voiced by Alan Tudyk), and a gentle giant (Benedict Wong.) Meanwhile, Awkwafina voices Sisu, the dragon, as more of a comic relief figure than the sort of fearsome creatures who burned cities to the ground on Game of Thrones. Meanwhile, the relationship between Raya and warrior princess antagonist Namaari (Gemma Chan) has enough subtext that I'm expecting full-length fan fiction to be written by the end of the opening weekend.

The credits of Raya and the Last Dragon are a sign that tumultuous things went on during the production. Two people (Don Hall and Carlos López Estrada) are credited as "director,” and two others as "co-director" ( Paul Briggs and John Ripa.) Eight different people get a "story by" credit, including the two writers, Qui Nguyen and Adele Lim, who are credited with the screenplay. But chaos has a history of leading to good outcomes, especially for Disney, and that seems to be what happened here.

Finally, if you see it in the theater, don’t show up late, because Raya and the Last Dragon is also preceded by a wonderful short called Us Again, which recalls Pixar's great Up, and not only because it's about an older couple and is told completely wordlessly.