A New York Times piece treats the Amazon Prime Mount Everest series and its subjects with little understanding or respect. 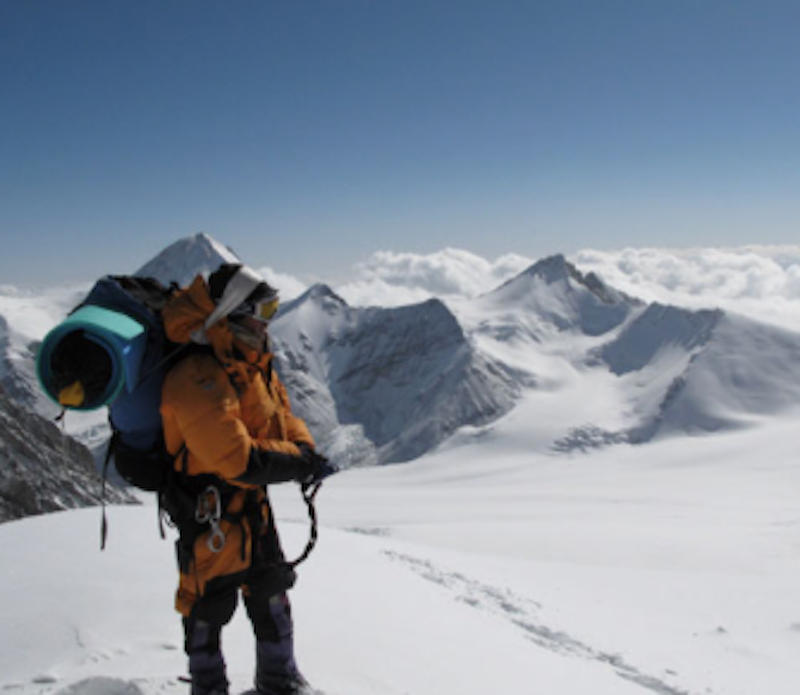 As I neared the end of the first season of the mountaineering reality show, Everest: Beyond the Limit (Amazon Prime), I took a look at the New York Times review just out of curiosity. What I'd seen was a bunch of tough and determined guys, several of whom had serious physical challenges, putting their lives on the line and enduring, for days on end, incredible hardship to make their life's dream come true. What Times writer Susan Stewart saw, however, was men with "peeling noses; scabrous, wind-reddened flesh; and purple, gangrenous toes," which she implied HD TV made extra gruesome for her delicate eyes. Later on, Stewart mentions chapped lips, and how they partly diminish the rugged good looks of the expedition's leader, New Zealander Russell Brice. Stewart fixates on the visible physical effects of mountaineering, which is like being preoccupied with the wet hair of the competitors in a surfing competition.

One of the climbers, Mark Inglis, is a double amputee who lost both of his legs, just below the knee, on a previous climb. He's attempting, using artificial limbs, to become the first person to summit Everest with such a handicap. Stewart devotes two sentences to this remarkable individual, neither of which commends his bravery or tenacity. But at least she didn't talk about his chapped lips. And then there's the Danish man who suffers from asthma, but is still attempting to make the summit without using bottled oxygen, and Tim, who's 6'5" tall and has a bunch of screws in his back from a motorcycle accident. Stewart gives them each half of the same sentence, and no more.

Tim's the most compelling personality in a show that does a good job of character development. He's a charismatic former Hell's Angel who won't give up, much to Russell Brice's consternation at times. You think he's down and out when he's feeling bad has to leave the group and go down the mountain for several days to recuperate, but he fights his way back up the mountain and is back in the game. But Tim's spirit, despite direct orders from Russell Brice to come down the mountain, is the kind of attitude that could get a Sherpa killed. Sherpas are the Himalayan natives who act as guides and pack horses for the climbers.

Each climber on Everest: Beyond the Limit pays $40,000 to join the expedition, which isn't a great deal, considering that they're the stars of a reality TV show. The climbing sequences are filmed with the Sherpas' helmet-mounted cameras, providing an impressive level of video documentation. In one arresting moment, a frustrated Sherpa says, "Tim, you're so lazy." Tim isn’t lazy, but he's struggling near the summit and the guide fears for both of their lives. One thing I'd like to know is if Discovery Channel paid the Sherpas a bonus, beyond their standard fee as guides and packhorses, for doing their camera work for them. If not, this is a serious exploitation of hard-working, brave men.

This show highlights that inexperienced climbers, with the help of an expert like Brice (he's able to radio them and tell them how many more minutes of oxygen they have left) and all kinds of ladders the Sherpas mount can make it to the top of Everest. If your body acclimatizes to the altitude and you have some luck with the weather, you have a decent chance of success. Still, it can be over instantaneously, as happened with the Dane when his altitude sickness kicked in. But in preparation for the most arduous physical test of their lifetimes, the show's climbers had to adopt brutal training regimens.

Susan Stewart, who disdains high-altitude mountaineering, doesn't touch on how the climbers attained the necessary fitness levels—it doesn't interest her. Instead, she zeroes in on the fact that a member of another team was in the process of dying near the summit, and members of Brice's team passed him by on their descent. The writer claims that exploring that death "would not be in keeping with the documentary’s semiworshipful attitude toward its stoic subjects." She perceives this attitude because she has so little regard for the climbers. To the rest of us, the filmmaker's just portraying what he sees, which is people going way beyond what we'd be willing to endure or risk.

Stewart's shoddy Times review is a prime example of the distasteful journalism produced when an editor gives a story to someone who looks down on, and has little understanding of, the subject matter. The ethical issues surrounding the death of that climber are complex, yet Stewart wants to make it simple—the network shies away from the topic because it interferes with its pumped-up narrative. But the dead man's own mother said it was the other climbers' responsibility to save their own lives, not her son's.

Coming to the aid of a climber in what's known as the "death zone"—above 26,247 feet—can easily lead to your own death, as it takes an extraordinary effort to save a debilitated climber's life that high up on the mountain when you're already nearly incapacitated yourself. Twenty Sherpas could carry him down to safety, but they're not available at the snap of your fingers. You can't get a helicopter up to that altitude because the air's too thin. Once you've made the decision to go into the death zone, you're on your own. There are about 200 frozen bodies visible to all Everest climbers if they need any reminders.

If the Times writer wanted to explore the most serious underlying issue this show showcases, she'd have written about how, at the top of Everest, there are too many climbers, meaning they're forced to wait in the death zone for too long before making their ascent. Writers sit in their offices all day and type. On the other hand, Mark Inglis lost an inch from each of his stumps and the tips of several fingers to frostbite while freezing on a mountaintop.

Susan Stewart wrote that the program induced the kind of misery you'd get from putting a plastic bag over your head and running up the stairs. The one I watched, however, reminded me of this William Blake quote: "The road of excess leads to the palace of wisdom... You never know what is enough until you know what is more than enough.” Any climber who gets near the summit of Mt. Everest will know things that a smug New York Times writer will never come close to learning.