On The Blue Angel (1930), the first of seven legendary collaborations between Josef von Sternberg and Marlene Dietrich. 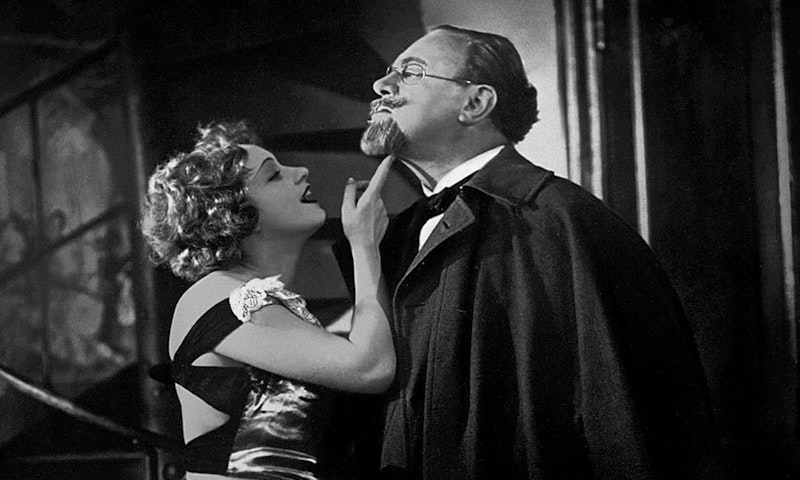 The collaboration between Marlene Dietrich and Josef von Sternberg began with the filming of The Blue Angel (1930), a tragic story of a German Gymnasium professor. They would make six more films together (all currently streaming on the Criterion Channel), and in each exploration of complex human passions, traces of Dietrich’s and von Sternberg’s equally complex relationship somehow found its way onto the silver screen.

The Blue Angel catapulted Dietrich into Hollywood stardom, and in many ways, von Sternberg’s artistic direction encouraged the creation of Dietrich’s persona. The film is based on Heinrich Mann’s novel, Professor Unrat (1905), which is a critique of upper-class German society, and what Mann saw as an embodiment of moralistic hypocrisy. Von Sternberg moves away from the social issues of that time and instead crafts a different focus—a relationship between professor Immanuel Rath (played by Emil Jannings) and a cabaret performer, Lola Lola (played by Dietrich).

Rath is a portly fellow, who’s somewhat fastidious and precise in everything he does. He’s a bachelor, who presumably chose celibacy on the grounds of his intellectual and educational work. He’s rational and strict but it would appear that this moral discipline doesn’t come from an authentically existential place. Rather, it’s used as a means for him to show moral superiority to others, especially his students.

The students at the Gymnasium don’t respect him. They draw silly caricatures of him and call him “professor Unrat,” meaning garbage or filth. This is already an indication of a much larger interior problem for Immanuel Rath, that in some way he lacks self-respect. The pinnacle of his classroom moralism comes when he discovers the boys’ obsession with the cabaret dancer, Lola Lola, who’s performing at a local club, The Blue Angel. The boys have a photograph of Lola Lola, which Rath confiscates but doesn’t destroy. Instead, he’s taken by the image of the erotic Lola Lola, despite the fact that he seems to be resisting it.

Von Sternberg’s direction moves the images not only chronologically so that we have a feel of passage of time, but also existentially. Both Rath’s and Lola’s psychology is changed at the end of the film. At first, Rath wants to do an honorable thing and marry Lola, and take her away from the dark underworld of low-class cabaret filth. Jannings’ performance when he proposes marriage perfectly captures the ontological contradiction of this strange developing relationship—he’s serious and sweet, but these qualities carry no particularly important value for Lola. In fact, she laughs raucously at the suggestion. Dietrich’s masculine swagger of indifference is in full force here, as she sways her body in paroxysms of laughter at the mere suggestion that she, a cabaret chanteuse, should marry Rath, a professor of serious moral standing.

Whether from pity, curiosity, or practical reason, Lola marries Rath. At this point, Rath has lost his job because of this bizarre marriage, and he’s drowned and subsumed by the vulgarity of the cabaret troupe. At the wedding, the director of the troupe welcomes Rath into their “family,” but it’s clear that there will be a price to pay, and not necessarily in any pre-meditated way. Rather, there’s a sense in which Rath can only exist if he ontologically changes himself to become one of “them.” Lola begins to cluck like a hen, to which Rath (at first reluctantly) responds with crowing like a rooster, a bizarre sound that gets louder along with the accepting laughter of the entire wedding party. The two spheres of life—sacred and profane—that are supposedly embodied by Rath and Lola respectively are incompatible. The more Rath tries to change Lola into a respectable woman, the more his own dignity and respectability are lost.

The metaphorical clothing of Lola that Rath continuously attempts to do is slipping through his fingers, and one wonders whether he had any power at all. He sells postcards of half-nude Lola to the patrons at the club, like a fool that he is. The descent reaches another point: a quick scene change that indicates a passage of years, we witness Rath in front of the mirror, putting on make-up, and transforming himself into a clown. He’s now part of the troupe. It’s difficult to have any pity for Rath. After all, didn’t he bring this on himself? Wasn’t he a fool, a clown already, even before he gave away his will to Lola?

As Rath’s supposed masculinity withers away, Lola’s aggressiveness gains traction. She becomes dismissive of him, and treats him like garbage. Aesthetically, we see this in Dietrich’s onstage performance as she straddles a chair and sings in a way that exemplifies the fight between masculinity and femininity. Yet, this aggressiveness has nothing to do with an inbuilt male need to protect (which, one could say, is what drove Rath to protect her from the vulgar assault of immoral world she inhabits). Rather, Dietrich’s Lola is cruel and laughs at moral and social norms. The only thing that matters is herself.

One of the themes in the film, which von Sternberg brilliantly depicts, is dehumanization. The pinnacle of Rath’s dehumanization is when he performs on stage, in the same town he worked as a professor, in the same club he first met Lola, as a clown capable only of crowing like a rooster. He has been cuckolded by Lola, and in this scene, he doesn’t resemble a human being anymore. He’s objectified to such an extent that, for the audience, the task of seeing a shred of human dignity becomes next to impossible.

And yet, this film is not just about Rath’s loss of dignity but also ours. Do we lose our dignity if we laugh at this man? Certainly, he isn’t even pitiable, but are we losing something of our own selves if we don’t see the turn of these events as troubling? We must ask what part of ourselves are we losing if we become detached from seeing the loss of dignity to begin with? Immanuel Rath has accepted his life by choosing not to choose. Lola has accepted her life by choosing cruelty over kindness. The question is what are we, von Sternberg’s audience, choosing in theses cinematic moments of false desire, imposed cruelty, and annihilation of the good?