Da 5 Bloods is baggy but ambitious, messy but unifying. 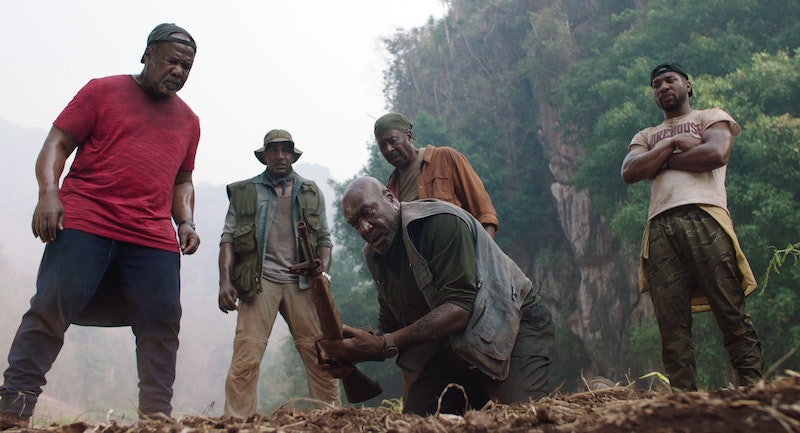 You’d think it’d be Spike Lee’s good fortune that his recent joint Da 5 Bloods came out just as protests against racism and police brutality swept North America. He’s a political filmmaker, and Bloods speaks to some of the issues driving the zeitgeist. Certainly the movie drew attention at the time of its release. Has it affected the popular discourse, though? A quick Google search turns up only 33 million hits for “Da 5 Bloods,” compared to 35 million for “Snowpiercer,” 84 million for “Warrior Nun” (both now Netflix TV series), and over 1.2 billion hits for “The Old Guard” (a big-budget Netflix original movie).

Then again, on July 13 a poll of 100 movie critics was released that narrowly voted Bloods as the best picture released so far this year. It looks, then, like a major release celebrated by critics, but with minimal influence on a general discourse that the movie’s ostensibly deeply engaged with. Why one and not the other?

Da 5 Bloods follows four African-American Vietnam veterans whose squad, known as the five bloods, was given the mission in the early-1970s of retrieving a package of CIA gold from a plane crash in the jungle. Led by the now-dead Norman Holloway (Chadwick Boseman), the bloods decided to take the gold for themselves and buried it, but napalm attacks erased landmarks and the bloods never recovered the treasure. In the present day, though, a mudslide recently exposed the plane that had carried the gold, and the four surviving bloods have returned to Vietnam.

What unfolds is an erratic but powerful story with a multiplicity of threads. Of the four bloods, only Isiah Whitlock Jr.’s Melvin lacks a major subplot—although he does get the most directly obvious character growth. Eddie, played by Norm Lewis, is a rich man who may be hiding a secret. Otis (Clarke Peters) finds out he has a daughter in Vietnam he never knew about, and when his old flame Tiên (Lê Y Lan) sets up a deal to sell the gold through shady Frenchman Desroche (Jean Reno) he has to worry about how much he can trust her.

And then there’s Paul (Delroy Lindo), who wears a MAGA hat and suffers from PTSD and more than any of the others idolizes the memory of Norman. He has a son, David (Jonathan Majors), who turns up unasked and joins the expedition to watch out for his father. Other major characters include Vinh (Johnny Trí Nguyen), the Bloods’ guide, and a trio of idealistic young people who’ve founded a non-profit dedicated to clearing landmines.

That’s a lot of material, even for a movie that runs more than two and a half hours. It’s held together by a straightforward adventure plot, as the Bloods travel into the wilderness to recover the treasure and deal with internal conflict, external betrayal, and fraying sanity. Flashbacks deepen the picture, expanding character without leading to anything too surprising.

Thematically, there’s a lot at work. Race and imperialism, to start with; Lee gets a lot of mileage setting the experience of black men in Vietnam against the racial politics and revolutions of the late-1960s and early-70s. He also gets a lot out of overlapping systems of oppression: marginalized in their own society, the bloods are in the service of a colonial war machine intervening in a foreign country. They want to recover the gold as a kind of reparations for their people, but there’s an irony in that it had been intended as payment for (American-supporting) Vietnamese. Nor does Lee ignore the deeper history of imperialism in Vietnam; it’s no accident that both Desroche and the leader of the anti-landmine group are French.

But the bloods find Vietnam a different country from what they knew, if one still shaped by the experience of “the American War.” Lee’s general point is that history’s a given, but whether you let it trap you into a spiral of degeneration or struggle to overcome it and build a fairer world is up to you. Yet this only scratches the surface of the film.

There’s a sense in which the movie’s also a meditation on redemption for violence, and a search for love and god; there’s a nice irony that the last violent shoot-out of the film takes place in an old temple. Paul in particular struggles with the memory of his wife, the reality of his son, and the trauma of his past. You can see why he’s turned to Trump, as a kind of substitute for the faith many of the others have. If love and god are the same, Paul can’t see it or feel it.

Lee’s cleverness extends to the film’s formal devices. The aspect ratio changes to show us what time period we’re in and what part of the film. Film stock changes to immerse us in a specific era. Old news footage is unexpectedly inserted into the story. And Lee pays homage to Apocalypse Now with an image and a music choice, encouraging meditation on how his movie contrasts with that one.

Most of this works to get across a sense of character. Some of Lee’s choices don’t pay off, though, and in particular I found that with the exception of the film’s climax the action scenes were unconvincing. One death-by-mine sequence is unfortunately Pythonesque. The pacing’s odd, building slowly, and deliberately refusing to focus on the nominal quest story in favor of exploring subplots.

Worse, dialogue is bluntly on the nose. That’s most notable when Lee unsubtly drags in a political or cultural reference. But there’s also sometimes a lack of originality in character-based moments. “You’ve hardly changed,” Otis tells his former lover, and inevitably she answers “We both know that’s not true.”

Still, the character work that holds the film together. The acting’s uniformly excellent, with Lindo’s tormented Paul a standout. The camerawork gives us any number of striking landscapes, but the actors remain the visual heart of the film, sometimes speaking directly to camera.

Da 5 Bloods is a baggy, ambitious, messy movie that’s an overall satisfying experience because the characters unify a wealth of narrative matter. The meaning of “blood” is interrogated in a number of ways, so theme develops and pays off. The film may not have connected broadly with the current social moment, but it doesn’t fit neatly into the labels of American politics. The thing about great art is that you can’t easily stuff it into a box. Far from flawless, Da 5 Bloods might be complicated and raw enough to be great.