Kelly Reichardt makes her case with grace in First Cow. B+ 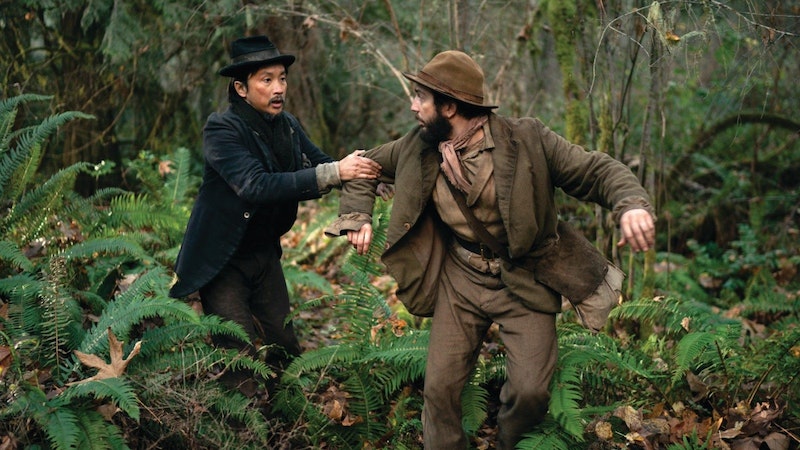 Kelly Reichardt’s 2016 film Certain Women felt like a career summation, a bigger scope for a director focused on big stories about “small” people, from the inept eco-anarchists of Night Moves, to the dead-end couple of River of Grass, to the feckless man-children of Old Joy, to the devastating and immense story of Wendy and Lucy. Drawing from three short stories by Maile Meloy to form a triptych that barely connects, Reichardt expanded her canvass without losing any of her intense solitude and longing. There are few scenes as enormous and completely restrained as the climax in the parking lot of Certain Women, where Lily Gladstone reveals the depth of her obsession and love for Kristen Stewart not in a speech but in her presence, her face. Every shot of Gladstone and Stewart in that movie is an incredible expression of love and ambivalence.

Reichardt returns belatedly with First Cow, cut from theaters the week it was set to open because of the pandemic, just like Eliza Hittman’s Never Rarely Sometimes Always (a great movie). They’re available to rent on too many streaming services, and none that share profits with local theaters where I saw trailers for both of these movies. In any case, I’m glad they’re out relatively soon. First Cow most superficially resembles Meek’s Cutoff, Reichardt’s 2010 Western also shot in 1:33 and set in 1800s frontier America. I didn’t like Meek’s Cutoff at the time and it didn’t do anything for me last year, but First Cow is not the most brittle of bare bones like Meek’s Cutoff, a movie so understated and simple as to be incomprehensible.

First Cow opens with an astonishing shot of a long red tanker ship moving left to right, presumably somewhere in the Pacific Northwest. As the tanker passes, it lets out a wild and dark drone, mechanical but still like a whale, an aberration. It’s massive, and we watch the whole thing pass. Alia Shawkat shows up for a cameo setup: her dog finds a skull buried in the woods. Nonplussed, they dig up the dirt and discover two skeletons lying side by side. We’re thrown into the middle-1800s on the Oregon trail. John Magaro plays Cookie Figowitz and Orion Lee plays King Lu, fur trappers doing their best to survive on the front. René Auberjonois appears as a villager in one of his final film roles, recalling not only McCabe & Mrs. Miller but also his more conspicuous part in Brewster McCloud, surrounded by birds and bird shit until he becomes a bird himself.

A raven perches on his shoulder in First Cow as he looks on with suspicion at King Lu, a Chinese man in hostile territory. Cookie and King become quick friends when they start milking a cow owned by the local petit bourgeois (Toby Jones) at night. This Jersey cow only lets her milk flow at night, and while the helpless balding landed gentry white man can’t extract a drop from his cow during the day, Cookie and King get buckets from her night. And the cakes this milk makes; everyone goes bananas. These cakes keep everyone coming back, no less suspicious of King Lu but hungry nonetheless. Cookie and King have to maneuver an awkward offer to have a meeting with Jones’ character, who asks them with great curiosity how they make their cakes. All they can do is shrug their shoulders and flop sweat.

Gladstone shows up for a few minutes as an Indigenous American translator. After assisting Jones in his meeting with a local native captain, Gladstone’s character sits with another indigenous woman who doesn’t speak English. They make laugh, smile, and make small talk in their language. Reichardt doesn’t subtitle this, or any of the non-English exchanges. She doesn’t need to. Everything she tried to show in Night Moves, the anger of ecologists at the behemoths of industry, is expressed in the opening shot of First Cow more clearly and powerfully than anything in her 2013 film. There’s no need for a title card when we move from the present day back to the Oregon trail, and when Cookie and King take a nap side by side at the very end while trying to escape local thieves after their cake money, Reichardt doesn’t need to show them being murdered in their sleep.

Cookie’s been wounded and he’s probably not going to make it to the boat, but King does not give up. He stops to rest with Cookie and they rest just before the mouth of the river ready to bring them to Canada. We see one last shot of a mountain boy with a rifle, waiting for the Chinaman and the Cheat to emerge from the woods with their bag of silver coins. And that’s it; that’s all we see of these bandits. We spend the last five minutes or so of the movie with Cookie and King, knowing they’ll die in this very spot, forgotten until the 21st century yet unknown forever. King lies down with Cookie, and they sleep, and Reichardt cuts to black, bringing the film back to its opening proverb by William Blake: “The bird has a nest, the spider a web, man friendship.”

Unlike Meek’s Cutoff, this movie is austere without being avant garde. The Brechtian silence of Meek’s Cutoff and the fecklessness of the white people flummoxed by a “savage Indian” falls flat next to this genuinely moving story of a white man and a Chinese man becoming friends, “stealing” milk at night from a special cow, and making delicious cakes and selling them to the locals. Criticism of capital and private property is embedded in the narrative, and the argument it makes—that anything special and meaningful is beyond money—sounds trite when spelled out, but illustrated as is, it’s a great film.