Palm Springs is one of the most exhilirating films of the year. A 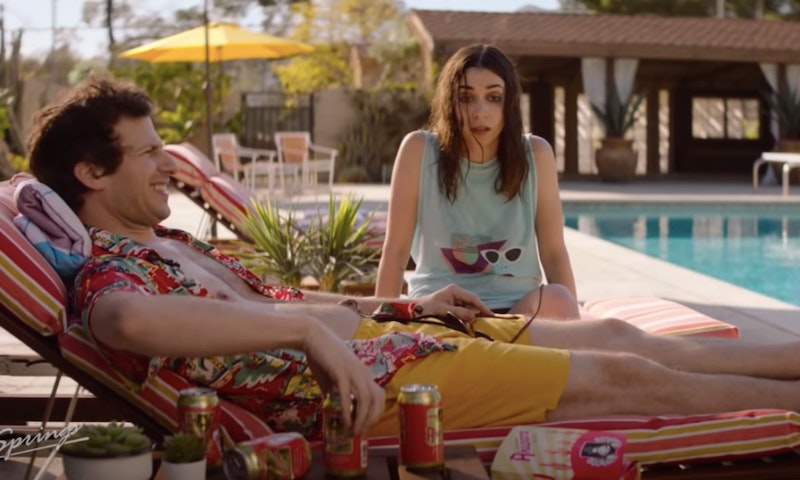 Palm Springs is one of the most exhilarating films of the year, the rare movie with massive buzz out of Sundance that lives up to the hype. The film, which debuted last Friday both on Hulu and at drive-in theaters around the country, clearly recalls the 1993 Bill Murray/Harold Ramis classic Groundhog Day. But it's no rip-off. Instead, it takes the premise in clever and creative directions.

Directed by first-time filmmaker Max Barbakow, Palm Springs was shot on location in the titular California town, and perfectly captures that place's uniquely weird energy. The screenwriter, Andy Siara, was also a writer on the late, great TV series Lodge 49, which was set in a similar model of specifically California weirdness. The film makes great, lived-in locations out of the wedding venue, a dive bar, and the desert highways in between.

Palm Springs is set at a wedding, at which Nyles (Andy Samberg) and Sarah (Cristin Milioti) are both guests. She's the sister of the bride, while he's a mysterious dude in a Hawaiian shirt who gives a bizarre toast. Soon we figure out that both characters, and at least one other, are stuck in a Groundhog Day-style time loop.

Perhaps the greatest strength of Palm Springs is the way it quickly establishes the rules for how this universe works, is creative with those roles, and slowly parcels out character revelations. It's one thing when a character mysteriously disappears, and the explanation for why she disappeared is even better. This is the type of film that's likely to bring lots of enjoyment on repeated viewings.

While I realize Popstar: Never Stop Never Stopping has its superfans, Palm Springs is Andy Samberg's best big screen turn to date. He's playing a character who's been in this predicament for some time, and at times is depressed at his fate, and at other times legitimately enjoys it.

Also impressive is Milioti, best known for her TV roles, who makes the most of a part considerably darker than most of those she's played up to this point. It's ironic that Milioti first came to prominence in the final season of How I Met Your Mother, which was set entirely against the backdrop of a wedding weekend. But Palm Springs is much better than that disaster of a television season.

The supporting cast also includes J.K. Simmons—in a fantastic turn as a wedding guest out for revenge—Peter Gallagher, Tyler Hoechlin, Camila Mendes, Dale Dickey and Jena Friedman, in a small but dynamite role as a wedding bartender. The time loop format has been executed in a lot of TV and movies over the last few years, including in the Happy Death Day horror movie series, and the Netflix show Russian Doll. But Palm Springs has done more with this gimmick than any movie or show since Groundhog Day itself.