First Cow is one of the better films to come out this year. A- 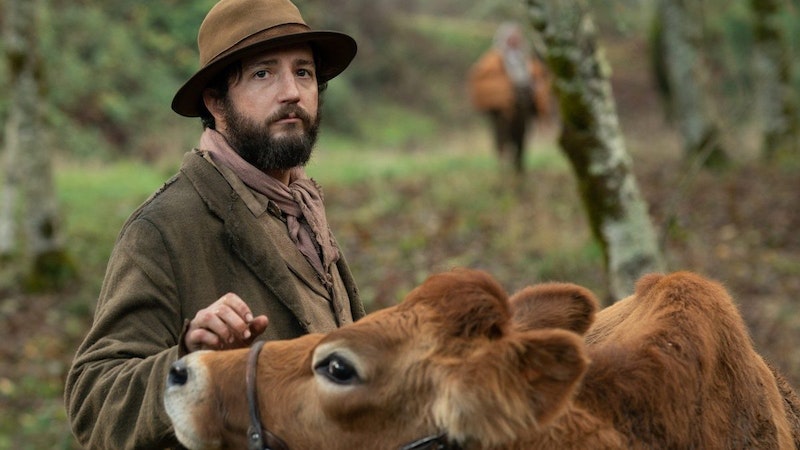 Call First Cow the slowest heist movie of all time. That's a compliment. The story of two men, a risky plan, a cow, and some delicious baked goods represent the latest trip to the frontier with director Kelly Reichardt is more fun than the plot sounds. It's the latest successful indie effort from Reichardt, the director of Wendy and Lucy, Meek's Cutoff, and Certain Women.

Her latest, First Cow, finally arrived last week after an unusually circuitous road to release. The film is based on Jonathan Raymond's novel The Half Life (Raymond and Reichardt co-wrote the script), and save for a brief present-day prologue, it's set in the early-19th century, in the Oregon Territory.

After these nightly illicit milkings, the two men then use that milk to make baked goods ("oily cakes"), which they sell to everyone in town, with an eye towards eventually heading south to San Francisco and opening a hotel.

Cookie and Lu spend most of the two hours of the movie trying to evade getting caught, and it's as nerve-wracking as most full-on thrillers. But it's also a very American story, as a tale of capitalistic hustle on the frontier, which recalls the best of David Milch's Deadwood. Reichardt's direction keeps up the tension throughout, and Christopher Blauvelt's cinematography handsomely photographs the Western scenery. The film is shot in a counterintuitive 1:33 aspect ratio.

Magaro, who's starred in such movies as David Chase's Not Fade Away and The Big Short, is magnetic in the lead role, as is newcomer Orion Lee as his partner. Jones, the English character actor, is quietly menacing as the main villain, and there are smaller roles for the likes of Ewen Bremner, Gary Farmer and Reichardt veteran Lily Gladstone. René Auberjonois also appears briefly, in what was one of his final roles prior to his death last year.

First Cow debuted to raves at Telluride last year and also showed at the New York Film Festival. It was supposed to come out in theaters in March, and had a press screening the week before everything shut down. It's now coming out on premium VOD, and despite mid-summer competition in the streaming and on demand space, First Cow is one of the better films so far in 2020.