On two very good and different explorations of Christianity in America: Yes, God, Yes (B+) and Blessed Child (B+). 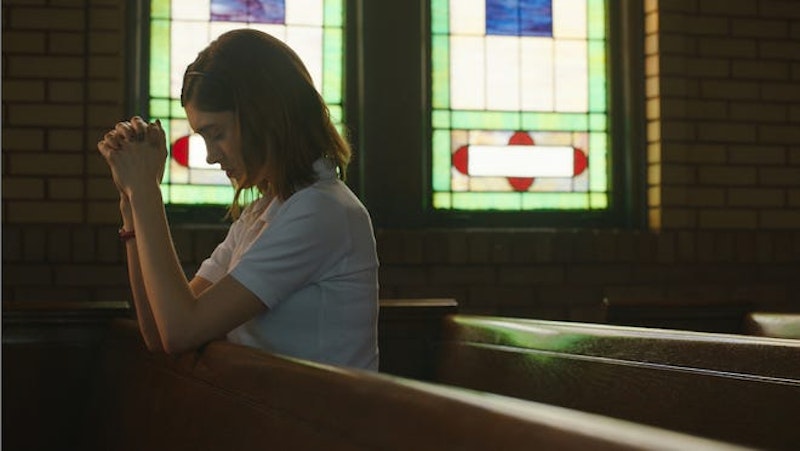 The film, which Maine wrote, directed and adapted from her own, earlier short film, is presumably autobiographical. It's also very funny and charming and showcases a cinematic voice with great potential. Yes, God, Yes, a 2019 Sundance debut, stars Stranger Things actress Natalia Dyer, as Alice, a 16-year-old Catholic girl in Iowa, who comes from the generation of teenaged girls for whom the car sex scene in Titanic was a formative sexual experience.

Francesca Realer, also from Stranger Things, plays a friend of Alice's, there's also a part for Alisha Boe, from that other Netflix teen show, 13 Reasons Why. Wolfgang Novogratz plays a potential love interest, while the great Donna Lynn Champlin, from Crazy Ex-Girlfriend, unfortunately doesn't get to sing.

Yes, God, Yes doesn't exactly ridicule Catholicism, but it does take a major stand in favor of sexual autonomy and against the shaming of sexuality. It's a movie that leads with two quotes—one from the Book of Revelation, and the other listing the official and Urban Dictionary-style definitions of "tossed salad."

Revelation also comes up in Blessed Child, in which an interviewee, in expressing his skepticism of organized religion, declares "read Revelation, it’s crazier than ‘Harry Potter!" Blessed Child, recently released on VOD, is an intriguing documentary about an underexplored subject: The Unification Church, also known as the Moonies. It's the church founded by the late Rev. Sun Myung Moon, known for mass weddings, financial shenanigans, purchase of media organizations, and frequent insinuations that it's a cult.

The director and narrator of the doc, Cara Jones, was raised in the church but broke from it as an adult, after leaving an ill-fated arranged marriage. The twist is while Jones and her siblings are ex-Moonies, her parents remained part of the church, but that doesn't mean they didn't remain a family.

The documentary has Jones reconciling that difference with her parents, while also interviewing various people who left the Moonie church. It's overlaid with Jones narrating her quest to become a mother, and also to pursue a non-arranged marriage. We're also introduced to Jones' brother, the movie's cameraman, who struggled growing up gay in the very anti-LGBT church.

Blessed Child is a fascinating look at how fundamentalist religion affects family. And while the doc doesn't make the Moonies look great, it doesn't leave out its compassion for the parents. This doesn’t fit so neatly into the basket with Unorthodox, or any of the other narratives that are primarily about the evils of religious orthodoxy and the courage of a singular hero in breaking away into happy secularism.

One compelling detail that's left out of Jones’ film? That two of Rev. Moon's many sons both relocated to Pennsylvania. One of the sons runs a church that blesses guns, while the other son… sells guns. It's a hustle that belongs in the hall of fame of American scams, and I'd watch a documentary about that.