Panned as crass juvenilia by critics upon release, 30 years on its poignancy endures. 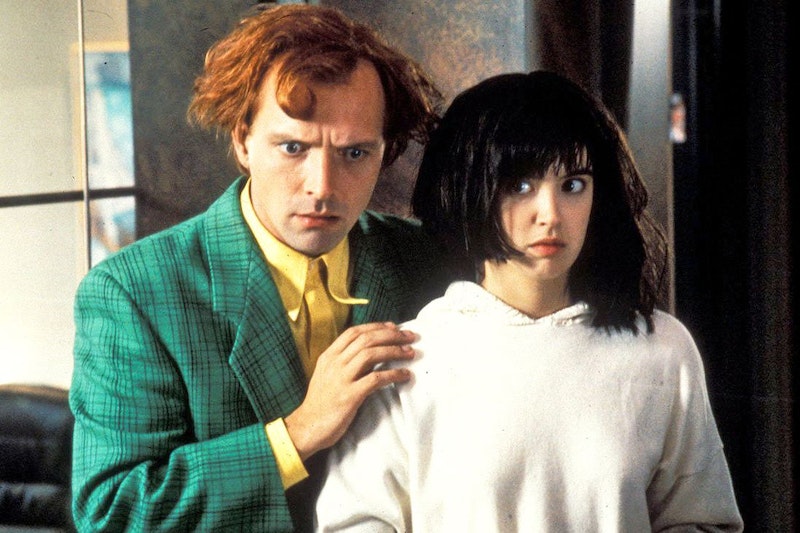 Drop Dead Fred is a 1991 “Black Comedy Fantasy Film” (according to Wikipedia) that came and went without much fanfare. It made a decent profit on a modest, roughly $7 million budget, but was noteworthy mostly for being lambasted roundly by critics of the period. The late Gene Siskel referred to it as “easily one of the worst movies [he had] ever seen,” Entertainment Weekly’s Owen Gleiberman gave the feature a “D” grade and singled out the late, legendary British comic actor Rik Mayall as “obnoxious” (not just his performance; Gleiberman referred to Mayall himself as “an obnoxious British actor”) and capsule review king Leonard Maltin described it as a “putrid mess… recommended only for people who think nose-picking is funny.”

It’s hardly a novel occasion when critics miss the mark on a movie (great filmmakers like Paul Verhoeven, Abel Ferrara, Brian DePalma and M. Night Shyamalan have routinely received scathing notices for efforts that have pushed boundaries and tackled tricky and meaningful thematic material in powerful fashion), but I’m surprised, given the lip service paid by media figures to concepts like “female empowerment” and “self care,” and the accompanying need for entertainment to portray them, that not only was the film so uniformly pilloried upon release but that it hasn’t recuperated in the intervening three decades. Beyond a small but loyal cult following that treasures the film as I’ve come to, its existence has scarcely been acknowledged since its original theatrical release.

The film stars Phoebe Cates, on the shortlist of the most beautiful women of all time and a fine actress with a number of excellent dramatic and particularly comic performances, in one of her last film roles before retiring to focus on motherhood and private life. Cates plays Elizabeth “Lizzie” Cronin, a meek young woman whose marriage to Charles (played by a slimy Tim Matheson) has fallen apart in the wake of his infidelity, leading to her going, on her lunch break, to the Jaguar dealership where he works to try and talk about their status, but Charles has little time for her and brushes her off in condescending fashion, as he’s more focused on trying to bed a blonde woman who’s browsing the selection of vehicles in the showroom. This leads Lizzie to call her friend and confidante Janie (Carrie Fisher, in the kind of “matter-of-fact, quick-witted career woman” role at which she was always excelled), but in the process her purse is stolen from her car, and then the car itself is stolen, leading to her being late getting back to her job as a court stenographer, resulting in her termination. On the way out she bumps into childhood friend Mickey (ubiquitous character actor Ron Eldard), who’s heading to court to finalize his divorce and custody proceedings for his young daughter. Upon Lizzie’s returning to her apartment Janie advises her to stand her ground and have a frank conversation with Charles when he inevitably comes home, but Lizzie’s mother Polly (the great Marsha Mason, outstanding as the overbearing ice queen, micromanaging and infantilizing Lizzie while withholding genuine affection at every turn) arrives and tells her she’s coming back home to stay and get herself together. Lizzie, with prodding from Janie, refuses and says she’s waiting for Charles, but the ensuing cut shows Lizzie slinking into her mother’s house behind Polly. Just 10 minutes into the picture and everything we need to know about Lizzie’s life and the way people view and treat her has been established.

The next major development is the return of Drop Dead Fred (the aforementioned Rik Mayall, portraying an obnoxious character but himself a genius of comedy, most remembered for great British series like The Young Ones, Blackadder and The New Statesman) the first night Lizzie’s back at her mother’s place. Fred is Lizzie’s long-buried imaginary friend, who, rather than being a sweetheart the way most such characters are depicted, is a wrecking ball of high-energy vulgarity and creative mischief-making. He mocks Lizzie for having grown “gross” and “old” and has little interest in allowing her to sleep and wants to get back into the pair’s old routine of driving Lizzie’s mother mad.

Perhaps just from what I’ve told you, you can see what the filmmakers (Dutch director Ate de Jong was at the helm, working from a script by Carlos Davis and Anthony Fingleton, based on a story by Elizabeth Livingston; Mayall is said to have been given a high degree of input on his character and performance) were going for. Despite its conceit of a grown woman returning home to be reunited with her childhood imaginary friend, who gives a manic comic performance, the film has little to do with juvenile toilet humor beyond the superficial level. The picture takes great pains to show us at every turn how completely passive and utterly defeated Lizzie is by the circumstances of and people in her life, juxtaposing scenes of her serving as a human doormat for her mother and husband with childhood scenes of her and Fred, nearly always conspicuously left to their own devices, sometimes following chidings from Polly, wreaking havoc. Lizzie, it’s shown, was a lonely child subjected to emotional abuse (a plot point involves her bearing the brunt of her mother’s frustration and anger for her father’s having left them after what is shown to have been a strained, rocky marriage) and that dynamic led to her repressing her emotions and losing all self-confidence and becoming a mere shell, always seeking to please others at the expense of her own happiness and deathly afraid of being alone. The bed and room in which she sleeps at her mother’s house is completely unchanged from when she was a child, and after the returned Drop Dead Fred causes trouble as the film progresses (seen, of course, as the doing of Lizzie herself by her mother and others), the doctor she takes the adult Lizzie to for treatment is a pediatric psychiatrist.

That people whose jobs it was to write film reviews noticed little of the thematic content on display and grappled with less of it is astonishing. It’d be one thing to think the film attempted to depict these concepts and failed, but for the vast majority of the critics who covered it to believe the movie is attempting to be a “gross-out comedy” rather than the portrayal of a wounded, lonely woman who’s lost touch with herself and is attempting to recover her own ego, is further evidence of how completely bereft of worth mainstream film coverage has been through the years.

Mayall has the showiest role throughout the film and his performance is appropriately kinetic, somewhere between Robin Williams in one of his more high-octane roles, Jim Carrey in Me, Myself & Irene (another underrated film about a character in a psychic crisis) and Micheal Keaton in Beetlejuice. It’s telling that some critics even compared “Fred” to the latter, but missed that the obnoxiousness for which they derided the turn and the picture were intentional, as in Beetlejuice! Drop Dead Fred is shown, particularly following the visit to the doctor where Lizzie is prescribed an unnamed medication to “block the appearance of the imaginary friend,” to be a manifestation of her repressed emotions, creativity, energy and need for attention and love, and it’s only logical that that glut of needs and emotions and desires rendered flesh would be a bit much to take.

Cates, meanwhile, portrays her character’s fragility, pain and doe-eyed timidity wonderfully, commanding the screen while at the same time generously ceding most of it to whoever is sharing the scene. When Fred is absent, though, and we see his mischief and madness from an alternate viewpoint—and, thus, Lizzie is depicted as the one behaving in an out of control fashion—Cates proves capable of carrying that off as well.

The only critic of whom I’m aware who has dealt with any of this, or given this picture anything like its due, is not a critic at all. A composer named Carl J. Schroeder wrote, in a publication called Mystical Movie Guide, an appreciation for the film that I’d very much like to read, but alas I’ve only seen the following, wonderful excerpt: “The imaginary friend is cavortingly rude for a reason; he served to push the girlchild to do mischief for attention and as a cry for help. Now grown up, the woman has forgotten and is about to lose her soul, so events call for some kind of literal return of her demon to force the exposure of her pain. This psychic crisis is poignantly realistic… the creature who is visible only to the woman is like a poltergeist energy of her repressed self, a problematic ego container into which her powers of assertion and creativity were poured and stored. The movie's resolution is startlingly beautiful.”

I don’t want to “spoil” the events of the film, but I must at least talk about its climax, described accurately as “startlingly beautiful,” by Schroeder. The movie is less about its plot and events than it is the way in which they unfold and their significance (as is the case with anything not seeking to simply act as a momentary diversion for its audience) anyway. The sight of this woman, who by the end of the film has completely buried her self-respect in an effort to win back a husband who she’s shown to her face is cheating on her, and is persisting in taking the pills that are killing “Fred,”—becoming visibly sick and lethargic, pleading weakly with her not to take the pills while she, too, becomes even meeker and more desperate to please, the natural outcome of poisoning the embodiment of her repressed ego—snapping out of this zombie state after a metaphysical journey into “Fred’s” realm, where she stands up for herself at least, extricating herself from the shackles that’ve constrained her for more than 20 years, and learns to love and respect herself again, is incredibly poignant and powerful.

It depicts so wonderfully the sorts of things that critics have bent over backwards and twisted themselves into pretzels reading into assembly-line, focus-grouped corporate junk like Captain Marvel, and its emotions feel real to us by virtue of their being so hard-won. We want to see Lizzie succeed because she’s a good person who has gone through relatable experiences and has, finally, come out the other side of her darkness and returned to the light.