The gag reel at the end is the best part. D 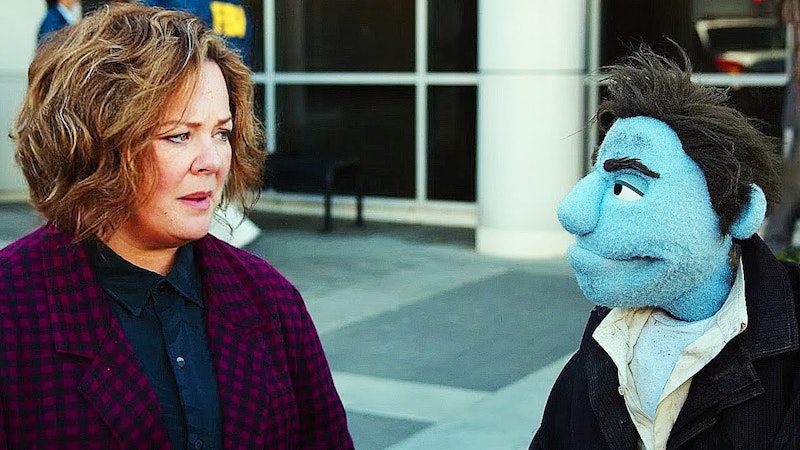 The Happytime Murders uses a gimmick that’s been put to much better use in a variety of other projects, such as Team America: World Police and Sausage Party, the TV shows TV Funhouse, Bojack Horseman and Wonder Showzen, and the Broadway musical Avenue Q. It’s a movie in a style and genre mostly associated with children, except it’s R-rated and reliant on the incongruent shock of its vulgarity.

The film has some decent gags at the margins, but its central conceit is never especially funny, and its plot drags despite a running time that’s barely 80 minutes. Even worse, Happytime Murders doesn’t have anything satirical to say about the genre that it’s supposedly parodying.

Directed by Brian Henson, the son of the legendary Muppet creator, and released through a Jim Henson Co. subsidiary called Henson Alternative, The Happytime Murders borrows the humans-and-puppets-coexist conceit from most Muppet projects of the past, while making it both R-rated and really gross.

I’m not objecting on the grounds that it’s wrong for Muppet-like characters to curse, screw, and kill, all of which they do in Happytime Murders. The original Muppets got ribald at times, especially in the 1970s, and when done right this sort of thing can be hilarious and even poignant (Avenue Q is both, as is Bojack.)

The problem is that the central gimmick here isn’t funny enough to carry the film, the execution is even worse, and the main puppet characters aren’t interesting or memorable.

A pseudo-noir detective movie in a Los Angeles where puppets and humans live side-by-side, Happytime Murders lifts the majority of its ideas from either Avenue Q or Who Framed Roger Rabbit. Phil Philips (Bill Berretta) is a puppet private eye and disgraced ex-cop. When a serial killer starts killing off the cast members of an old puppet TV show, Phil must re-unite with his human ex-partner Connie (Melissa McCarthy) to solve the killings and get his good name back.

The biggest problem is that nothing about the main plot, the Phil/Connie relationship, or the murders, is funny. Phil’s a notably unfunny character, and the same goes for the main puppet characters. There’s far from the best work of any of the human actors, either, and the murder mystery plot is a dud too.

This won’t go on any career highlight reels for McCarthy, Elizabeth Banks, or Joel McHale, although a surprise name in the credits is Kevin Clash, the former Elmo puppeteer, who lost that gig a few years ago after sex abuse allegations but is now apparently back to work in good standing.

Happytime Murders is just one swing-and-a-miss after another. Most noir parodies at least look cool. But this film’s version of Los Angeles is unimaginative, as every exterior shot looks like it was filmed on the same street. It’s especially weak considering how many movies in the last five years (like La La Land, Cafe Society and The Nice Guys) have gotten L.A. right and made it beautiful.

And there’s also a half-hearted racial allegory that, shades of last year’s sorry Will Smith movie Bright, the film doesn’t commit to nearly enough for it to have been worth the trouble.

The 2011 Muppets movie (the one with Jason Segel) was great for all sorts of reasons, but one of the best was that it had a movie-long arc depicting a character coming to terms with his identify as a Muppet. Happytime Murders ends with an inspired gag reel, including the how-they-did-its of the some of the puppeteering. When that’s one of the highlights of a movie, it’s never a good sign.