Arbitrage is one of the best post-Lehman films. 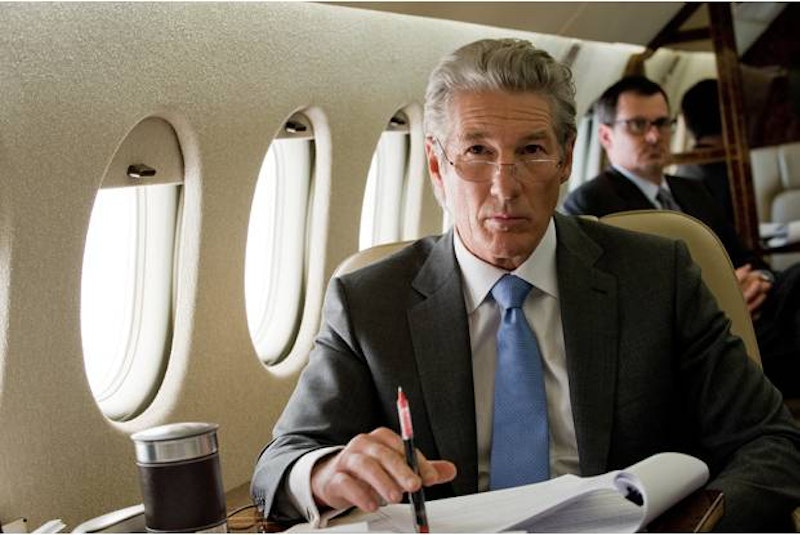 Arbitrage is the kind of the movie you might trip over whilst channel surfing at ungodly hours, living room lit only by your TV set glow and an unforgiving view of some neon hell next door. It’s designed to be played late at night on USA, TBS, or FX, with insufferably smug “DVD-ON-TV” interludes from Dave Holmes and Jennifer Lothrop about how the level of water in Richard Gere’s glass changes throughout a boardroom scene (huh, neat). None of this is necessarily bad; Arbitrage is just a simple movie, but a stellar one that wastes no time and remains thoroughly entertaining and engaging throughout. Gere reminds us that he can be a menacing, vindictive son of a bitch as well as America’s sexiest and most eligible silver fox in this picture. No other recession-inspired Wall Street boogieman conspiracy films have been as lean or concise as Arbitrage, and if you know more Law & Order storylines than members of your own family, seek this film out.

Gere’s Robert Miller, a Madoff-esque hedge-fund manager with a beautiful wife, daughter, son, and mistress, is driven by always getting more and more. A merger with another firm is on the rocks because of a missing $412 million Miller frittered away in some ill-conceived mineral investment in Russia—bottom line, he’s deep in fraud, and as the fake audit is about to pass, he accidentally kills his mistress when he falls asleep at the wheel and rolls over the highway. He escapes, but leaving enough evidence for Detective Michael Bryer (played by Tim Roth with a seriously botched Noo Yawk accent) to pin him down at all costs. The son of Gere’s former driver (black, of course) picks him up from the highway, and becomes the missing piece in Roth’s eyes, and the rest of the film is a bitter struggle between getting the young man to snitch and Gere gracefully letting the right people in and giving the right people enough money.

What’s so refreshing about Arbitrage is it just lets itself unfold before you, skipping any hackneyed or cringe-worthy “teachable” moments of clarity when a character verbalizes the entire movie’s thesis somewhere in the middle of the third act. It simply happens, and it all happens so quick you’re left to think about it once it ends (rather abruptly), as you should. Gere spends his time being his supreme alpha-male American businessman, liberally using the phrase “You’re fucking me!” with regard to tardy audits. Perhaps the most self-aware moment comes when Gere’s Harlem accomplice admits he wants to take the money he has and buy an Applebee’s franchise in Northern Virginia, to which Gere responds incredulously, “What’s an Applebee’s?” I can’t think of a better way to show how out of touch and blinded by wealth a person is than that statement. It sums up just about everything evil and awful about Gere’s character, who frequently makes the point that “there’s nothing else but M-O-N-E-Y.”

So often, and we’ve seen a lot of them since 2008, these points that we already know are made in such blunt and less than artful terms so as to induce in-theater emesis. Finally someone gets it right. First time director Nicholas Jarecki has a masterful eye, a great sense of pacing, and though he might not have been involved with it, the score is superb, very minimal and consisting mostly of warm, ominous mid-bass tones, maybe if The Terminator soundtrack was stripped down and updated for today. Go see Arbitrage if subterfuge, political drama, or upper crust misbehavior is your thing; it’s prime, prime cream.