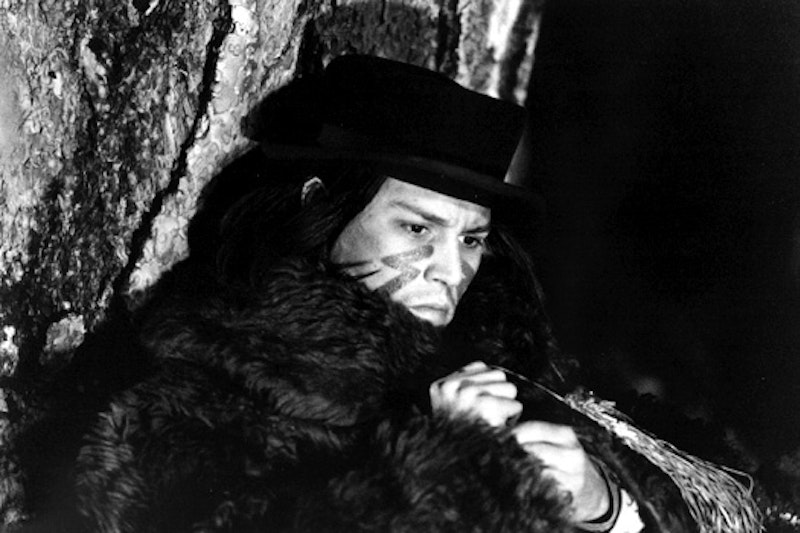 A few thoughts on Dead Man, Jim Jarmusch’s forgotten 1995 masterpiece best described by the man himself as a “psychedelic western”: it might be the best thing Jarmusch has ever done. Johnny Depp’s William Blake goes from a nerdy, buttoned-up wannabe accountant from Cleveland in a goofy plaid suit and eyeglasses to wielding a six shooter, wearing hides he’s skinned himself, and strutting around with blood on his face and a bullet lodged in his heart accompanied by his American Indian companion Exaybachay, or He Who Talks Loud and Says Nothing. Blake kills a bandit and instantly becomes a wanted man. Throughout, we see his transformation from nervous flit to cool killer whose “poetry” comes through his gun. Cameos abound: Crispin Glover (delivering a uniquely creepy and intense monologue that only he could pull off), Billy Bob Thornton, Iggy Pop, John Hurt, and Robert Mitchum all pop up briefly in this aggressively post-modern western.

I imagine Dead Man got swept under the rug in the post-Pulp Fiction hustle and wave of imitation films and cheap knock-offs all bending over backwards to be post-modern, subversive and referential as possible. Circumstance doesn’t take away from the fact that this is a masterful movie. Jarmusch managed to create a Western that feels thoroughly of its time in composition, lighting, dialogue, and especially the haunting, super minimal dirty instrumental guitar score by Neil Young.

Several characters are named after 20th century cultural figures, yes, but more importantly, the elegant dialogue feels at once perfectly period and very, very 1990s (when Blake first meets his doomed mistress, he stares and she pouts, “Why don’t you just paint my picture?”; Iggy Pop as a granny in drag; vivid and upsetting gore; loaded with the usual nonplussed Jarmusch air).

This is the movie the Coens could’ve made with True Grit if they didn’t want to make a “real” western. Honestly, who wants to see another one of those? John Wayne is dead, thank God! Dead Man blew my mind by being a revisionist western in style only— it’s period accurate, with a much truer depiction of Native American culture than any of the classics. Dead Man takes all the wonderful elements of the genre—violence as poetry, lone bandits on the run, hired guns, vicious cannibal thugs, spiritual ascension—and jettisons all the stale right-wing iconography, hokey music, imagery, and sing-songy manner of conversation that makes so many vintage westerns incredibly unpleasant to watch.