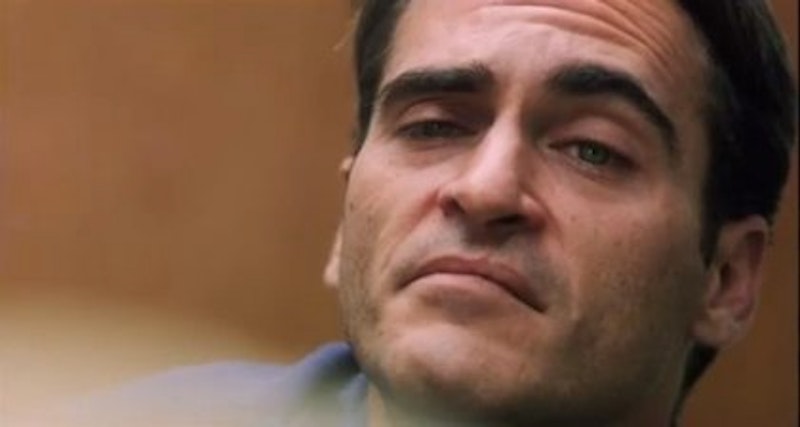 Watching Paul Thomas Anderson’s The Master was an exercise in severe, numbing disappointment. I saw a packed late afternoon matinee on opening day in Baltimore, along with at least a hundred other cinephiles, old folks, a few local celebrities, and a smattering of people below the age of 45. There was a muted but palpable excitement in the theater as we waited for The Master to begin—coming on the heels of the epic and compelling There Will Be Blood only a brief five years ago, not to mention Anderson’s four other masterpieces, how could his latest be anything but magisterial? Winding up, it is: the film is a wonder to look at and Mihai Malaimare Jr.’s cinematography is just as mesmerizing as Robert Elswit’s. And we all know by now how intense, feral, and terrifying Joaquin Phoenix is as the unhinged, animalistic WWII vet Freddie Quell, a walking erection who reacts to trauma and even minor distresses as an exposed nerve. He is brilliant.

Philip Seymour Hoffman’s Lancaster Dodd is similarly well-played, a man as emotionally fraught as Freddie but with a veneer of civility that he betrays all too easily (screaming “pigFUCK!” at an inquisitive and accusatory doubter at one of his many cult fundraisers/get togethers). The whole thrust of Dodd’s cult is that “Man is not an animal,” yet Freddie and Dodd demonstrate throughout that this is simply not true: all of man’s civilizing frameworks—philosophy, religion, dinner parties, politics, art, publishing—are simply man’s innate urges to dominate and control under a thin mask.

These are fascinating ideas and I expect nothing less of PTA to make a film that sticks in your head like a stone for weeks afterwards. Unfortunately, The Master never truly delivers. These ideas and their predictable conclusions could all be easily gleaned from the promotional materials. About an hour in, both times I saw it, you feel that excitement souring fast, and by the two-hour mark, pretty much everybody was squirming in their seats waiting for the end. What a far cry from the ecstatic, enervating close of There Will Be Blood, with its triumphant killing in cold blood followed by an inspired Brahms music cue.

Like The Tree of Life, that ungodly pretentious and worthless Baby Boomer mess that Terrence Malick spat out last year, this film feels like a series of scenes to be watched and amazed by, but with no backbone or forward drive to take us somewhere new. The Master is still leaps and bounds better than The Tree of Life or embarrassing indulgences like it. It’s not an insult to call this film a noble failure. Anderson reportedly improvised heavily during shooting and cobbled together what we see mostly in the editing room. Good for him for stretching his abilities, but it really pains me to say it just doesn’t work in the end, which is so frustrating because almost all of the moving parts are brilliant on their own—Jonny Greenwood’s haunting and dissonant score, the two lead performances, the lush cinematography, and PTA’s signature aesthetic and refreshing ambiguity—but they leave its laces untied. There’s certainly a lot to unpack, and maybe like Kubrick, we’ll revisit The Master and see how masterful it really is (which I sort of doubt, considering the critical consensus already gushing). But this film doesn’t connect; it asserts itself with little to say and no surprises to offer. A noble experiment, but a failure. Let’s hope PTA’s Pynchon adaptation, Inherent Vice, is more exciting, and maybe it’ll come out before 2017!