Undead Gold Out of This World

Frankenstein Meets The Space Monster (1965) is a majestic cinematic tapestry that couldn’t exist with a big budget. 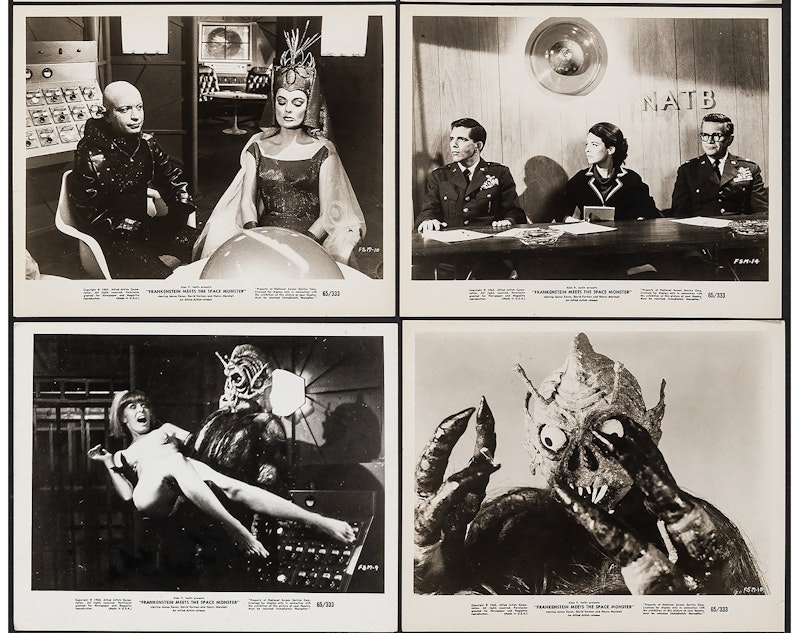 Wisecracking fans of films that are so bad they’re funny often cite Frankenstein Meets The Space Monster as one of the “greatest worst movies ever made” simply because the picture refuses to hide its financial shortcomings, nor does it demand that viewers suspend disbelief. These blatant anti-Hollywood elements actually make the picture an awesome work of art. Carefully pieced together by director Robert Gaffney, 1965’s Frankenstein Meets The Space Monster is a cinematic tapestry that couldn’t exist with a big budget.

The opening sequence ushers us into a nebulous tableaux not seen again until Kubrick’s 2001: A Space Odyssey (Gaffney did technical work on that film). Comprised of public domain material shot by NASA and the U.S. military, this psychedelic film collage forms the jumping off point for the tale of tragic astronaut/ultra-lifelike cyborg Frank Saunders (Robert Reilly; it’s eventually explained that Frank represents a futuristic “Frankenstein” monster). As the android’s first space exploration launches with ease, his destiny entwines with the desperate plight of the insane alien crew of a space ship orbiting Earth. The purpose of their visit: to find women who’ll bear children for the new dawn of Martian civilization. Dr. Nadir (Lou Cutell, looking more like a skinhead glam rocker than an alien villain) and Princess Marcuza (B-movie luminary Marilyn Hanold) spearhead the operation. The grim duo exude paranoia and cynicism, byproducts of their insecurity as members of a terrified breed that nearly eradicated itself and its fertility in an apocalypse.

Their unhinged but steely determination pushes them to focus on pre-emptive self-defense, so when Frank Saunders’ space rocket comes within close range of the Martian ship they blast it to bits. Frank then crashes to Earth without a parachute. He ends up in Puerto Rico, plagued by computerized brain glitches that send him on a murderous rampage until his creators track him down where he’s found cowering and shambolic in a grotto.

A high-energy original soundtrack illuminates the tense atmosphere in many scenes, but one sequence in particular benefits from the calming presence of music. “To Have And To Hold” by New York band The Distant Cousins is a sublime Beatles-esque folk pop tune that plays as Frank’s creators (James Karen as Dr. Adam Steele and Nancy Marshall as Dr. Karen Grant) cruise the streets of San Juan on a Vespa in search of their wayward man-machine. A high noon sun and gently swaying palm trees zap any suspense out of this sequence, as do the crowded town’s charming cobblestone streets, Spanish architecture, and the dulcet tones of chiming acoustic guitars. Steele and Grant can’t move fast in this environment, there’s just too many people around and a Vespa has only so much power. Here the film’s pace is charged with dynamic slowness. They brace themselves, enjoying the ride, decompressing a bit as Frank’s unfortunate fate emerges.

Unlike other rubbery terrors of yesteryear, the chintzy costumes and special effects make-up created by FX artist John Alese and costume designer Anna Hill Johnstone give an inimitable look and feel to the Martians, the post-crash Frank Saunders, and the aliens’ hairy guardian space monster. Saunders’ deformities invoke the horror of a scrambled A.I. device with agonizing detail. You feel Frank’s struggle unfold with each shaky step through the rugged Caribbean wilderness. His face is caked with glistening blood, torn flesh, sweat, and circuitry.

Overall, the film’s violence never seems gratuitous or exploitive, rare for a movie featuring a giant fanged space gorilla and pivotal scenes where scantily-clad young girls run around screaming. Even when the Martians disintegrate a few glamorous kidnap victims there’s no bondage, blood, or gore. When giving their deathly orders the Martians take no pleasure, they simply nod “yes” or “no” with the glum diligence more commonly brandished by quality control inspectors on an assembly line.

Nancy Marshall gives the best performance here. As Dr. Grant she’s always trying to figure things out from a rational standpoint even while her brain keeps running into one scientifically impossible plot point after another. It’s implied that her connection to Frank is more like that of a mother or sister than whatever bond might form between an inventor and a fancy gadget. That key relationship is one of the things that makes this movie more than fodder for some snotty film buff’s riff trax session. With convincing performances constantly juxtaposing a parade of overtly fake B-movie aesthetics, Frankenstein Meets The Space Monster reveals that the suspension of disbelief is never a prerequisite for cathartic fantasy.