Shazam! Says We Are Family

Multicolor haven in a heartless world. 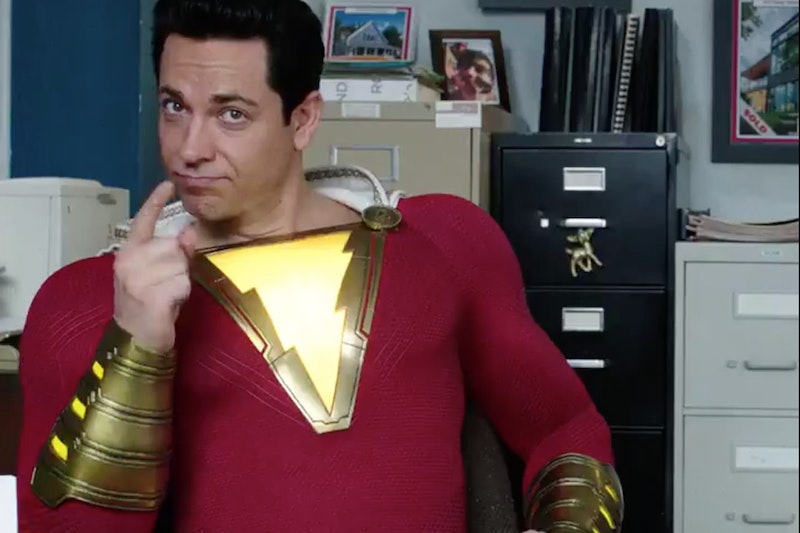 There’s a lot about family in the world’s newest superhero film. In fact there’s so much that Shazam!’s big plot twist will be guessable by anybody who knows American comic books from the 1940s. Still, I never saw it coming. My prep time from age 12 does allow me to appreciate the twist’s adroit literary dimension. I can also report that, as twists go, this one is solid. It’s not just a surprise, it’s one that leaves you feeling the movie is on course and true to itself. Shazam has the problems you’d expect from a B+ superhero film (extended noise, billowing CGI, the occasional forced plot development). But it’s a lot of fun. That’s only in part because of the skill displayed by all hands and the silliness of a hero with such a big red chest and such a dainty white cape. The fun sinks in more deeply because we’re reminded why we need each other. That’s family again—in this case a foster family, a group that made the decision they all belong to one another. Past certain well-lit limits, the world can turn dark very quickly. Shazam tells us a story about people who pitch in together to hold back the darkness.

This isn’t at all the spirit of the original. When he was a big deal, Captain Marvel presided over a bright, simple world where the villains seemed possessed by mind-spinning degrees of whimsy. Dr. Sivana, the Captain’s chief opponent, was usually seen smiling; he called his foe the Big Red Cheese, supplying one of the few really good jokes in superhero history. What’s more, Sivana was an oddity, a gnome swathed in a lab coat and sporting a nose the size of a house pet. The movie’s Sivana is a man, not a freak, and he does nothing for giggles. As a child he was never loved; now there he is, off by himself, ready to chew up the world and show everybody he’s a big deal. The new Sivana follows the approved pattern for explaining supervillains, and this pattern fits well with the movie’s theme. But the character is less than he was.

This isn’t the fault of Mark Strong, who plays Sivana as a latter-day Dennis Hopper. The rest of the cast is fine too: Asher Angel as young Billy Batson, Zachary Levi as the adult-size superhero he turns into, Jack Dylan Grazer as Freddy Freeman, the hero’s sometime buddy, and on down the line. Superhero movies take comics and make them seem real. The reality in question may be a halfway house between print and us, but the comics have to take that big step closer for the movie audience to accept them, and watching the step get taken is a treat for long-time fans. Superhero comics often give it a shot by themselves, most notably when Batman was reclassified from straightforward crusader to raging neurotic. Shazam!’s highly capable production design (check out the décor of Billy Batson’s foster home) realifies our hero and his world, and so does the decision to change Billy Batson from an apple-cheeked young stiff to a confused kid bouncing between foster homes. Again, this change plays into the movie’s theme; in fact the change undergirds it. The boy has to fight for love and safety, as most of us do in one way or another.

A second change also helps finesse the switch between ancient print cartoon and modern-day entertainment. Then and now, the series’ key idea is that young Billy shouts Shazam and a bulky adult superhero appears in his place. In the old days this arrangement was a revolving-bookcase sort of thing. That is, the hero and Billy were two separate people, and one would spin into existence and the other out of existence. The movie makes them the same person, so the adult hero’s actually a 14-year-old boy in a transformed body. This allows Billy to learn and grow—sorry, to have an arc—as he faces the movie’s bad guys. It also finds the right comic note for the movie to hit. The hero has to be funny because his outfit is so cornball.

Classically, the series humor came from whimsy; for example, a recurring villain was a talking tiger who carried a cane and wore loud plaids. He was even named Tawky Tawny, a jeu d’esprit that the modern spirit couldn’t abide. But goofiness goes down fine. Everyone knows 14-year-old boys do goofy things, and these things become goofier when a man in a cape is the guy doing them. Throw in a brief homage to Big (an enlarged, lit-up keyboard appears in a toy store battle) and everyone knows where they’re at. It’s not a bad place either.

About the name. The movie’s superhero has to go by an alias nowadays. Really he’s Captain Marvel, and a long time ago he sold a lot of comics. Then the owners of Superman won a court case and the comics were shut down for copyright infringement. Superman’s owners bought the rights to the Captain and eventually brought him back. But they did this after letting Marvel Comics acquire the Captain’s name. Now the Captain is called Shazam, for the magic word he yells out. It’s a small sacrifice to see him make it into today’s world.