In the last few seconds of the finale. 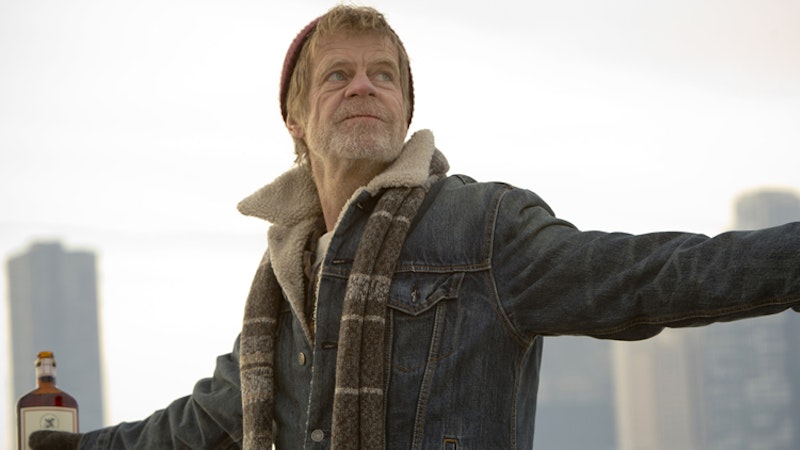 When I last checked in with Shameless a year ago, I was cautiously optimistic that the season three finale would prove to be a real turning point for the show. I wanted to believe, for example, that Steve was really dead, killed off by his Brazilian drug czar father-in-law Nando for failing to save Estefania from deportation. It's not that I had anything against Steve—his romance with Fiona in season one really was Shameless at its best—it's just that his character had run out of things to do; with story arcs that were totally unrelated to anything else happening on the show. Likewise Frank, who'd finally drank and snorted himself into liver failure, and Karen, who was left an infantilized gork after Mandy ran her down with her car. Season three was mostly just raunchy cable comedy so it was exciting that the writers were finally taking a back-to-basics approach.

Not so. The season four finale aired last weekend and Steve (or Jimmy, or now, apparently, Jack—and here on out referred to as JJS) turns back up in the final seconds—seriously, the credits are half over and they cut to a scene of JJS sitting in a car out front of the Gallagher house—which has prompted mix fan reaction but I have no hesitation in saying is the stupidest thing the show has ever done. Honestly, who wanted this character back? The writers are obviously setting up a rekindled romance between Fiona and JJS but at this point who cares anymore? In retrospect, we all should’ve known when it was only suggested that Nando shot JJS—when we didn't actually see his bloody body thrown into the ocean—but after a whole season without him, and after John Wells confirmed last summer that Justin Chatwin had in fact left the show, I thought that was it. But as Wells told TVLine last week: "The audience kept telling us that they didn’t know what had happened at the end [of last season], so we thought, ‘I don’t know, maybe we’ll take advantage of that and go with it.'" Take advantage is all too apt a way to put it, and I'm not at all looking forward to JJS explaining where he's been since season three—I swear to God if he says he killed Nando and took over his smuggling operation I'm done.

Then there's Frank, who spent season four trying to con his way into a liver transplant while downing Vicodin and Percocet. Yes, there were affecting scenes along the way: when his daughter Sammi brings the Alibi Room to him, for example, giving Frank what looks to be one last day at the bar; or when Dr. Zabel—played somewhat hilariously by ER alum Scott Grimes—explains to Frank just how grim his situation is, and Frank realizes none of his “You don’t know us Gallaghers” bullshit will save him. This could’ve been a season of Frank making amends to the family he’s wronged for so many years; instead it ends with a truly bizarre twist, as Sheila marries Frank in some sort of Native American adoption scheme (which doesn't work)—let’s not even go into how unnecessary Joan Cusack’s character is at this point; at least she’s occasional comic relief—and then Frank is, miraculously, moved to the top of the transplant list and given a new liver—as the doctors explain: “He’s in serious condition so they moved him up the waiting list.” Of course that's no truer than it was at the start of the season, but okay, maybe just don’t think about it too much. Afterwards, when Carl wheels him out of the hospital and down along the Chicago waterfront, he takes a swig of whiskey, and taunts God (or maybe the audience) that he’s not dead—“Is that all you got?”

There were some amazing episodes along the way; Carl and Debbie in particular really came into their own, finding love where they probably shouldn’t. For Carl, it was another delinquent he met in school detention, Bonnie, who lives with her family in a van and who steals cars and robs convenience stores with a loaded gun. For Debbie, it’s 20-year-old Matt, who’s conflicted about the two’s age difference, eventually telling her they’d have to wait till she turns 16—which prompts Debbie to make a very sparkly countdown banner.

Meanwhile, Lip has a rough start at Chicago Polytechnic, failing papers and exams—a plot line I found somewhat ridiculous, since the first three seasons set him up as a kind of Good Will Hunting whiz kid, and no freshman in a 100-level lit survey has ever been taken to task for turning in a derivative essay. Still the later episodes, after he hooks up with his roommate’s ex-girlfriend, Amanda, who takes a bizarre pleasure in organizing Lip’s schedule and uses him to piss off her parents, are superb. When Fiona loses her job and, later, is thrown in jail for some cocaine-related delinquency—seriously, what’s with all the women’s prison fetishization on TV lately?—Lip has to balance college and work with taking care of the family and we find out he’s better at it than Fiona ever was.

Best of all is Ian and Mickey’s wild love story. After a few episodes’ absence, Ian shows back up working as a dancer in a gay club. Evidently, he went AWOL from the military after trying to steal a helicopter, and turns more and more erratic as the season goes on. In the second-to-last episode, Mickey outs himself to friends and family at his son’s christening, prompting a bar brawl with his father Terry, who’s then hauled back to jail for parole violation. In the finale, we find out Ian is likely bi-polar, just like Monica, and the tender way that Mickey strokes Ian’s face as he lies in bed, tells you that their love is truly the heart of the show.