Still More Proof That Happiness Is An Illusion

On Todd Solondz’s Life During Wartime. 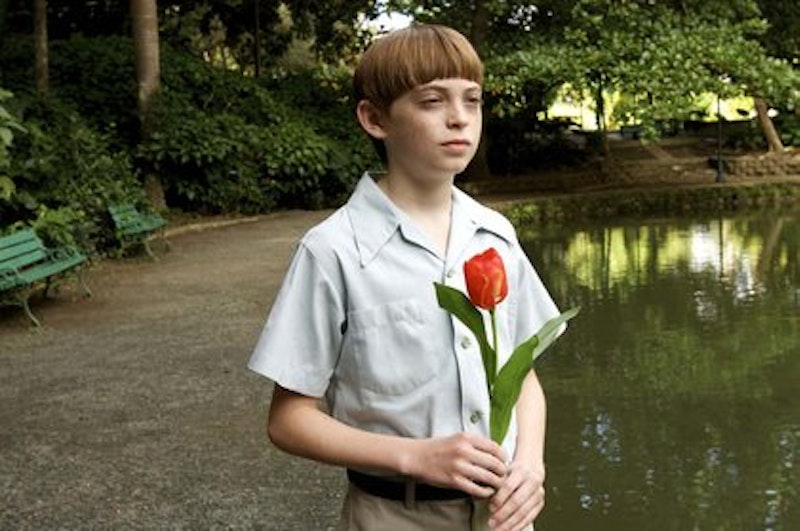 I did not watch Life During Wartime (2009) out of any deep appreciation for the dramatic abilities of Paul Reubens. I did not watch Wartime because I enjoy movies set in Florida. I did not watch Wartime because I believe in the all-absolving power of forgiveness. No, I watched Wartime because a) I didn’t feel the drive to write anything that evening, 2) because I couldn’t think of anything else to rent via iTunes, and 3) because Wartime remained the sole gaping hole in my gradual intake of blackly comedic Todd Solondz-sired cinema. The experience was neither a letdown nor a complete waste of time, but ultimately confirmed the suspicions that kept me away from the film for so long: that this was, in fact, both a cheap gimmick and the least satisfying entry in Solondz’s oeuvre.

Wartime is a sequel to 1998’s Happiness, a wry and miserable study of an extended New Jersey family, all of whom are hopeless and hopelessly deluded. One of them is a pedophile, another a spineless loser, another a chic snob, and so on, portrayed note-perfect despair by the likes of Phillip Seymour Hoffman, Jon Lovitz, Dylan Baker, Jane Adams, and Cynthia Stevenson. Damaged and oblivious to that damage, those characters haunted the viewer once the credits rolled. Two films later, in 2004’s Palindromes, Solondz thought to parade a series of violently dissimilar actresses to play the main character, a pregnant teen, a stunt that felt as inspired as it did manipulative. For Wartime, that idea got a twist: the auteur resurrected the original Happiness no-hopers several years later, only—dig this, bro—with totally different actors stepping into the roles.

This rigged dissonance adds an extra freakish dream-logic skein to Solondz’s already gently twisted sensibilities; an early discussion between a mother and a son about a date the mother has returned from is profoundly, deliciously inappropriate, and (unfortunately) telegraphs what will happen at the end in a way that helps explain why the son has been given to believe his father is dead, when in actuality he’s locked up in prison for molesting the son’s older brother’s friends in the first film. As I indicated earlier, Wartime is a movie about forgiveness in its purest form, and the ways we manage to mangle and redirect it to suit our purposes and preferences. The script is full of philosophical angles and feints that are interesting in a theoretic sense, but are laden and sodden in practice; the effect is that the viewer is inclined to consider everything else, like the fact that, somehow, the natural vibrancy of Florida in this movie is no match for the dull matte blah of the original—the former having the life snuffed out of it by polemics, while the latter bore its titular theme loosely, without such a determined sense of solemnity.

There are some things to like here. For instance, I quite enjoyed Ally Sheedy—taking over for Laura Flynn Boyle as solipsistic poet/screenwriter Helen Jordan—skulking rat-faced and caustic through the open concept layout of a Hollywood Hills mirage, sinking her teeth into what here is a minor role. Rich Pecci—who appeared as the hapless Make Weiner in Palindromes and Welcome to the Dollhouse—only receives a handful of scenes as a nattering, China-obsessed nabob, but the sadness he exudes is profound. Allison Janney—as Trish Maplewood, taking over for Stevenson—elevates every picture she shows up in, but this is the first one where we watch her get nasty, totally and voyeuristically naked, up against a hotel room wall, hair askew. A just barely perceptible drift into magical realism in the third act seems earned and unearned, as if the entire movie is the audience’s fever dream (or the director’s) of what a Happiness sequel might consist of, as opposed to a work of fiction in its own right; it lays the groundwork, in a way, for the territory Solondz would colonize more successfully a few years later, in Dark Horse. The presence Charlotte Rampling’s vamping hotel-bar head case, who seems to have wandered in from some femme-fatale noir, twists the ambience in odd knots in the early going.

I looked askance at the choice of Shirley Henderson to take over the role of Joy Jordan from Jane Adams; Adams’ washed-out lassitude suited the character’s failed folkie/social worker mien almost to a T, while Henderson personifies the phrase “shrinking violet” a bit too perfectly, this shrew-like, girl-woman Smeagol creature who’s unbearable to look at for more than a few seconds. She’s almost too much on the nose, yet—yet—the hallucinatory mania that overtakes her as the film progresses, with the personas of dead boyfriends and husbands sidling in to haunt, torture, and attempt to assault her with increasing frequency, befits Henderson more than Adams. This particular plot thread penetrates more, in the end, than anything else that happens in Wartime. Watching, one can easily imagine the escalation of this condition, the stints in mental hospitals, the padded cells, the administration of various anti-psychotics, a family that already is unable to disguise their pity for her gradually forgetting about her as life inevitably rolls on, and on. There’s probably another sequel in that premise alone, but I’m really hoping that Solondz will resist the urge to make it.