My Great Idea for Star Wars

A franchise can step out sideways from itself. 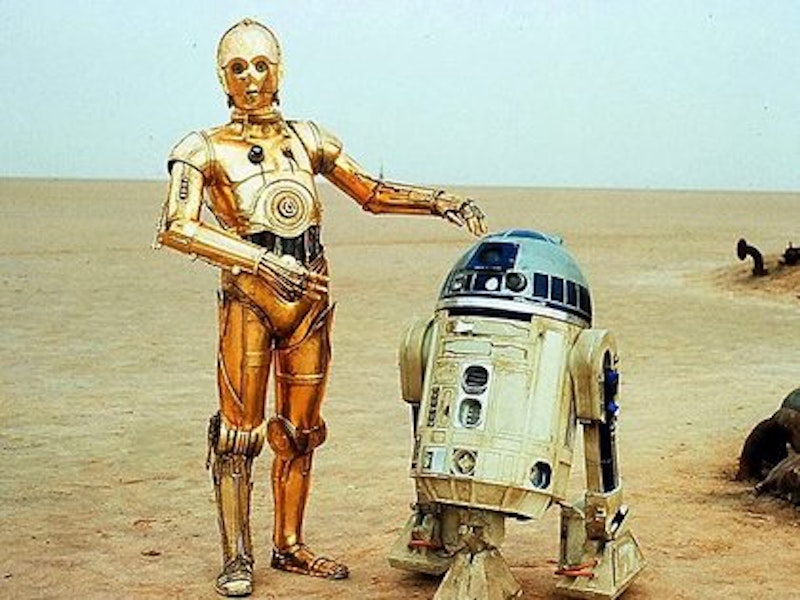 I think this is the kind of idea that always gets shouted down. The idea is mine and personally I think it's good. But even so.

Star Wars has been around 40 years. It's time to spin a franchise off the franchise. A new series of movie releases can come out independently of the first series. Disney can do the continuing adventures and the stuff about the Republic and the Empire—everything that has been Star Wars up to date, with the planets and the X-wings and the Kessel Run. While that's shipping as scheduled, Disney can also do a series of low-budget movies about kids in the California suburbs. That series will be Star Wars too.

The peg for this second Star Wars series: Characters from the real Star Wars pop up in real America, the same America we all live in where everybody knows about Star Wars and who the characters are. We don't have the whole cast showing up, just two or three characters per film, some different props each film. You parcel it out.

The characters who make the jump are the ones who don't need CGI and don't need a famous actor. Costume characters, starting with R2D2 and C3PO. Droids would kick off the series, with C3PO and R2D2 separated. C3PO is looking for R2D2, and the kids in the California suburb help him. An E.T. feel: bicycles at night, white flashlights against dark sky. The kids are all keeping it a secret that R2D2 is there. The hero has a tomboy kind-of girlfriend and she's his best pal.

The next movie could be Light Saber, as in there's a light saber and stormtroopers are coming to get it, and kids in a California suburb have hold of the thing and want to make money off it somehow. Falcon, and this time it's the Millennium Falcon. Some kids figure out how to fly it together, working as a team, and some stormtroopers come looking for it. The kids have to fly the ship cross-country to Han Solo, who's waiting in New York or something. He's a cameo; the big characters can come on as cameos. Yoda in Light Saber (because it's his light saber that's missing) and Han Solo in Falcon. If Harrison Ford isn't up to it, they can use CGI and patch the character in. I mean, I imagine. We're talking a few years ahead, so the technology should be there. If not, Samuel Jackson.

Okay, a joke you have to do for the first one, Droids. People see the robot and think he's one of those costume guys, the cosplay fans. The people are really impressed. They're saying, “And you can do the voice!” Because of course we get Anthony Daniels, and if he's dead then we get Dan Castellaneta or Hank Azaria. Fans won't like it, but by now fans are used to being disgruntled.

The great idea. The Star Wars franchise can step out sideways from itself. It doesn't have to go for a straightforward extension, as when a fresh batch is made of the old mix (Star Trek: The Next Generation, the Star Wars movies from the turn of the century). It doesn't have to reboot, as when old stories are retold in hyped-up form (the new Star Trek movies, Ultimate Marvel). It can walk through a wall, send off an astral projection of itself. Two guys in costumes and you have a Star Wars movie. A prop and some light effects, and you have a Star Wars movie.

That's possible because 40 years have gone by in which we have all hyped each other into a state of Star Wars consciousness. We're saturated. I don't think James Bond or Superman could pull off a sideways series, or the Marvel heroes. You'd need the central characters to appear, and then what would be the point? All right, maybe Superman's cape could do a movie, but that's one movie, not a series. Star Trek, okay. It does have the potential, but I don't think it's as good a bet. It's getting on.

Irony. Personally, I don't like or dislike Star Wars. But when you see potential, you have to say something. Star Wars has a potential that's almost unique. History has placed the ball at our foot, but nobody's going to kick.