Film Review: Filmworker is a Compelling Documentary About Kubrick

Right-hand man Leon Vitali is a fascinating conduit. B+ 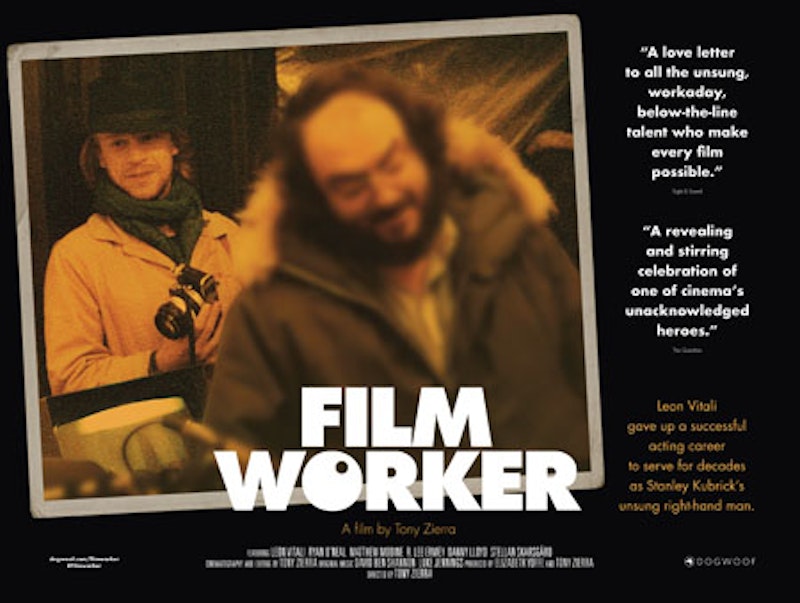 Stanley Kubrick has been dead for nearly 20 years. When the director of 2001: A Space Odyssey, The Shining and Dr. Strangelove was alive, he was reclusive and mysterious, rarely giving interviews and not setting foot in the United States for the last couple of decades of his life.

Filmworker, a new documentary by Tony Zierra, shows us Kubrick through the lens of his right-hand man, Leon Vitali. Vitali, a longtime fan of 2001, had an acting part in 1975’s Barry Lyndon and shortly thereafter became the filmmaker’s assistant and closest collaborator, while mostly giving up his promising acting career. He had many jobs with Kubrick, from clerical work to casting to cutting together of trailers, although most of them didn’t necessarily conform to his on-screen credit. “Filmworker” comes from the occupation that Vitali once listed on a tax form.

He stayed in that role for over 20 years, leading up to a return to the screen as “Red Cloak” in Kubrick’s final movie Eyes Wide Shut, and since Kubrick’s 1999 death has served as a custodian of his boss’ work, including supervising restorations and re-releases.

This fascinating documentary, which debuted at Cannes a year ago and is just reaching theaters now, is likely to appeal to anyone with an appreciation for Kubrick’s movies. It features plenty of clips from the classics, including plentiful behind-the-scenes material, and it makes much better use of footage from The Shining than that sequence in Ready Player One. It’s worth noting that, because of Kubrick’s slow pace in the last couple of decades of his life, the only films he worked on between Barry Lyndon and his death 25 years later were The Shining, Full Metal Jacket and Eyes Wide Shut. There’s not much discussion of Spartacus, Dr. Strangelove or A Clockwork Orange.

The film doesn’t offer much new insight into Kubrick beyond what was already known, nor do we even hear his voice more than a handful of times. But Vitali, now around 70, emerges as a compelling documentary subject on his own, especially as we realize that his relationship with the temperamental Kubrick was often a curse as much as a blessing. It’s a complicated question, of how to view brilliant men who were sometimes terrible to those around them. If nothing else, Filmworker is much more compelling than Eyes Wide Open, the self-aggrandizing memoir that Frederic Raphael, the screenwriter of Eyes Wide Shut, wrote right after Kubrick’s death.

In Filmworker there are other strong talking heads, including Danny Lloyd (who played Danny in The Shining) and the late Full Metal Jacket drill sergeant R. Lee Ermey, who both have Vitali to thank for their roles in those classic films. We also hear from the actor who was passed over for Ermey’s role, who’s still bitter at Vitali, 30 years later.

As for a certain longstanding Kubrick rumor, Filmworker only briefly touches on the conspiracy theories broached in Room 237, a completely nutty but entertaining 2013 documentary in which a bunch of random people shared their fan theories about The Shining. At one point, in a piece of older footage, Vitali is asked, “Was Stanley involved in the Apollo landings?” and he answers simply “No.”