The Silent Power of August at Akiko's 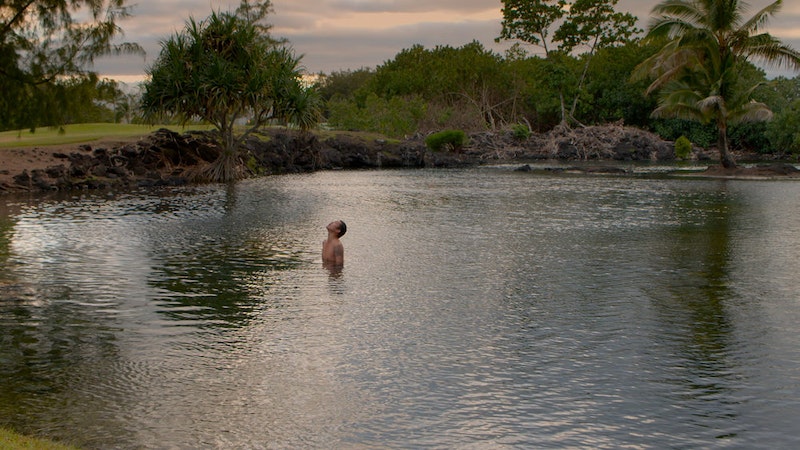 Over the past few weeks, I’ve been fascinated by the kaleidoscopic, primeval violence currently erupting over Hawaii’s Big Island. The slow-moving flows of molten rock swallowing up cars, houses bursting into flame, clouds of white and purple steam billowing off the waves as lava seeps into the Pacific—the destruction serves as a reminder of how infinitesimal we are in the face of ancient, geologic forces. Often lost in our exponential technological progress, we mistakenly believe we’re masters of nature, rather than another part of ecological web.

So starkly different is this destructive Big Island than the rejuvenative Big Island of Christopher Makoto Yogi’s August at Akiko’s. The characters of the film, notably Alex (played by musician Alex Zhang Hungtai) and Akiko (played convincingly by non-actor Akiko Masuda), are still subject to the overwhelming power of nature—although Yogi’s Hawaii focuses on the creative side of the natural cycle that heals and allows life to flourish.

August at Akiko’s is a trance-inducing vision currently making the rounds at film festivals and looking for distribution. The film centers on Alex returning to his homeland of Hawaii as a retreat from his cosmopolitan lifestyle and to visit his grandparents. Upon finding that his grandparents have passed away, he aimlessly wanders the Big Island and befriends elderly Akiko, who helps him commune with his vibrant surroundings and ease into an introspection that heals his melancholy.

Presented as a “love letter to Hawaii” the film’s highlight is the reverent cinematography of Eunsoo Cho. The passive performances (whether deliberate or not) of the actors tend to melt into the background, adding to the ethereal quality of the images. Not unlike a dream, the “plot” of the film isn’t memorable enough to put into a definite sequence, but the poetic staying power of some impressions make for a worthwhile viewing experience.

The film is rife with static shots of still power: steamy and lush rainforests, waves roaring and breaking, the wind whipping through thickets of bamboo. The result of these meditative, natural asides places Alex as a part of the landscape of Hawaii rather than an observer. This grounding, eschewing our typical human centric worldview, and the drifting passage of time brings to mind the cinema of Satyajit Ray, or some of the more meandering passages of Nicolas Roeg’s Walkabout. This healing, deep-thought filmmaking isn’t anything new, but does feel more striking against the backdrop of the current Marvel era.

Fortunately, the sound design saves the audience from falling into a complete stupor and smartly mirrors the Zen meditation practiced in the film on a symbolic level. Just as the cracks of the woodblock bring the practitioner back to her present, so do the prevalent and sudden artificial sounds of humanity bring us out of our contemplation of Hawaii’s beauty. Throughout the film there are constant man-made interruptions: cars sputtering by, the whine of weedwackers and shouts of workers digging up dead tree stumps. The Big Island isn’t a mythical realm for tourists—life goes on.

Yogi has crafted a beautiful visual poem. While the loose narrative and naturalistic performances aren’t remarkable, they fit elegantly with all the other elements of the film centered amidst the silent power of Hawaii’s unique landscape. A great early afternoon, introspection trip, it’s refreshing to see this kind of slow cinema still being made today.