On Mesa of Lost Women (1953), an exploitation classic full of spiders and beautiful women. 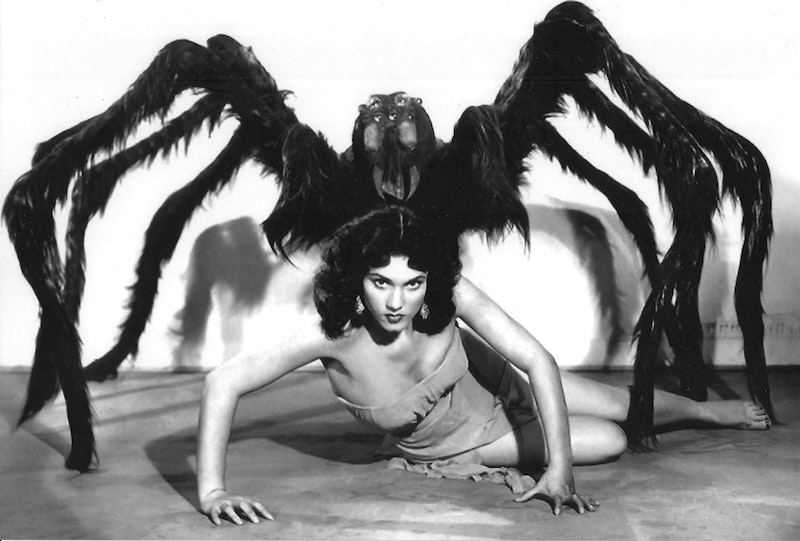 When the term “exploitation film” comes up there isn’t much discussion about what’s exploited. Most of these films adhere to the genre’s formula of gratuitous sex, violence, and anti-social themes. In conventional exploitation films negligent behavior is dramatized in a way that gives viewers a chance to live out fantasies vicariously and reflect on why such fantasies should never be realized. Ron Ormond’s 1953 sci-fi film Mesa of Lost Women twists ideas from the exploitation genre to create an electric rumination on the origins of anti-social behavior.

The movie follows the adventures and misfortunes of a group of people stranded in the Mexican desert after two different emergency plane landings. Near the landing sites, mad scientist Dr. Aranya (played by a barely recognizable/pre-Addams Family Jackie Coogan) kidnaps beautiful women and then knocks them out and injects them with the blood of insects that causes the ladies to transform into big indestructible tarantulas. When the sadistic doctor injects average men with the insect blood it turns them into violent zombie dwarves. One afternoon Dr. Aranya invites his straight-laced ex-colleague Doc Tucker (Allan Nixon) to visit his secret lab located deep inside a huge mesa. The milquetoast scientist is aghast when he discovers Aranya‘s inhumane projects. Tucker declares he’ll report all this to the police, a claim that gets him chased off by Aranya‘s weird menagerie. By the time he reaches the closest town Tucker’s driven insane by this brush with terror. He’s then institutionalized but quickly escapes and becomes a Bible-quoting psychopath who takes the stranded passengers hostage. Tucker brings his captives to Dr. Aranya‘s hideout where chaos erupts.

A lot of other ridiculous things happen, some of which have to do with the plot, and others that come out of nowhere. There’s the moment when statuesque were-spider Tarantella (Tandra Quinn) wanders out to a local cantina where she shakes and shimmies in an exotic dance routine set to an avant-garde flamenco score (which plays incessantly in the background throughout the entire film). Freshly escaped maniac Doc Tucker shows up and shoots Tarantella in the middle of the spectacle. She collapses, but immediately returns to life causing cantina patrons to scatter in fear.

There are several disorienting scenes with barely any lighting. These depict the spider girls and the zombie dwarves forming a mob. Gleaming eyes cut through the murk as hostages wander through a dense wilderness straight into the clutches of the monsters. Moody scenes like this are book-ended by high action and unintentionally silly moments of overacting, yet nothing ever feels disjointed. An ambitious conceptual art collage combining surrealism, exploitation tropes, and film noir, Mesa is director Ron Ormond’s most unique creation. This pastiche approach is a hallmark in several of his other films: The Exotic Ones (a picture that went by the alternate title The Monster and the Stripper and starred Arkansas rockabilly singer Sleepy LaBeef), “Christploitation” horror flick The Grim Reaper, and a series of subversive westerns starring the whip wielding/gun-less hero-in-black Lash Larue.

Mesa of Lost Women illuminates the relationship between the illogical and the perverse. Threadbare characterization and a deluge of unexplained plot points reflect the absence of common sense that its antagonists possess. The same themes that make this movie compelling also gave life to the music of Charles Manson, the writing of Valerie Solanas, and the paintings of Paul Gauguin. Ron Ormond never committed any unspeakable act, but his work exorcises a spirit of the unspeakable. Mesa of Lost Women is one of the greatest exploitation films because it panders to the lowest common denominator while never letting its audience forget that danger reigns when logic is powerless.