Same as It Ever Was 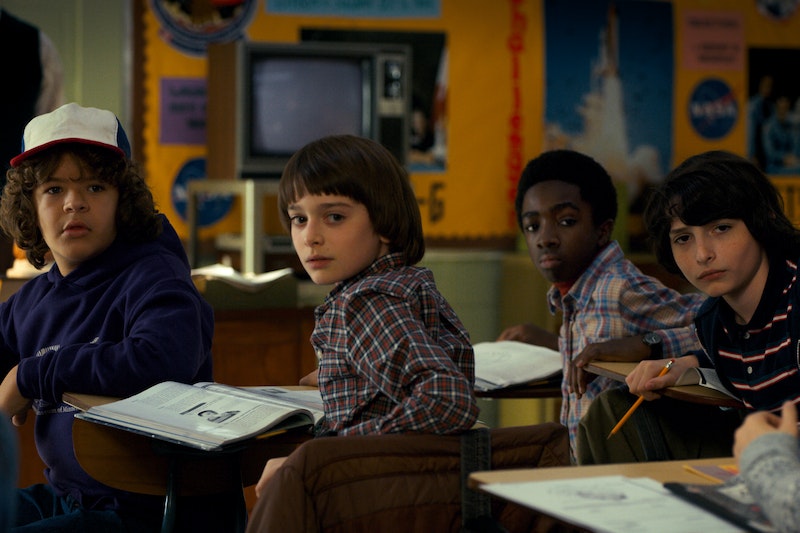 Watching the second season of Stranger Things was, for me, much like watching the first. I was charmed by the beauty of the imagery. I was amused by the way the 1980s was recalled not just in soundtrack or visual design choices but in the story structures. I was engaged by the way the different plot strands came together. And if you were to ask me what the point of it all was, I’d admit I had no real idea.

It’s possible to project any number of themes on to either or both seasons of the show. But watching the second season in particular, I was struck by how little the show itself insisted on any particular reading. Binging season two became an exercise in trying to answer what should be a simple question: what’s this thing about?

On one level, that’s a simple question to answer. It’s about a bunch of tween friends in a small town in the 1980s who survived a weird and frightening experience in season one finding out that the horrors they lived through are still present in their lives. It’s about one of them, young Will Byers (Noah Schnapp), finding that the mysterious other realm dubbed “the Upside Down” is still tied to him. It’s about another, the girl named Eleven (Millie Bobby Brown), learning about her past. It’s about Sheriff Jim Hopper (David Harbour) investigating mysterious happenings in their small town of Hawkins, Indiana, and finding connections to the sinister mysteries of the Hawkins National Laboratory. It’s about Will’s mother Joyce (Winona Ryder) trying to look out for her son with the help of her new beau Bob (Sean Astin) and of Doctor Sam Owens (Paul Reiser) of the HNL—while wondering if she can trust Owens. It’s about a new girl, Max Mayfield (Sadie Sink) trying to join the party of boys from season one while their leader Mike (Finn Wolfhard) mourns the missing Eleven. It’s about the douchey Steve Harrington (Joe Keery) pulled further into the weirdness and learning to be a better person. It’s about Mike’s sister Nancy (Natalia Dyer), nominally still Steve’s girlfriend, being drawn more and more to Will’s brother Jonathan (Charlie Heaton). And it’s about Mike and Will’s friend Dustin (Gaten Matarazzo) finding a new pet while competing with his buddy Lucas (Caleb McLaughlin) to spend time with Max.

That’s a lot of story, and not all those threads connect directly, either in plot or theme. Nancy and Jonathan’s romance, in particular, never feels especially relevant or interesting. The sheer amount of matter means that the show moves at a leisurely pace, for better or worse. Everything gets the right amount of screen time, all the subplots develop within a well-planned structure, but as a whole the show’s oddly slow. You know all the strands are going to lead back to the Hawkins National Laboratory, but there’s enough stuff happening to enough characters that it takes a while for any one strand to move along. The weirdness and the horror grow diffuse, lost among golden-toned establishing shots and a small-town autumn.

The show’s efficient in some ways, setting up a new mystery and then reintroducing the cast of the first season before the 10-minute mark of the first episode. Which makes some of the decisions odder; Max’s mother and stepfather are hardly present, for example, so it seems for much of the season as though she’s raised by her stepbrother (Dacre Montgomery). The climactic episode, as another example, feels like an extended episode of checking off boxes—this has to happen, and then this has to happen, so that that can happen, and everybody can go home having contributed something to the resolution.

The dialogue’s neither smart nor stupid, moving the story along without being especially interesting as language in its own right. Here the show’s fine with using clear signposts, letting the viewers know who’s good and who’s bad and foreshadowing plot twists as needed. This isn’t necessarily as dull as it sounds; while not surprising, it means the storytelling’s always easily understandable. In this as in so much else, the things the first season did well are done well in the second season: the visuals carry the show, with excellent compositions, dreamy pans, a rich color palette.

That’s important because the story’s not as weird as it looks. Everything tracks back to the HNL, without the variety of Twin Peaks or even Northern Exposure. The visual level provides the weirdness the story lacks, though, whether in the dark imagery of the Upside Down, or Joyce remaking her house with Christmas tree lights (last season) and crayon drawings (this season). Or, most powerfully, in Hawkins townscapes almost swallowed up by the autumnal forest all around the small town. The deep woods, at night or in daytime, have an atmosphere. The visual sense of mysteries in nature resonates with the other dimensions the show tentatively explores; it’s a piece of the puzzle, perhaps the specific piece that makes the whole feel greater than its parts.

Which is good, because in other ways the show’s miserly with its weirdness. We learn little about the Upside Down, and what we come to know of the place or its inhabitants is mostly speculation. The focus is on this world, the mix of domesticity and genre sublimity tilted toward the former. It works well enough for the story, but I found myself doubting that people who saw the things these characters had seen would be as untouched as they are—notwithstanding the show acknowledging the reality of PTSD.

But this may be the point of the show: the domesticity. The community of Hawkins, visually swallowed by the wild wood. The bonds of family and friends, as relationships end and begin and are tested against each other. Hawkins is in many ways a traditional community, America the way its dominant culture liked to imagine it. People of diverse backgrounds are in there, to a point, but the issues specific to those backgrounds don’t come up. Set in 1984, the second season shows us a house with a Reagan/Bush lawn sign, shows us another with a Mondale/Ferraro sign, and shows us people from both households as fast friends.

Which is to say that in the second season as in the first, the series is obtrusively set in a nostalgia-tinted '80s. That shapes the story. It’s not just the way the absence of the Internet affects the way the characters research mysteries, or the way walkie-talkies substitute for cell phones. It’s not even the props and fashions. It’s the influence from the stories of the '80s, King and Spielberg and Joe Dante: Eleven is given three rules she must follow, and you’re only surprised that they don’t include “Don’t feed them after midnight.”

It’s not total mimicry. The sinister government base, such a staple villain of the '80s, here has a slightly different feel. If movies in the '80s could still present the American military as an object of suspicion (see, for example, WarGames), here there’s a sense more like a precursor to The X-Files: undercover civilian super-science, the Deep State at work. And yet things play out much the way they might have in the '80s. One sub-plot sees Eleven spend an episode in Chicago, where she befriends a badly-written post-punk gang, with unlikely clothes and hairdos. Their hideout’s decorated with graffiti nodding to Grant Morrison’s comic The Invisibles—King Mob, Barbelith, O’Bedlam scrawled next to each other—which didn’t start publishing until 1994, but the plot of the episode’s pure mainstream '80s TV: Eleven’s drawn to them, but realizes the value of her original friends. The novel-for-television form didn’t really exist in the '80s, but both the plot structure and the character work would be easily assimilated by any viewer of three decades past.

Stranger Things is a TV show that does what it wants to do perfectly well. I could wish it had a bit more on its mind, but it tells a story neatly if not surprisingly. And if the show is ultimately about friendship and family and community, it’s dealing with themes that would be celebrated in the television and movies of the '80s. In that sense the form and content work off each other. But there’s a big difference between pastiche, however well-crafted, and original work: the stories to which Stranger Things pays such assiduous homage were not themselves works of homage. They were doing new things. Not radical things, maybe, but certainly not taking their cues from the movies of the '50s. In that sense the show’s lesser than its originals: specifically, less weird.