They Shall Not Grow Old, Peter Jackson’s World War I documentary, is jarringly light-hearted and superficial. D 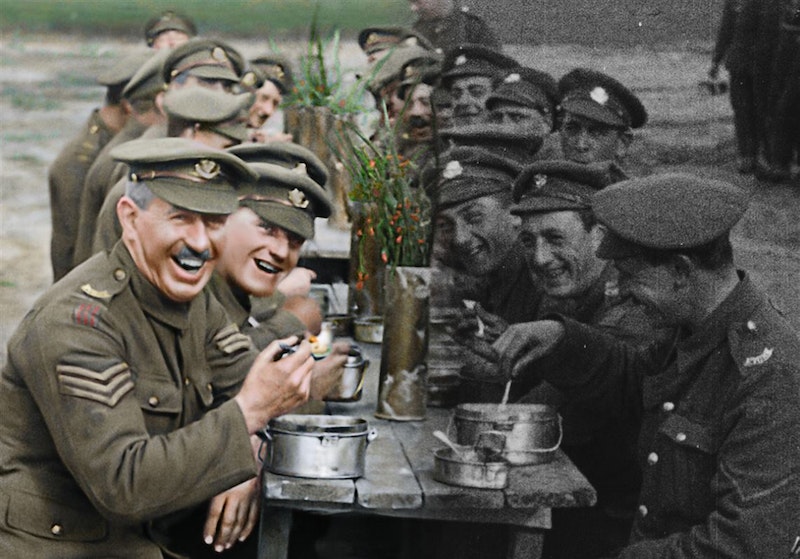 Peter Jackson’s new World War I documentary, a montage of restored and colorized archival footage, is a surprisingly upsetting and often disgusting celebration of the ritual of war. Over the footage (immaculately restored), we hear dozens of British WWI veterans talk about their experience, from the breakout of conflict to the anti-climactic end in 1918. The audio, presumably recorded decades ago, is stoic and proper, and they recall their wide-eyed youth and enthusiasm in enlisting with such alacrity that the overall effect is disturbing more than heart-warming or even melancholy.

There’s no discussion of “shell shock” and Jackson avoids plunging into the horrors of trench warfare in favor of footage of improvised latrines and jokes about soldiers falling over into waist-high sewage. This is presented with alarming credulity, implicitly endorsing the view that these were simply men of stronger stock doing their duty. The futility of it all is shoved into a brief coda, but by that point we’re too deep in the light-hearted la-la-land of men remembering their boyhoods spent killing and watching their friends die every day.

The only revelation in They Shall Not Grow Old is how poorly Britain treated its veterans once they returned home: businesses posted signs reading “Veterans Need Not Apply,” a sentiment borne not out of malice or indifference but practicality. In their eyes, these men had no skills, despite surviving trench warfare and unbelievably insane living conditions for years. Those that weren’t killed, maimed, or driven insane by PTSD were told they weren’t wanted. This is explained by the civilian’s distance from the actual combat: as opposed to France, Germany, and Belgium, the war never reached British soil, and without television, much less proper frontline reporting, the war was out of sight, out of mind for most people, as our wars in the Middle East are viewed today in America.

The pointlessness of the war isn’t discussed until the final 20 minutes of the movie. Up until then, we watch soldiers enlist, train, march, eat, shit, fight, and wait to die. All of this is narrated with matter of fact if not fond asides about feeling “accomplished… like you did something good.” Much is made about their age in the beginning: soldiers younger than 19 were encouraged to lie about their age and did so with enthusiasm. The hangover of the war is well known at this point, but even so, when it’s elided in favor of a light-hearted travelogue of a typical soldier’s day, the film veers into broad propaganda about the bonding aspect of war.

The restored footage is often grotesque, resembling Bruegel or Bosch in its muddy, bloody horror. These men had a job to do, and a country to serve, but They Shall Not Grow Old takes all of this at face value instead of juxtaposing the soldiers’ naiveté against the titanic horror of the enterprise. Their sentiments and views towards war and “supporting the country” are so far removed from where we are as a country today that the film comes off as gross and misguided.