Titans is entertaining, almost despite itself. 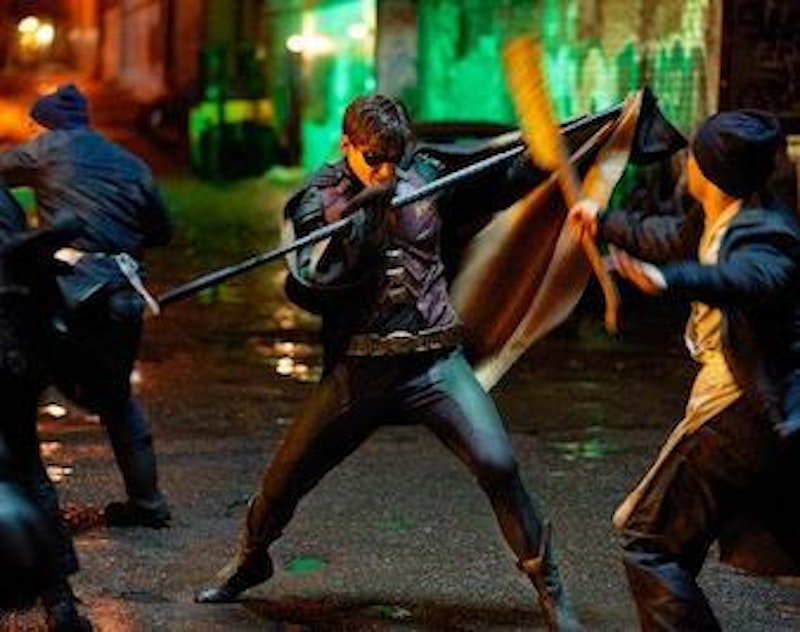 One of the oddities in how mega corporations exploit their intellectual properties today is the way different versions of characters are packaged for different audiences. Take, for example, the Teen Titans, who are owned by DC Comics, a subsidiary of DC Entertainment, a subsidiary of Warner Bros. Entertainment. Teen Titans GO! is an adorable high-energy cartoon for kids. The same characters recently debuted in a live-action TV series, Titans, emphatically for adults and older teens.

Titans drew the ire of fans even before it aired, when a trailer showed Dick Grayson (Brenton Thwaites), the former Robin, declaring “Fuck Batman.” The line gains in poignancy when you consider that one of the co-writers for that episode was Akiva Goldsman, writer of Batman Forever and Batman & Robin. One imagines he’s had that chip on his shoulder for a while.

The show was created and developed by Goldsman, Geoff Johns, and Greg Berlanti. Johns is a star DC Comics writer and Chief Creative Officer of DC Entertainment; he’s written for a number of DC’s film and TV projects, contributing the story for Aquaman and the upcoming Wonder Woman sequel as well as helping develop the Flash TV show. That show’s part of the “Arrowverse” of shows (Arrow, The Flash, Legends of Tomorrow, and Supergirl) developed and produced by Berlanti. Titans isn’t officially part of that group, but it could be. As writers, Goldsman, Johns, and Berlanti are responsible in whole or in part for five of the season’s 11 episodes; Marisha Mukerjee, Richard Hatem, Gabrielle Stanton, and showrunner Greg Walker account for most of the rest.

Titans was developed for DC’s new streaming service, DC Universe (as DC didn’t make that service accessible outside the United States, I watched Titans courtesy of Netflix Canada). It’s self-consciously dark, in that the heroes beat up child molesters and fear the evil inside them and kill people. It’s a stylized darkness, though, one ultimately not supported by the character choices or even by the show’s basic plot structures.

The story opens with young teen Rachel Roth (Teagan Croft, one of the strongest performers on the show) manifesting strange powers, an inheritance from her mysterious father. This leads to her mother’s assassination and Rachel’s flight to Detroit, where Dick Grayson’s a newly-transferred police detective who struggles with his violent tendencies. The two characters come together, but meanwhile in Austria an amnesiac named Kory Anders (Anna Diop) wakes up with powers of her own. After she comes to America and joins up with Dick and Rachel, they all encounter a young man named Gar Logan (Ryan Potter) who can turn into a green tiger. All the while, they’re hunted by assassins working for Rachel’s father.

Adventures occur, but the 11-episode season doesn’t end with a proper climax. It’s more of a semi-cliffhanger that feels like a mid-season pause. Walker’s said that the original finale was reworked into the first episode of season 2 once the show was renewed, and you can feel the lack of resolution. Apart from anything else, episodes 9 and 11 are respectively a flashback and a quasi-flashforward; the narrative, which had been moving forward at a good pace, stalls.

It’s an odd choice, as up to this point the show avoids the tendency of so many streaming series to feel slow. The pacing’s sharp, and things constantly happen, mostly to do with the plot. That overall story’s slow, but most digressions are eventful in themselves and visibly move elements into place. Coincidence shapes the plot more than it should—Gar Logan meets the others by chance, for example—and the nature of Raven’s father is kept secret for longer than it should’ve been. Clichés are common; of course the two youngest kids run off and get themselves in trouble. But the overall mystery’s strong enough to give the season a solid focus.

Thematically, the show’s a bit rougher. There’s a consistent interest in what it means to struggle with the darkness in one’s soul, and how characters deal with their own propensity for violence. Unfortunately, the show’s not smart or wise enough to say anything interesting or even particularly coherent. Dick Grayson’s unnerved by his increasing eagerness to inflict pain, but says nothing when his teammates kill people. No one, in fact, says anything. The theme feels bolted on to a superhero story as a way to give it unearned gravitas.

The characterization’s not strong enough to support the thematic interest in darkness, either. Characters enter into scenes and don’t say or ask things they logically ought to, in order that the plot can work out the way the writers want. Chemistry between actors is variable at best. Grayson and Anders start a sexual relationship with no obvious set-up, textually or subtextually—dialogue doesn’t establish an attraction and the actors don’t play it. Diop’s character generally comes off as a plot device; I don’t envy her task of having to find a through-line in the part she’s been given.

None of this is necessarily fatal. Superhero characterization comes through fights and use of powers as much as (or more than) dialogue and sex scenes and the usual elements of character-building. And Titans is at its best in its fight scenes. They’re well-executed and well-shot, inventive and fast and clear. They’re positioned at the right points of the episodes, too, making them key parts of the story. And there’s a lot of them. If you come to the series looking for superhero action, you won’t feel cheated.

Odd, then, that the show at first tries to position itself as a mystery-horror story. The first episode in particular suggests a more intriguing show than we end up with, and makes a convincing argument that you could hang a surreal, nightmarish series around the backstory of Raven, aka Rachel Roth. But the more the series goes along the more it becomes a standard superhero story, perhaps a bit darker than Berlanti’s Arrowverse shows; closer to Gotham, the show that imagines a Gotham City before Batman began to clean it up.

Visually, the show’s shot like a superhero story and not a horror story. It’s dark, there are shadows, but nothing’s obscure. Action happens clearly, and everything’s visible. We’re shown what’s significant, not left to imagine it.

The shapes of the episodes fit typical superhero patterns. There’s the episode where the heroes get captured by the bad guys and locked up in personalized cells until one of them escapes and frees the others. There’s the training sequence where the characters show off their powers to each other and learn to work as a team. There’s the flashback origin story. There’s the team of potential allies with a sinister leader—in this case, the Doom Patrol, who will get their own spin-off show but who here are left behind by the Titans for no immediately obvious reason.

That last also reminds us that this show takes place in a superhero universe. Characters aren’t shocked to find one of their allies is an alien. Why should they be? They’ve worked alongside a man from Krypton. This is a world in which a mansion can hide a small family of super-science freaks. If the nature of this fantasy world becomes clearer as the show goes on, it also blows away the early feel of a grounded, mystery-oriented story.

Titans is entertaining, almost despite itself. Its visual style is heavily influenced by the Marvel Netflix shows, and its storytelling approach starts off looking like something in the same vein: street-level heroes at the edges of a vaster conspiracy. But in short order we find out that’s not really what this show is at all. It’s a big brawling superhero story with a muted color palette. There’s nothing wrong with that, and in fact the superhero elements are the best part of the show. There are hints that it could’ve been a better, stranger story; but if we never quite get that series, what we do get is pleasant enough in a grim-and-gritty vein.