The desert is the main character in The Beast of the Yucca Flats. 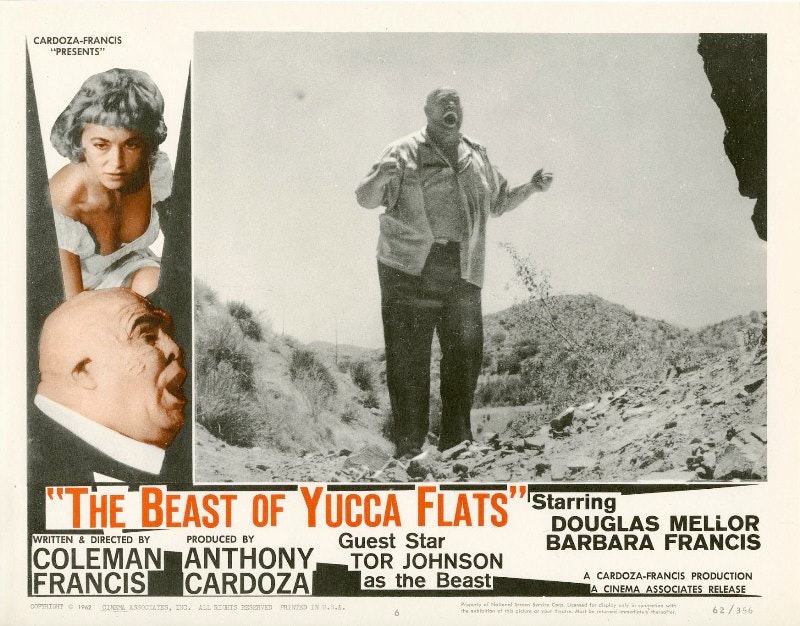 The moody 1961 film The Beast of the Yucca Flats has found a cult following among devotees of z-grade sci-fi/horror films due to its director/co-star Coleman Francis' connection to Ed Wood (the so-called worst movie director of all time). Beast of the Yucca Flats was Francis' directorial debut, but it's not a so-bad-it's-funny camp classic like Wood's work, and it's not a traditional horror/sci-fi film either. It does feature scenes of violence and a plot that has elements of speculative fiction, but plot elements aren't always the defining factor in determining a film's genre.

The essence of Beast of the Yucca Flats is its desert location. There's not a single cowboy, horse, or covered wagon in it, yet the film is a tale of the untamed West, albeit one updated for the atomic age. Like any great traditional Western film, throughout Beast we see America's desert wilderness depicted as an organic manipulative power dwarfing all else in its presence. The desert is the main character.

The plot: Indie horror stalwart/Swedish pro-wrestler Tor Johnson plays Joseph Jaworksy, a Russian scientist who defects to America during the Cold War. KGB agents track him down to his new base of operations at an atomic test site in the southwest where they attempt to assassinate Jaworksy and steal his briefcase, filled with Russian military secrets. While fleeing from the agents, Jaworksy accidentally runs out into an active test range just as a bomb drops. To quote the film's otherworldy voiceover, "Joseph Jaworsky—noted scientist... Press a button. Things happen. A scientist becomes a beast". The a-bomb blast mutates Jaworsky's body and brain, causing him to begin stomping around the desert killing anyone who comes into view. The lives of several random bystanders and police officers are entwined as the mutant's bloody mania intensifies.

Coleman Francis' unrelenting desolate vision pushes this already threadbare plot to the brink of non-existence. Many scenes unfold as long shots. An especially panoramic scene highlighted by aerial cinematography shows police in a small plane zooming through the desert pursuing a man suspected of being responsible for the Jaworksy murders. The suspect scurries through dangerous boulder-lined gullies and across vast plains of sand and sagebrush. A cop shoots him several times. The gunshot victim stumbles frantically, is shown wearing bloody clothes in one scene and then with spotless clothes in the next, but never dies.

This film has almost no dialogue. Its audio consists mainly of sound effects and offscreen narration provided by Francis, whose script sounds more like free association prose than The Twilight Zone or Tales From The Crypt. The few times when actors speak they're shown with their backs to the camera—another genius move that emphasizes the dehumanizing conditions of the desert as it becomes Jaworsky's own private killing field. Logic and character development are distorted dramatically when the only things that matter are life and death.

Despite the grim situations presented, there are very few scenes in the film where anything seems scary, and its violent parts aren't gory or explicit. Instead of horror, Beast portrays an ambient chaos that thrives comfortably among the desert's sprawling plains, jackrabbits, hot winds, and tumbleweeds.

Though it's hard to tell whether or not the film's more adventurous concepts are by-products of Coleman Francis' inexperience, one thing’s for sure: The Beast of the Yucca Flats is a quietly passionate film that stands in a class all its own as an eccentric Cold War western filled with abstract symbolism.