Yet another story of an American criminal disenchanted in Mexico. C- 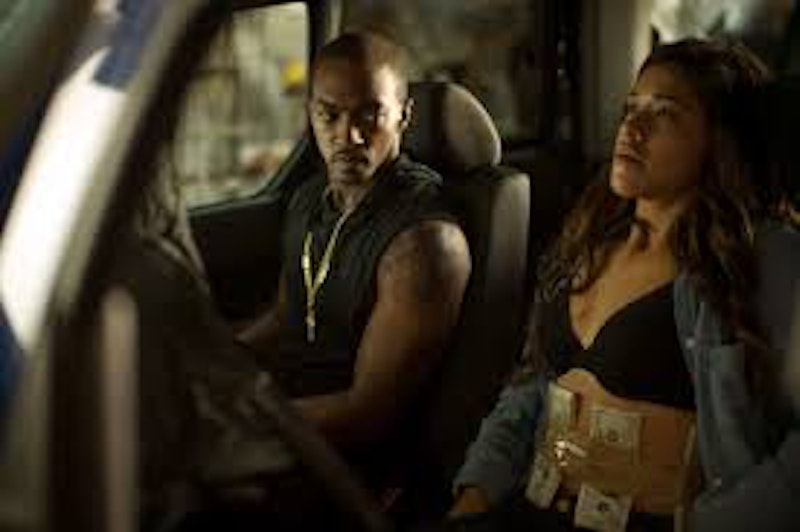 Even if it weren't a remake of the 2011 Mexican film of the same name, Miss Bala would go down as derivative. It's yet another story of an American with no experience as a criminal going down to Mexico, battling toe-to-toe with dangerous, murderous drug dealers, and coming out on top.

The new film, directed by Twilight's Catherine Hardwicke, has a compelling lead performance by Gina Rodriguez, that can't overcome a trite plot, and some of the most incompetently staged action sequences in memory.

Rodriguez stars as Gloria, a makeup artist who visits a friend in Tijuana to help prepare her for a beauty pageant. But after the friend’s kidnapped, she finds herself in the middle of a drug cartel war, and captive of Lino (Ismael Cruz Córdova), so she must use her smarts and wiles to find her way out of an impossible predicament.

Miss Bala turns into The Firm briefly, with Gloria caught between criminals on one end and federal agents on the other, and she can't trust either side. But that angle is abandoned so quickly that it's head-scratching why it was included at all. And the film's cynicism about government institutions is undercut by its twist ending.

I’ve seen countless movies and TV shows in the last decade with that premise of a novice squaring off against south-of-the-border drug dealers. The best was probably Breaking Bad, while the worst was Snatched, that stupid comedy from a couple of years back with Amy Schumer and Goldie Hawn on vacation together.

The idea of a civilian outsmarting and outgunning dangerous drug lords has a certain underdog appeal, I suppose, although the premise usually requires the drug dealers to behave like bumbling idiots. The genre is often racist, although it least this time the heroine isn't white.

Still, there's not much original about the plot, which consists of a lot of material that seems left over from the Sicario movies; I hope Trump doesn't start quoting plot points from this movie in order to argue for a border wall. The other big weakness? Incompetently shot action sequences, including an early one in which the camera is pointing at the characters' feet for much of it, and a later one that's almost entirely close-ups. In neither scene do the filmmakers come close to conveying any sort of spatial awareness.

Rodriguez, best known for Jane the Virgin, is fine in the lead role, although it's not quite up to the par of her astonishing turn in Annihilation a year ago. Still, she's the only character in the film who even registers. It's also noticeable that the camera leers after Rodriguez, including lots of close-ups of her legs and ass. Every time she takes a shower, the movie includes it. With the border in the news these days, I'd like to see some innovation and creativity in this genre of movie, rather than the same warmed-over plots.