LEGO Movie: The Second Part operates at about 75 percent capacity. B 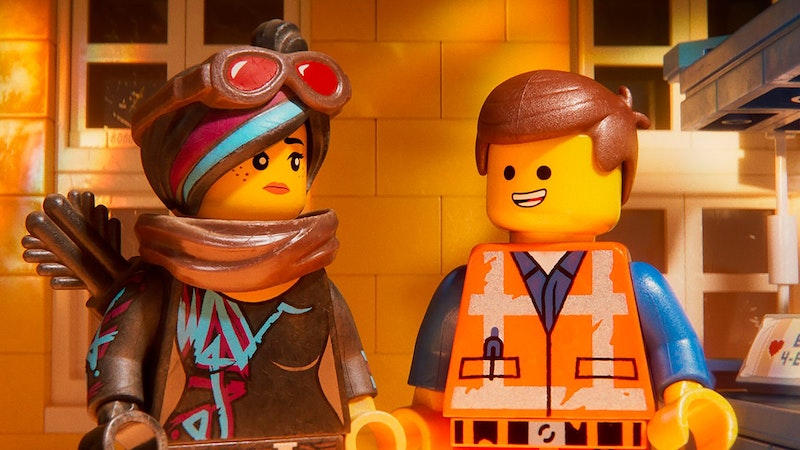 The LEGO Movie, when it arrived five years ago, was one of the biggest cinematic surprises of the decade. What looked at first like a crass corporate branding cash-in was in fact a creative triumph, equal parts hilarious and moving, and a perfect distillation of the sensibility of writer/directors Phil Lord and Chris Miller.

Now, after two spinoff movies, we have the proper sequel, The LEGO Movie 2: The Second Part. While the film has some of the inventiveness and wordplay familiar from the original, it's missing the element of surprise of the first film. In everything from writing to humor to songs, the sequel is operating at about 75 percent capacity.

This film was written by Lord and Miller, although the director is Mike Mitchell, the man behind such cinematic touchstones as the fourth Shrek and Deuce Bigalow: Male Gigolo. Lord and Miller were also involved, as producers, in last year's best animated film, Spider-man: Into the Spider-verse.

The sequel re-introduces us to construction worker LEGO Emmet (voiced by Chris Pratt), along with his female counterpart Wyldstyle (Elizabeth Banks). As hinted in the first film's ending, the original characters are now doing battle with a group of Diplo-toy aliens, led by a queen character (voiced by Tiffany Haddish) who can morph into different shapes in a way that recalls Meatwad from Aqua Teen Hunger Force. Also new to the film is "Rex Dangervest," an Indiana Jones-like adventurer character who's also voiced by Pratt.

Beyond a pointless, non-speaking cameo by a Ruth Bader Ginsburg LEGO, the film offers a huge voice cast of big names, including much of the Bojack Horseman cast. And speaking of Bojack, Will Arnett's Batman parody remains one of the best things about these films, and the character even justified a whole spinoff movie that was better than the vast majority of the same studio's live-action Batman pictures. This time, however, the screenplay lays on the Batman in-jokes a bit too thick.

There are also once again original songs, although nothing up to the standard of the first movie’s Oscar-nominated "Everything Is Awesome.” There’s a pretty clever closing-credits song that knows it's a closing credits song, in the tradition of the old It's Garry Shandling's Show theme music. There's also a fine score by a returning Mark Mothersbaugh, whose Wes Anderson collaborations are very much missed.

Plot-wise, the second LEGO Movie is structured much like the first, as it's set entirely within a universe in which all of the characters are LEGOs, who are played with by the members of a single suburban family.

This time, rather than the brilliant reveal that was the first movie’s best moment, the struggle between Finn and his sister Bianca (The Florida Project's Brooklynn Prince), is interspersed throughout. Maya Rudolph shows up as their mom, although I don't think Will Ferrell even appears on camera, although he's heard yelling from another room a few times.

The other disappointment is that it gives the LEGOs new powers of sentience that don't make a lot of sense within the world of the film. There have been a lot of movies in recent years, including Ralph Breaks The Internet (good) and Ready Player One (bad), that have featured characters in a fantasy realm interacting with various intellectual property, but the first LEGO Movie was the best of them by far. This new movie isn’t on the level of the first.