Rock of Ages is All About Moist Panties

Rock out with your 80s cock out 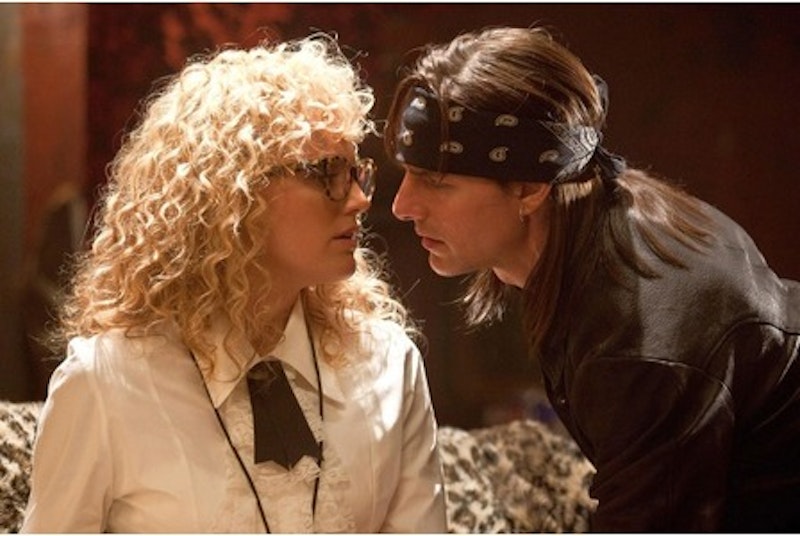 Spoiler alert: If you’re the kind of person who gets cranky when movie reviewers talk about plot points, you might want to skip this review. It should be noted, however, that the plot could have been written by a fourth grader, and is not why you’d go to see this movie anyway. So pipe down, douche.

Before I begin this movie review, it’s only fair to tell you my two main massive hang-ups and preconceived notions going in.

1. I am a huge Broadway junkie: the kind of girl who, if “Wicked” (God help us) becomes a movie, would need several versions of thesauruses (thesauri!) in order to describe how awful it was compared to the magic of the stage version. Read: theater geek. Fortunately for the new film Rock of Ages, directed by Adam Shankman (Glee, Hairspray) I have not yet seen its stage version (though seeing the movie has definitely made me want to see the musical).

2. I. Am. From. The. 80s. Rock of Ages takes place in 1987, which happens to be the year I graduated from high school. This means I am going to be hypercritical of hair, makeup, costumes, pop culture, and pretty much anything 80s. I cannot describe accurately to you how much of a fan of Def Leppard and Bon Jovi I was, am, and always will be. (Hipsters, please note: in the 80s, it was completely acceptable to have terrible taste in music.) Now then. Having terrible taste in music is the perfect segue into this movie review. Above is a photo I took two years ago of Def Leppard lead singer Joe Elliott (yes, that’s the band’s infamous one-armed drummer Rick Allen in the background). It’s blurry because I was nearly fainting that he was that close to me singing “Pour Some Sugar on Me.”

I swooned. In an Atlantic City casino, more than 20 years after the song came out, I still had a physical reaction to hearing this song live. When he sang the line “I’m hot, sticky sweet/From my head, to my feet” I actually (this is probably too much information) had moist panties. Sorry for that.

And that’s what Rock of Ages is all about. Tom Cruise plays the fictional Stacey Jaxx, an aging rocker reminiscent of a blend between several big hair band 80s lead singers, but possibly the most similar in appearance to Axl Rose of Guns N Roses. Featured covered bands include Def Leppard (Lead singer Joe Elliott gave a bunch of interviews about the movie this week—I like the Vanity Fair one), Bon Jovi, Journey, Poison, Pat Benatar, Whitesnake and for some reason, too much Foreigner.

I went into the movie with some hesitation—I mean, no way is Jerry Maguire going to give me the same emotional (okay, physical) reaction to my fave 80s anthem “Sugar,” so it’s only a matter of how bad a karaoke show this is going to be, correct?

Well, surprisingly, not really. Cruise actually works it out. His open to “Pour Some Sugar on Me” (I’m not obsessed. I’m not obsessed) is hot—he does like a funky masturbation thing with light and shaken-up bottles and yeah, he looks good. He sounds good. Throughout the film, he’s funny, brooding, egomaniacal (pointing to head: “I know me better than anyone because I live in here.”), vulnerable… even a bit romantic with the Rolling Stone reporter. Even though he just turned 50 in real life, Tom Cruise is just right for this. It worked. My panties remained dry, but I really, really enjoyed his performance.

Reasons Not to See This Movie:

1. At its worst, it’s an extended version of Glee. (And also? Though all the hair/makeup/costuming was great—I think the less-than-brilliant script could’ve used some more fun pop 80s references; they were too busy singing most of the time for dialogue).

2. Country singer Julianne Hough is not right for the lead. Naïve blonde ingénue? Check. Transformation into true 80s rocker? No. Her voice is a like a female Alvin, from the Chipmunks. I’m not sure why they chose a high-pitched country singer. I think I got a cavity listening to one of her songs, and she didn’t even dance her own stripper pole scenes. LAME! If Tom Cruise could learn to sing in four months, she could’ve taken a pole class. And maybe a few acting lessons (Even her lines: “When my hamster died, your music really helped me” are awful).

3.) The plot. It’s predictable and horrible. We get that the choreography is important, but come on, people like actual scripts in movies too.

5.) Some of the supporting cast isn’t amazing. Mary J. Blige is one-dimensional and boring as the strip club owner, and Catherine Zeta-Jones has had so much Botox that she looks like the Madame Tussaud’s wax version of herself- a shame, because her character would’ve been great with facial expressions. Her choreography is just as stiff as it was back in Chicago.

Reasons to See This Movie:

1.) At its best, it’s an extended version of Glee.

2.) In stark contrast to the lack-ting of Hough, Diego Boneta is adorable as the lead guy. He’s a great singer (he rocks Journey’s “Don’t Stop Believin’” even though we are supposed to believe he wrote it for the chipmunk) and his story is one of the most stable plot lines. He’s fun.

3.) If you are the type of person who enjoys it when movies have the whole “guy meets girl, guy almost loses girl because he thinks she slept with Tom Cruise, guy gets girl back, they save the music place together and all sing Journey at the end” thing, you’ll love this movie.

4.) The music. If you love the 80s, and can sing along to “Sister Christian” and “Wanted Dead or Alive” and “I Love Rock n Roll”? Go. Rock out with your 80s cock out. It’s a blast. I danced in my seat the whole time, fighting an urge to go to the back of the theater, let down my still-big-80s-Jersey-Girl-hair, and flip my neck around while holding a lighter.

5.) Some of the supporting cast is AMAZING. Paul Giamatti (love. him.) is fab as Jaxx’s manager. Alec Baldwin and Russell Brand are freaking fantastic as the LA rock and roll club owner and his partner. Gay spoiler alert: if you don’t like homoerotic mockery, you may not enjoy the absolutely hysterical musical number “Can’t Fight This Feeling” that Baldwin and Brand perform, but I hope you do like it. I had tears in my eyes. The entire movie is worth seeing just for that one scene. Carousel horses and cotton candy? Seriously! Awesome. Nicely done by Pete Schweddy and Arthur.