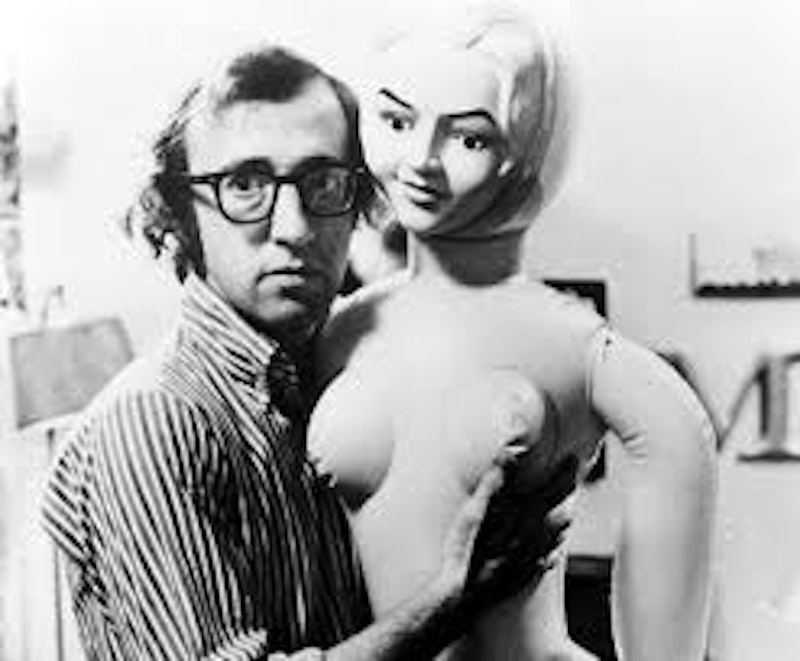 Woody Allen is a tough little fucker. Let’s say you make it from working-class Brooklyn to high-level show biz to a half-century career as a filmmaker, during which you make only those films that you choose to make. Then you’re a tough guy who knows how to get his way. People recognize that Steven Spielberg and Martin Scorsese, two nerdy types who hit it big, would at least scream on the set back when they were young and not much listened to. But Allen is presumed to be a nice little fellow. It’s all those years of screen time that he spent stammering and gulping.

Newsweek has given us the latest in a decades-long parade of Woody Allen news magazine profiles. This one is like all the others. After all, the point of a news magazine profile isn’t to be different. But bits of unprocessed reality do creep in. “Allen in person is nothing like the nebbishy mess of phobias and insecurities he has been impersonating, on stage and screen, for half a century,” the article says. This is at least a start. Actually, the phobias and insecurities are authentic enough. (“I don’t like to go into elevators,” Allen confided a few years back. “I don’t go through tunnels. I like the drain in the shower to be in the corner and not in the middle.”) But they don’t add up to a nebbishy mess.

The article carefully describes Allen as displaying an “almost terrifying self-assurance,” which is not quite on the mark but at least comes close. He ran off with his girlfriend’s underage daughter and then asked the world what it was looking at. The Soon-Yi affair was reported at the time as a case of selfishness and amoral horniness, but frightening self-assurance (or being a tough little fucker) was also a big part of the mix. The article also acknowledges what should be obvious to anyone who has seen the shower gag in Take the Money and Run: Woody Allen is built. Or, in newsmagazine prose, his “wiry physique, thanks to daily exercise, still exudes the vigor of the athlete he once was—a skilled-enough boxer, in his teens, to have trained for the Golden Gloves competition.”

Otherwise the article is standard, meaning that it assumes Allen is an artist who deserves admiration, as opposed to a skilled film technician who would deserve respect if he didn’t insist on writing his own scripts and bossing around the actors who must choke out his lines. Is Allen a “master of spoken idioms”? No, he’s a master of one idiom, the New York jabber-whine he perfected in his early comedies and still imposes on his unfortunate leads. Name another that he has ever mastered and give an example of where it crops up.

Newsweek doesn’t, of course. Newsmagazines aren’t big on solid, logically sustained argument. When they’re really cooking, they can produce articles that say nothing except what the audience already knows, or thinks that it knows. For instance, that Allen is a great filmmaker who got fancy with his stepdaughter but is still a great filmmaker. Who, as part of his greatness, is a “master of spoken idioms.” Even though everyone in his movies sounds like Allen’s old stand-up act or a Penguin translation from Czech.

Yes, Newsweek does use the word “great,” and it does so in passing, as if the matter needed no discussion. Crimes and Misdemeanors, the article says, is “perhaps the last of Allen’s great New York films.” Let me answer in kind. Allen has never made a great film, not in New York or anywhere else. He made some good films, a habit he shook off after 1975 and that has only occasionally reclaimed him since. He’s not an artist, just a very clever man who thinks he can be an artist by going through the motions. That’s been good enough to win over Alec Baldwin, Helen Hunt and many other actors who have been eager to sign up for his films. It’s also been good enough for generations of college kids and news magazine profilists. Yet it’s not really good. Neither is Crimes and Misdemeanors or Hannah and Her Sisters or Manhattan or Annie Hall or Midnight in Paris or that one about the girls in Spain. No doubt there’s somebody out there making great films that have small budgets and don’t last too long. Maybe after Woody Allen dies we’ll find out who.