Off With His Head

Game of Thrones execs admit to using a prosthetic model of George W. Bush's head—and then jamming it on a pike. 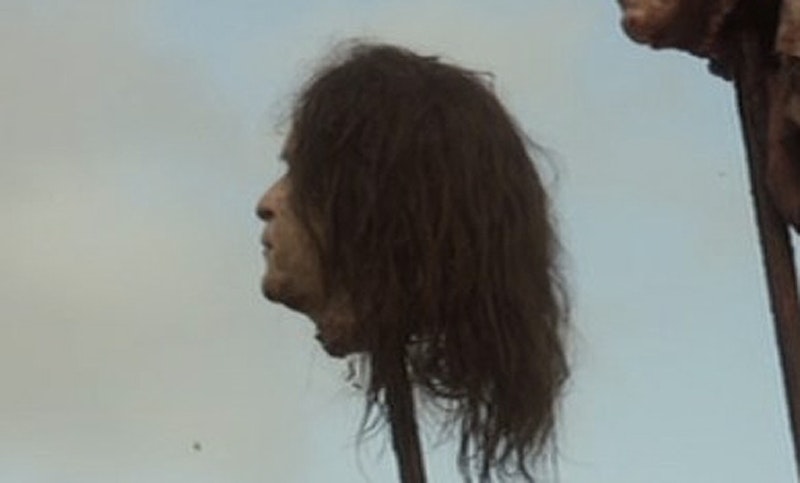 I don’t watch Game of Thrones, but I might have to now. I haven’t succumbed to its fantastical airs, seduced by its incessant sex scenes, or just the prospect of Jason Momoa in a bustier. It’s all thanks to a former American president: George W. Bush. The Internet is abuzz with a story surrounding the two unlikely companions following the DVD release of Thrones’ first season. In the audio commentary, it seems that the show’s creators, David Benioff and D.B. Weiss, have to dig a little deep to bring revelatory details to the countless battle sequences. Or, more accurately, scenes in which severed heads are touted on pikes like lollipops.

One such aside paid off in more ways than one: pulling back the red curtain to satisfy not only the series’ fans, but the rabid media as well, eager for any bait of controversy they can hook their pens into. As it happens, a particular head in one of these human barbecue scenes was modeled after Bush. After identifying the familiar face, the creators remark in the voiceover that, “It’s not a choice, it’s not a political statement. It’s just, we had to use what heads we had around.” And Bush was the only prosthetic they could find? In a statement, following the vague uproar, Benioff and Weiss note that since they can’t afford to have all the prosthetics made from scratch, they rent them instead. Is that who’s at fault then? Some attention-starved worker in the depths of a prosthesis house playing a practical joke?

Let’s imagine for a moment—as many comments in a New York Times arts blog and elsewhere have speculated upon—what sort of situation we’d be looking at had the prosthetic been modeled after another president’s likeness. George Washington? Thomas Jefferson? Probably no big deal. It’s been a few years since their passing, and they are generally admired folk. The media would likely interpret the whole scenario as a harmless, amusing mishap. (Abraham Lincoln’s legacy is about to suffer a huge blow in the shape of the Abraham Lincoln: Vampire Hunter film adaptation, so we’ll leave him out of this.) JFK? Ehhh, regardless of your feelings for the guy, we’re verging on insensitive, especially given his COD. And what of President Bush’s successor, Barack Obama? Forget it. The general consensus seems to be, if you’re going to lambast any president’s image, George W. Bush is your safest bet. If only because, even throughout his own eight-year White House tenure, he’s already been the butt of many a joke.

So, coincidence or conspiracy? While the creators cry the former, I’m not sure it even matters. Regardless of their motives and the humorous outcome, the staging was disrespectful—not to mention anachronistic. Were we not in America, the parties directly responsible at HBO might have lost their own heads. And yet, Benioff and Weiss still don’t seem to be taking it all that seriously, issuing a half-assed apology: “We meant no disrespect to the former President and apologize if anything we said or did suggested otherwise.” If, of course, being the operative word: they see no particular reason as to why this should be offensive. And ultimately, the question arises—do they even need to?

This dust-up has only garnered the show further attention, corroborating the credo of all publicists (save Lindsay Lohan’s) worldwide: any press is good press. HBO promises to remove this snippet of commentary from future DVD releases, but the damage has already been done, the story already circulated. And not even a (public) slap on the wrist for Benioff or Weiss? I wonder how it all makes Bush feel, holed up in Crawford, in his library, no doubt. I hope he’s not contemplating any subliminal messages.