Your Life in Status Updates

Girls is a fine show, but fails to capture the anxiety that comes from constant documentation. 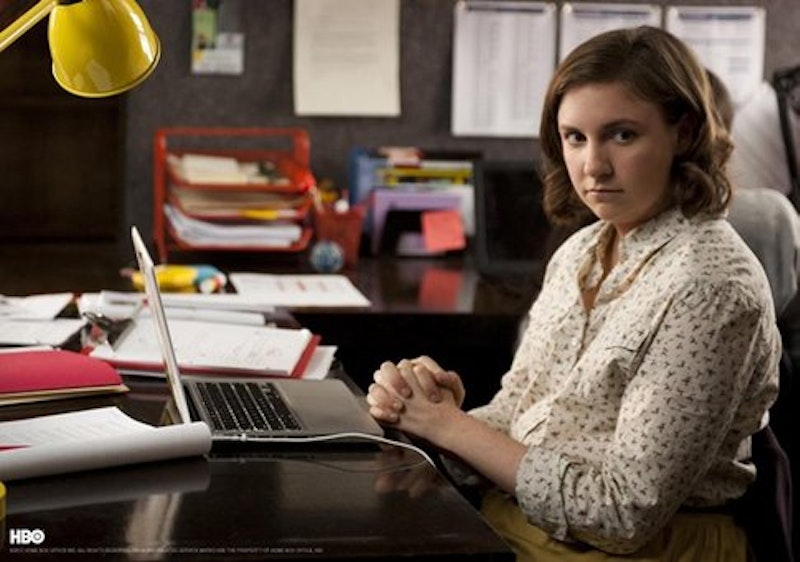 We can all agree that there is a problem with the HBO TV series Girls. Lena Dunham captures part of something but misses a bigger part of something else. The sex is honest but at the same time it’s too gross and unrealistic. Friends do not treat each other with the contempt that Marnie shows Hannah unless they do not like each other, which oddly describes the state of many friendships. The guys that Dunham creates on the show often come across as shallow caricatures of the nice guy or the asshole but most guys are either one or the other. The problem with Girls does not lay with Dunham and the early development of her characters and plot lines. She does an impressive job capturing a cutting reality of the 21st century post-adolescent experience as a deeply self-conscious state, but misses a major situational catalyst that is unique to this era.

Living outside of Brooklyn does not lead itself to this realization, but considering that the neighborhoods—Bushwick, Brooklyn Heights, Flatbush—exist in the show beyond setting, assuming the role of minor characters, it bears attention. My mind immediately went to Dunham’s Brooklyn during a production of a few Tennessee Williams’ one-act plays last weekend in Greenpoint. They were staged in a studio that organized projects ranging from rooftop gardens and hanging tomato plants to reconditioned antique furniture. The play was staged outdoors, without microphones, and about a quarter of the lines were drowned out by the noise of 18-wheelers picking up supplies from a Chinese food supply depot across the street. People scattered around the ground on blankets, and a couple photographers snapped shots of the actors.

The play ended, and the theater company invited us all into the warehouse for an after party. People grabbed beers and mint juleps. Out of nowhere, a bluegrass band pops up and starts playing. The drinkers migrated to the outskirts of the party, and the actors started dancing. iPhones click pictures and the photographers snapped candids. Tweets and Instragrams were sent out to show everyone monitoring that we were having an awesome time, and that is exactly when, as the Piledrivers finished off their first set, it became painfully clear what Lena Dunham missed in Girls.

It is remarkable how uncomfortable a couple of photographers can make a crowd. Add to that the dozen of people snapping up digital pictures on their phones, and you have the source of self-consciousness for Dunham’s world. There is constant documentation, and the effect is that people assume their generally accepted roles. Nobody wants to look foolish dancing, and the guaranteed way to look foolish dancing is to see yourself in a picture of it the next morning a few minutes after a few hundred people saw you look foolish. A dramatic shift has occurred where what was once an essentially private experience is, or at least is expected to become, a very public one.

Dunham brings social media into the norm fairly organically. Marnie checks up on her ex-boyfriend on Facebook in order to catch jealous looks at his new squeeze. Hannah tweets an allusion to her newly contracted HPV saying, “All adventurous women do.” Dunham captures a subtlety in our use of Twitter, a tool to make vague and self-referential comments in the hopes of eliciting understanding or sympathy we are afraid to ask for in person. The awareness of social media that Dunham brings to the show illustrates an understanding of its role in our day-to-day lives.

However, this awareness leads to the question of why it hasn’t extended into our understanding of anxiety as it relates to the show. Hannah classically exhibits symptoms of social anxiety and she has a hyper awareness of her social standing and body image. Dunham attributes Hannah’s feelings as completely intrinsic, beginning and ending in her own head, but that is hardly novel exploration. People in their 20s have always felt completely lost in the world as it bares itself to them. We see this in Joyce’s Stephen Dedalus and Updike’s Rabbit Angstrom, but the circumstances and environment where characters experience these feelings constantly change. Joyce had early 20th century Dublin, and Updike took on the middle of the century suburban America. While the comparison between two of the most hallowed characters of the English language may seem thin, it is in television where this century’s most dynamic characters exist. Critics and academics alike have extolled literary merit to Girls and its predecessors: Mad Men, The Sopranos, and The Wire.

Moments that can be forgotten do not really exist anymore. Memories do not have the fuzzy edges of nostalgia because carbon copies of them pile up with tagged photos that capture every awkward step, every imperfect stare. There is a constant background noise of the documentation, a recording that removes the everyday from these times and it paralyzes everyone in to the roles they are meant to play. The performers perform, and everyone is a critic. Dunham’s failure to address this issue pares Girls down from a complete picture of biting realism, allowing for far too many moments of portentous flair.