Days Of Our Lives bids its big, bad wolf adieu. 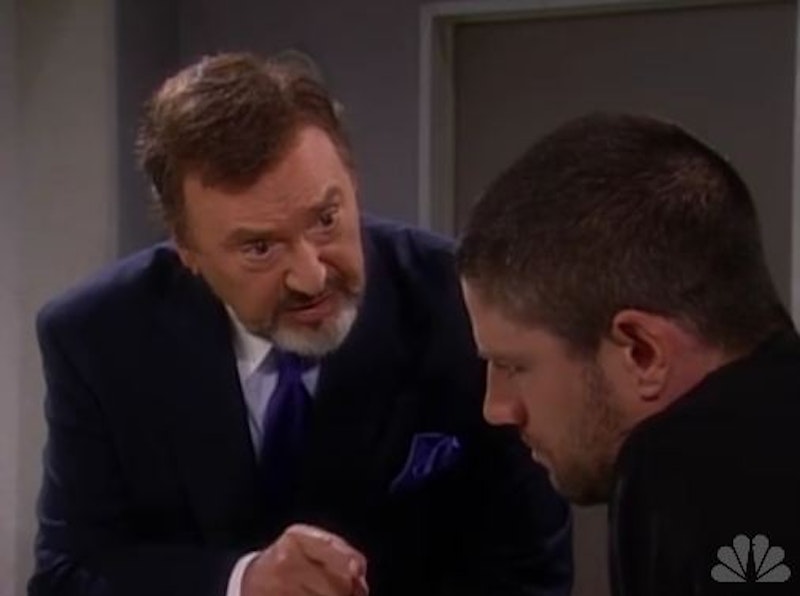 Stefano DiMera lived a life of old-school villainous opulence. An accent so thick you could cut it with a switchblade. Henchmen at work, mostly off-screen. A stately mansion full of dark-paneled surfaces, equipped with a study containing a chess board, hard liquor in a crystal carafe, and an unnerving portrait of himself in a contemplative, lupine humor. Everyone else in the fictional Salem—even members of his own family—potential victims.

DiMera, as portrayed by actor Joseph Mascolo on Days Of Our Lives for the better part of three decades, was the kind of bad guy whose reputation was built on every kind of behind-the-scenes skullduggery imaginable: kidnapping, murder, defrauding, blackmail, brainwashing, framing. You never got the impression that DiMera’s fortune brought him any real pleasure; he got his kicks from manipulating others as though they were pawns on his chess board—a characterization that could easily be extended to the Days showrunners and head writers whose varied machinations have so convoluted the program’s plotlines and cast over the past several years.

On soap operas, nothing’s ever set in stone, and it’s worth nothing that DiMera has survived more “deaths” than I have fingers. But it seems fair to say that the Stefano DiMera era is over. On the Friday, June 1st episode of Days, an unknown assailant shot DiMera from behind, killing him. The murder was framed as a plot point; several characters who have viable motive confronted the vain, charismatic crime lord in his study, threatening him with the same handgun before the fatal act occurred.

The killer’s identity is hardly significant. What is? Days now has a bad-guy credibility gap. Salem is without a heavy-handed cretin whose furious glare could bore holes through sheets of double-reinforced admantium, a cold, loathsome figure whose camp value is nonetheless such that he merits a name-drop in whatever 2015’s analogue to Legally Blonde is. Days’ ongoing grooming of various bastard Brahmins to step into DiMera’s tailored spats has yet to bear fruit. Scion EJ DiMera (James Scott) shows the most promise, displaying an impressive capacity for deception and cruelty, but he’s not there yet. Titan head Victor Kiriakis (John Aniston) can match Mascolo gravitas for gravitas, but lays on the condescension and sarcasm so thick that it’s difficult to imagine him destroying lives just for the Hell of it. What newbie tycoon Ian McAllister (Ian Buchanan) is capable of is unclear; thus far, he radiates a wooden sense of menace and suggests the cover model from Bret Easton Ellis’ American Psycho as a senior citizen.

Mascolo is 83; he more than deserves his retirement. And he can rest easy, because Days will never quite be able to replace him.