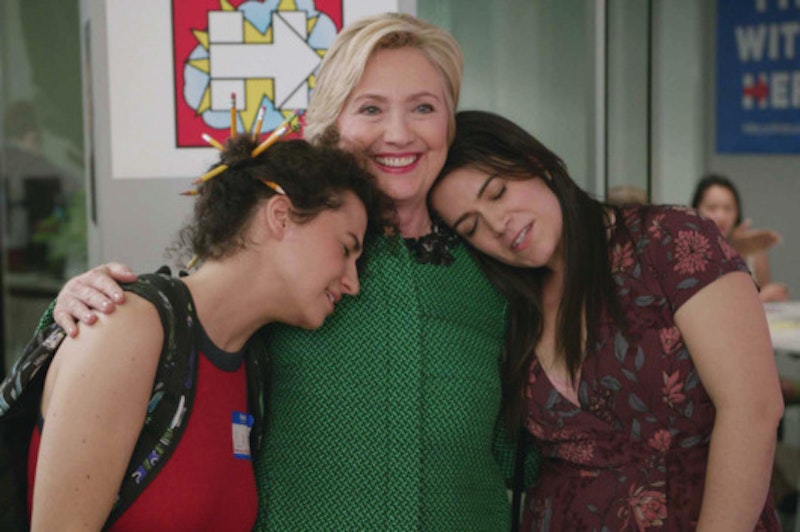 Comedy Central’s Broad City is a lot of things—it’s lit, it’s fam, it’s bae, it’s so important, it’s everything. But why in the world did Ilana Glazer and Abbi Jacobson shoehorn a Hillary Clinton cameo into a recent episode? Broad City is the absurdist antidote to Lena Dunham’s pretentious and humorless Girls. It makes sense that Dunham is a Hillary supporter, an eager beaver ready to personally campaign for the former First Lady, Senator and Secretary of State. Dunham was raised in the crustiest of the upper class of Manhattan art families—in her memoir, she reminisced about being totally out of control with her elementary school caviar habit. Despite the zeitgeist hype of the first few seasons of Girls, Dunham is as out of touch as Clinton herself. I jumped ship after the first season, and it was so refreshing when Broad City came along and brought the “millennial women in New York” scenario back from the dead after Girls buried itself in very important issues. Abbi pegging her longtime crush was more fun than the utter drag of figuring out whether or not Adam raped.

I still love the show—how can you not? It’s the funniest show on TV, more hip and contemporary than the bongo It’s Always Sunny in Philadelphia, and they manage to cover a lot of really important issues without sacrificing any of the zany cleverness of 30 Rock. Glazer and Jacobson are so much more relatable than Lena Antoinette, and they’re not saddled with any of the self-claimed “voice of a generation” baggage. I can’t count how many times my girlfriend and I have screamed “me!” while watching Broad City, high on the fumes of a show that feels for us and of our generation without being preachy or on the nose at all. It gives Generation Y a good name. So anyway, this Hillary business. She shows up in an episode called “2016,” and only very briefly at the end, after the credits have started rolling. Politics don’t come up at all for the first half of the episode, where we follow Abbi through a Lord of the Flies-style trip to the DMV, and Ilana as she struggles to find work through a temp agency run by the hilarious and ever underrated Rachel Dratch (people think Tina Fey and Amy Poehler are a power duo, but it’s really the Fey/Poehler/Dratch trio). Ilana becomes a bike messenger and happens to deliver a package to Hillary Clinton’s headquarters.

She loses her shit once she realizes where she is, and immediately signs up, braying “YAAASS YAAASS YAAASS!” as her boss tells everyone in a meeting all the answers to frequently asked questions (“No, Hillary is not a witch!”). It’s all fairly benign, no out of character politicking, but it comes out of nowhere, and I have a hard time believing they wrote an episode about the Hillary Clinton campaign before they were contacted by her team. So Clinton shows up at the end in a ridiculous, embarrassing, and frankly scary slow motion cameo, Ilana and Abbi losing their shit as Hillary appears and approaches them, like a boss, and they freak out at her while Hillary stands there with her signature stare. Abbi blurts out “I pegged!” which is amazing, but it all left a sour taste in my mouth. Sure, in any other year, it would make perfect sense that Abbi and Ilana would be Hillary partisans and have her on the show. But c’mon, these girls should be Feeling the Bern. Granted, the episode was filmed last summer, when Hillary was a foregone conclusion and a Bernie cameo would’ve been bizarre—he was supposed to be out by now. They just got unlucky, but “2016” is the first time Broad City has felt out of touch.