Returning to the Source with Milford Graves

Milford Graves Full Mantis is a drifting but incisive look at the life and art of avant-jazz musician Milford Graves. 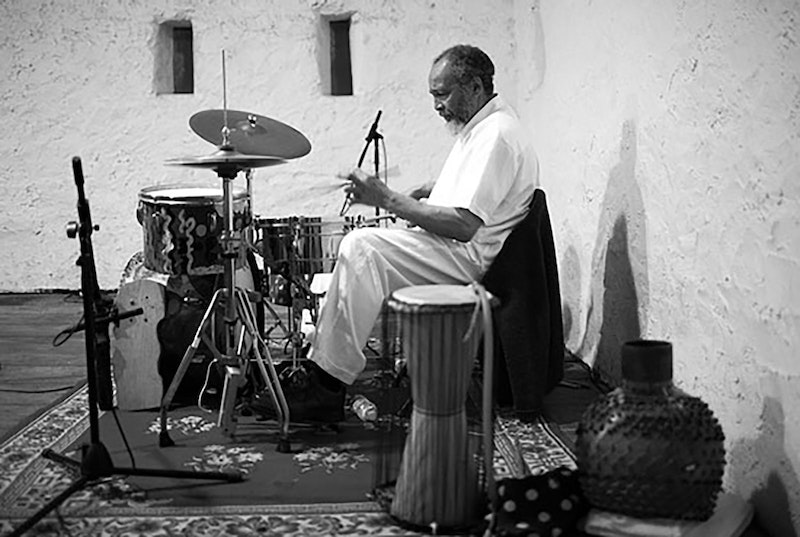 Is there anything as turgid as the music documentary? It’s hard to remember the exhausting list of films about rock bands and pop giants, strictly following the formula set down by VH1’s Behind the Music and the HBO, conflict-obsessed school of documentary filmmaking. Step one—start with grainy black and white footage of a hard but hopeful childhood. Add hyperbolic praise from as many industry talking heads as you can gather. Call Moby for an interview and get his take. The morass is as indistinguishable for me as episodes of Frasier.

Meginsky pulls together conversations with Graves in his garden, aural demonstrations in his cardiology lab-cum-recording studio, as well as photos and archival film of the musician from the late-1960s and 70s, performing alongside the likes Albert Ayler and Giuseppi Logan. An important note is that most of the performances in the documentary are pulled from Graves’ own archive at his house in Jamaica, Queens. These electrifying concerts (including some wild shows on tour in Japan, one notably at a school for autistic children) had never been screened before this documentary.

The music of Graves is presented as only one aspect of his singular genius and cosmology. His study of the heart and sensory systems (especially the sympathetic and parasympathetic nervous system), his practice and teaching of the Yara martial art, his exploration of sound—all emerge from a uniquely self-made philosophy that stems and winds organically from an unquenchable curiosity to learn by returning to the "capital-S" Source.

Graves returns to the “chaos heart” as a basis for his study of rhythm, the slight arrhythmia of palpitations to serve as a foundation for his free drumming. He studies the movement of the praying mantis to inform his understanding of martial art. As Graves lectures, what starts as labyrinthine explanation snakes its way into brilliantly insightful epiphany—not unlike the winding nonlinear structure of Meginsky’s narrative.

As a student of Graves for eight years, it’s no wonder Meginsky would structure his film in accordance with his professor’s philosophy. He makes his intentions clear from the very first shot: a mirror image of Graves, reflecting an exacting portrait of the man free from commentary. I found it refreshing to let the concerts, autobiographical anecdotes, and the environmental details of Graves’ home and garden communicate directly to the audience. The documentary was free from the usual talking heads and definition by hearsay we’re so acclimated to coming across in our hot-take obsessed Insta-world. If art has a “function,” it inspires and surfaces more organically when there’s time to digest. It’d be beneficial for us to return to the primary source and draw our own conclusions.