Film Review: Life of the Party Killed by Atrocious Script 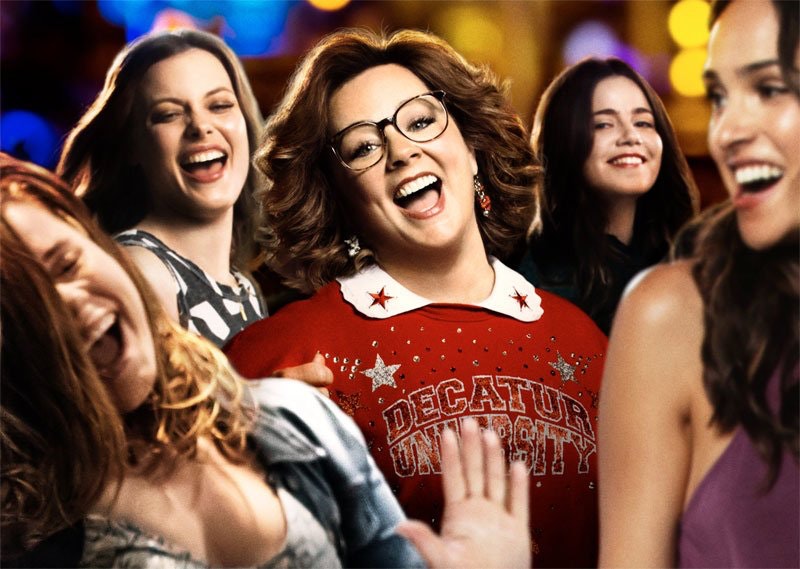 Life of the Party, in a lot of ways, resembles several Melissa McCarthy vehicles of the past. It’s a high concept comedy, directed by McCarthy’s husband Ben Falcone, that isn’t really funny but manages to wring a modest amount of laughs out of the actress’ presence, charm and go-for-broke spirit.

This film, though, is worst than the rest, largely because it’s wildly disjointed, with a plot and tone that are all over the map and character motivations that don’t make a lick of sense. It’s not the year’s worst movie, but it may come from the year’s worst script.

In Life of the Party, McCarthy stars as a fortysomething woman who, right after dropping off her daughter for her senior year of college, is abruptly dumped by her husband (Matt Walsh.) Kicked out of their house, she enrolls in that same college, and finally finishes her degree.

Going back to school gives her a group of friends (her daughter’s sorority sisters), a hunky college-aged boyfriend (Luke Benward) and the ability to discover herself after exclusively tending to the needs of others for the previous 20 years. That’s could’ve been the topic of a decent movie.

But Life of the Party isn’t that movie, thanks mostly to this atrocious script. The driving force of the entire first third is that the daughter is annoyed that her mom is at college with her… until, all of a sudden, without an explanation, she isn’t annoyed anymore. The question of how McCarthy is paying the tuition is completely unmentioned for the film’s first hour, until it suddenly becomes the main driving force of the plot. And after a full hour that evokes Old School, the film pivots in order to lift its entire third act from PCU, with Christina Aguilera standing in for George Clinton.

Even beyond that, there are two or three set pieces that are cringe-inducing, especially an in-class presentation that’s meant to evoke the flop sweat newscast from Broadcast News but is instead both stupid and endless. And of course, we get that old hack standby, the older-people-accidentally-get-stoned sequence. And a handful of characters, including a pair of mean girls and McCarthy’s ex’s new wife (Julie Bowen), are loathsome to the point where it’s a distraction.

There’s some good stuff at the margins, much of it involving Maya Rudolph as McCarthy’s best friend and Gillian Jacobs as one of the friends, whose reason for being older than all of the other college students is one of the few jokes in the movie that pays off.

Melissa McCarthy remains a top comedian; between Bridesmaids and her Sean Spicer impression, she’ll always be in the pantheon. But vehicles putting her at the center have a wildly uneven track record, and while neither Tammy or The Boss were masterpieces, Life of the Party may represent a new low.

Measure of a Man is out of time. C

Measure of a Man belongs to a few well-worn subgenres. It’s a coming of age drama, a The Wonder Years-style period nostalgia fest, and a disquisition on That One Summer That Changed It All. It owes parts to a long list of movies—Dirty Dancing, The Apprenticeship of Duddy Kravitz, A Walk on the Moon, Adventureland—that you’re better off watching instead of this one.

The film, directed by Ken Loach’s son Jim, is set in the 1970s, and based on the autobiographical novel One Fat Summer by the noted sportswriter Robert Lipsyte. However, Lipsyte is 80 years old and was a teenager in the 1950s rather than the 70s, which could be why everything here feels so disjointed and off.

Measure of a Man—not be confused with another movie of the same title from just two years ago—is the story of Bobby Marks (a very good Blake Cooper), an overweight teenager on vacation with his parents (Luke Wilson and Judy Greer) and his comely sister, in 1976 upstate New York. Dealing with obvious trouble in his parents’ marriage and also with a trio of particularly sadistic bullies, Bobby decides to get a job gardening for a wealthy, abrasive doctor (Donald Sutherland.)

Think of it as Dirty Dancing without the romance or dancing, and there’s some sweet nostalgia in the period setting, where the plot is more about the protagonist’s self-actualization than anything else. Nothing wrong with that, but ultimately a few odd choices serve to sink the film.

First and foremost: one character, the girl Bobby likes, is defined by her having a big nose, to the point where the fat boy and the big-nosed girl bond over their shared status as hopeless social outcasts. But the actress playing her doesn’t have a big nose, and is a conventionally attractive young woman. The makeup supervisors didn’t even have her wear a prosthetic nose. It’s sort of a mind-boggling filmmaking choice that took me out of every scene featuring these characters.

There’s some weird town/gown material, and the part where the lead character reads very much as Jewish, as does the girl he likes, except this is never spelled out in any way. The only character in the film who’s established as a Jew is Sutherland’s landowner, who reads as a WASP in just about every way.

The bullying plot is infuriating, and the way it’s resolved is both unconvincing and weird as hell.

If you’re someone who was young in the 1970s and can’t get enough of summer-at-the-lake nostalgia, you may find things to enjoy in Measure of a Man.

But otherwise? Go see one of those other movies instead.