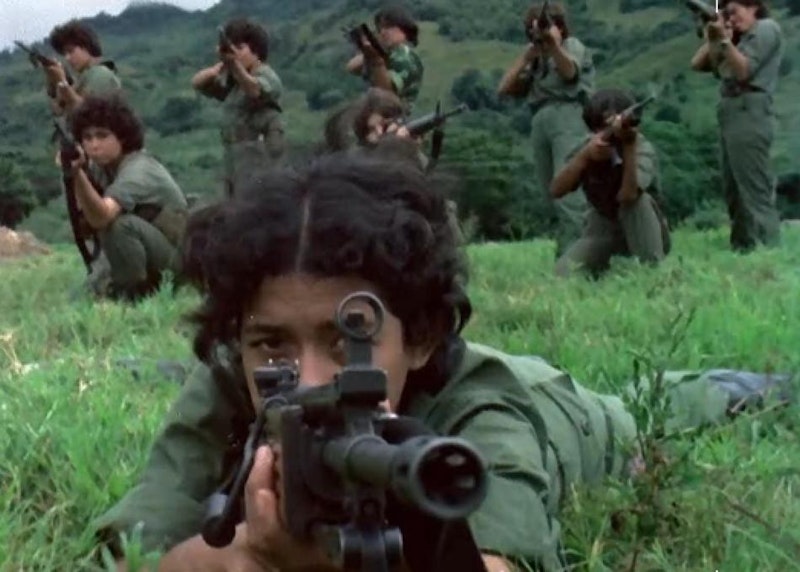 The 1979 Sandinista revolution in Nicaragua ousted U.S.-backed dictator, Anastasio Somoza, whose family had controlled the tropical nation since 1912. Mirroring the Cuban revolution 20 years previously, an extremely small and under-equipped guerilla force overthrew Somoza with superior planning and tactics. ¡Las Sandinistas!, a new documentary directed by Jenny Murray and produced by Sarah Winshall, is the fascinating, harrowing, and underreported story of the women under whose leadership not only brought destruction to the Somoza regime, but oversaw a burgeoning socialist nation instituting what Noam Chomsky would call “the most significant social reforms in the hemisphere.”

Screened this past weekend at the Maryland Film Festival, the documentary follows the lives of Dora Maria Téllez, poet Daisy Zamora, and thousands of other women who gave their lives to FSLN and the revolutionary cause. Murray expertly gives space for these women to tell of lives lost, politically segregated and broken families, and the constant struggle against the chauvinism of Nicaragua—including their male comrades. Because if it wasn’t enough for Dora Maria and her co-comandantes to live in the jungle, train a force that was 30 percent women, stretch rare resources, and ultimately overthrow a well-equipped and merciless regime, they also strived to carve out a place for women in a new society springing up in the face of deep-rooted, patriarchal mores.

In the 18 months after the revolution, there was hope that Nicaragua was slowly heading in this direction. While the directorate remained all men, women created important government agencies from scratch. The Ministry of Culture hosted events and spread literacy throughout the country, increasing it to 88 percent of the population. The Ministry of Health undertook a vaccination campaign that halved infant deaths. Women were actively improving and shaping their country for the better.

But, as Dora Maria laments, “You believe that when you take the first step, its impossible to go back. But life is not like that.” The war with the U.S.-backed Contras served as an excuse for men to force women back into “traditional” gender roles, and removing them from positions of power. Murray captures the mood of these inspirational women—the bitter disappointment coming on as suddenly as an earthquake in Managua.

The film festival audience was with them completely. I felt absolutely deflated. Why ¡Las Sandinistas! succeeds as a documentary, and what it does so well, is crystalize its narrative enough to immerse an audience and invest them emotionally without overloading them with too much information or detached newsreel archival footage. In fact, the footage chosen for the film underscores and celebrates the humanity and femininity of these women. Images show Dora Maria smoking a cigarette and laughing with friends in fatigues. A young 22-year-old standing stoically but shyly at her own victory parade. Daisy Zamora’s newborn baby crawling around the newborn Ministry of Culture as Daisy talks with her advisors on how best to grow. The matter-of-factness in which these women related their accomplishments, growing into young women in the midst of it all, left me in awe.

Near the film’s close, Dora Maria relates that “there are two faces of memory”—the experiences that stick with us forever and memories that’re completely erased from our minds. Currently, she and the women of Nicaragua struggle with a Sandinista government that is more and more reminiscent of the repressive regime they overthrew in 1979.

They take to the streets in a war of information as women are still repressed in Nicaragua, and mostly everywhere else in the world today. I hope ¡Las Sandinistas! picks up distribution as the film works so well as a testament to the valiant memories of these women. We need to save stories like these from erasure—to remind ourselves that change is possible.