Do You Really Want to Go Where People Are All the Same?

Cheers' nostalgia has an ominous edge. 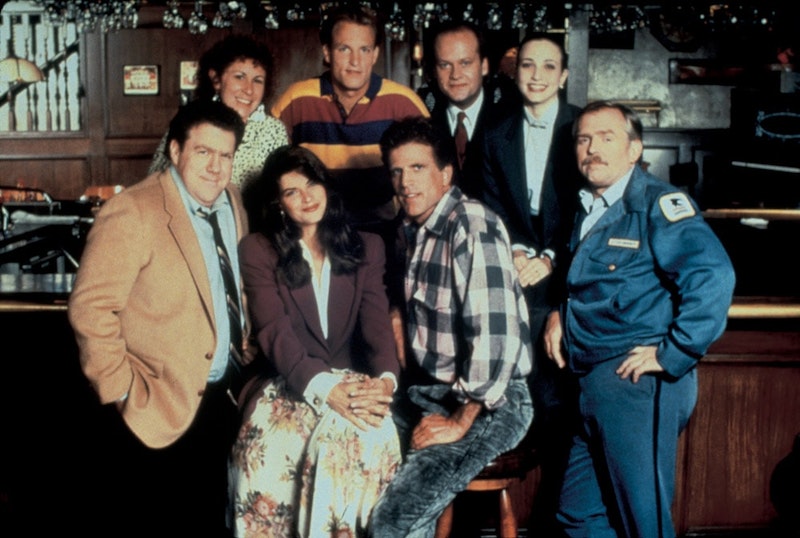 This is the last in a series on 1980s comedies. The previous entry, on Monty Python's Meaning of Life, is here.

Cheers was a remarkably gentle show.

Re-watching the first few episodes of the sitcom from 1982, the writers' aggressive refusal to be aggressive is startling. Today, the aesthetics and approach of television and film have largely fused; sitcoms like Santa Clarita Diet and The Good Place (also starring Ted Danson) are high concept, sexually frank, foul-mouthed, and not infrequently gory. The giant giraffes on the loose in The Good Place, or the projectile vomit erupting from Drew Barrymore in Santa Clarita Diet seem to have escaped from Monty Python's The Meaning of Life, rather than from sitcom history past. Even the unadventurous network comedy The Big Bang Theory exists in a post-Seinfeld, post-Simpsons world, where comedy is expected to make some pretense at hipness, no matter how feeble.

Cheers, though, leaned into its stodginess. The Big Bang Theory's theme music is a goofy, witty, fast-paced song by alternative rock icons the Barenaked Ladies. In contrast, the famous opening jingle for Cheers by unapologetic hack Gary Portnoy is saccharine easy-listening, which played over an opening montage of retro-images from the 1920s. "You want a place to go where everybody knows your name," the inoffensive vocal warbles. That place you want to go isn't just a location but a time. When you go down those stairs into Cheers, you're stepping into your grandpappy's shoes.

The plots and gags of Cheers are resolutely low-key and heartwarming. The first skit in the series shows an obviously underage kid trying to buy a drink from Sam Malone (Ted Danson.) Sam rebuffs him, establishing his bona fides as a responsible quasi-patriarch. In the fourth episode, actor Harry Anderson shows up as "Harry," a friendly con man who pleasantly fleeces bar patrons out of 10 or 20 dollars at a pop. No one tries to call the police on him or punch him in the face. Instead his shenanigans are treated as a friendly eccentricity. He's a lovable rogue—and you can tell he's a lovable rogue and not a scary gangbanger because he's white, and dresses like he's strolled out of a Frank Capra film.

It's not just Harry who's white. There are no black people in the main cast, though the bar is located in Boston, and though Sam is supposed to have been a pitcher in the major leagues, where he presumably would’ve had many black colleagues. One of the gags in the early episodes involves a father upset because his son is marrying a black gay man. Coach (Nicholas Colasanto) encourages him to be tolerant and accepting, but that advice apparently doesn't extend to the show's own hiring practices.

The one source of tension in this idyllic retro rest spot is gender politics. New waitress Diane (Shelley Long) is a well-read intellectual and member of the upper crust. Sam, as the bar owner, is wealthier than her, but anxious that her accomplishments mean that she'll look down on him and the women he tends to date.

Enlightened women are out of place in Cheers' nostalgic milieu, and that disconnect provides much of the show's ongoing tension. In the show's fourth episode, Sam kisses Diane for the first time. She immediately tosses him onto the billiard table in a karate move. She explains, sheepishly, that the reaction was automatic; she learned it in a course on "Practical Feminism." Feminism stands in the way of the show's romantic plot arc—which is unfortunate insofar as Diane seems to wish she hadn't acted so hastily, but fortunate, since otherwise the series would have ended almost before it began.

The series did not end; it went on and on and on—11 seasons and 275 episodes. It's easy to see the show's appeal. Watching it is restful and undemanding; all the characters are likable and nothing too bad ever happens. It's nice.

The niceness, unfortunately, is predicated on the sameness, which in turn requires that people who aren't the same are ignored or forgotten. Back in the early-1980s, when Boston was roiled by racist riots and protests against school desegregation, Cheers was nostalgic for that time when America was great, friendly, and untroubled. There was never such a time, of course. But the dream that there was sells "Make America Great Again" caps, and everything that goes along with them.