Return of the Mank 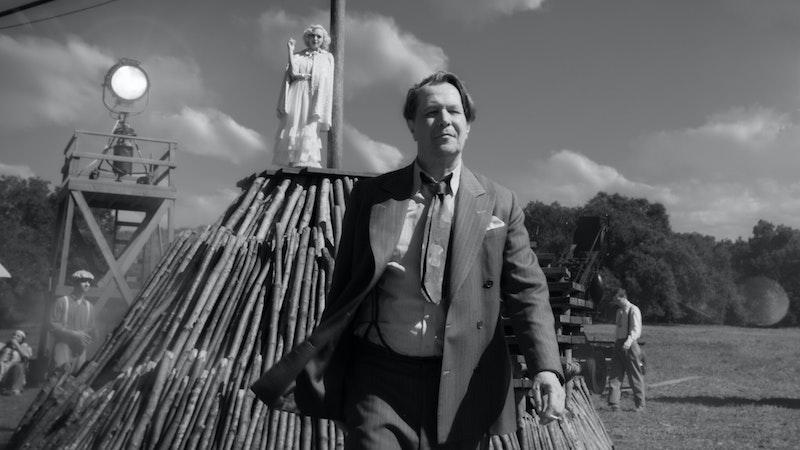 Something I couldn’t help but notice as I logged on to Netflix this morning was that David Fincher’s new film Mank had pride of place at the top of my home screen. Not that I was surprised to see it there. It’s been a punishing year for the film industry, and with the promise of a traditional awards season scuppered, the focus is on streaming services to churn out some Oscar contenders. Now more than ever – spurred by the sudden shock announcement that Warner Bros. will be releasing its 2021 slate on HBO Max – Netflix is sure to catch the attention of Academy voters with a glitzy period piece about Hollywood’s Golden Age. The irony will almost certainly be lost on them. I only mention this because back in November of 2018, when I eagerly logged on to watch The Other Side of the Wind, what greeted me instead was the first season of Frederator Studios’ Castelvania. Following the success of Mindhunter, Netflix owes more to Fincher than it ever did to Orson Welles, but all the same it feels more than a little cynical that they’re now offering the spotlight to a movie which purports to tell the “true” story of Citizen Kane’s authorship, all while the real Welles languishes six feet under, buried by the algorithms governing their distended archive.

Try as Fincher, and indeed Netflix, might to wrestle attention from Welles, his presence hangs over the project like a spectre at the feast. Mank’s announcement reignited fierce debate amongst critics, opening old wounds surrounding Pauline Kael’s widely-discredited screed ‘Raising Kane’ and the almost voguish tendency to portray Welles as a pompous, fraudulent egomaniac. None of this was helped by Fincher’s own inflammatory comments – likely provoked by these defences – claiming in one interview that the great director had been ruined by “delusional hubris”. Welles is actually absent from most of the film. He’s at once everywhere and nowhere. The very first frame is a title card announcing his entrance into Hollywood, subsequently appearing once under heavy prosthesis barking orders down the phone as he prepares to audition for a role in Heart of Darkness – geddit? – and again in silhouette, bizarrely sporting his signature hat and cloak from F for Fake. His longest, and most insulting appearance is saved for the very end. Holding a script which the film would suggest he had no hand in writing, Welles flies into a jealous tantrum, trashing a liquor cabinet in a bathetic crescendo closer to Walk Hard than anything I’d expect from the man behind Gone Girl or The Social Network.

Focusing his lens on the vital and often overlooked political context behind Kane, Fincher instead centres the narrative on a notorious dispute between newspaper tycoon William Randolph Hearst, MGM studio heads Louis B Mayer and Irving Thalberg and the socialist activist Upton Sinclair (played by Bill Nye of all people). Into this milieu, the freewheeling screenwriter Herman J Mankiewicz finds himself flung, caught between his obligations to the studio and his political affiliations, and it is here that the seeds of “his” masterpiece begins to germinate. On paper, it’s a fantastic premise, and one which I thought Fincher would have no trouble turning into a film. It’s something of a passion project too, having remained in development hell for nearly 30 years, with initial drafts (written by Fincher’s late father, journalist Jack Fincher) circulated through Hollywood as far back as 1994. Watching Mank, though, you start feeling the weight of that time almost immediately, and one is suddenly reminded of that old axiom that a lot of things sound good on paper.

Fincher has crammed every available space with exposition, quotations and anecdotes, all apparently taken from his father’s original screenplay – Jack Fincher remains the only credited screenwriter – to the point where the film starts playing like a checklist. Restrained by the excessive dialogue he’s working with, Fincher can do little more than stage a series of slackly-edited takes: vehicles for speech and more speech. Mankiewicz’s quirks and wit are all rolled out in an orderly fashion, with characters casually dropping his achievements here and there to give him some weight. For a film that is nominally a celebration of Mankiewicz, it’s a remarkable disservice to his talents as a writer and for that matter a polemicist. His career before Kane is compressed into a single, brief aside about an unpublished Hitler script, and for nearly half the running time he’s barely conscious. “I do my best thinking before I fall asleep!” Mank protests, but beyond reciting lines from a finished screenplay, we never see any of that thinking in action. Especially frustrating for a man as gifted at pathologizing his characters as Fincher can be.

Ironically, there is a particularly fascinating examination of form and creation at the midpoint of the film: with a mixture of disbelief and shock on his face, Mankiewicz is shown a fabricated newsreel commissioned by Thalberg to discredit Sinclair. “You don’t think anyone old enough to vote is gonna buy this shit?” the director asks Mank. “Only the ones who believe King Kong is ten storeys tall or Mary Pickford a virgin at 40”, he replies. The scene stands as a searing inversion of the kind of ‘movie magic’ platitudes that the Academy usually laps up, showing in explicit terms the terrifying political power the film industry wields. But moments like this are few and far between. Fincher’s attempts to mount a mature discussion clash with the endless, childish posturing, the petty-minded vindictiveness, the oh so very conscious homages and tedious classical allusions.

It’s hard to tell who Fincher thought he was impressing with all this. ‘Raising Kane’ has faded from the memories of all but the most disgruntled academics and journalists, none of whom have anything good to say about it. Welles maintains an ardent critical following, and even those who only have a passing knowledge of cinema history still recognise him as the figure behind his films. To hear Fincher tell it, you could suppose he did it for love. There’s a joke to be made there about the parallels between Charles Foster’s downfall and the cliff at the end of Fincher’s own creative drive, but I’ll leave it there.