Charles Vidor's Blind Alley (1939) was, in retrospect, wildly optimistic about the potential of the then-new science of psychoanalysis. 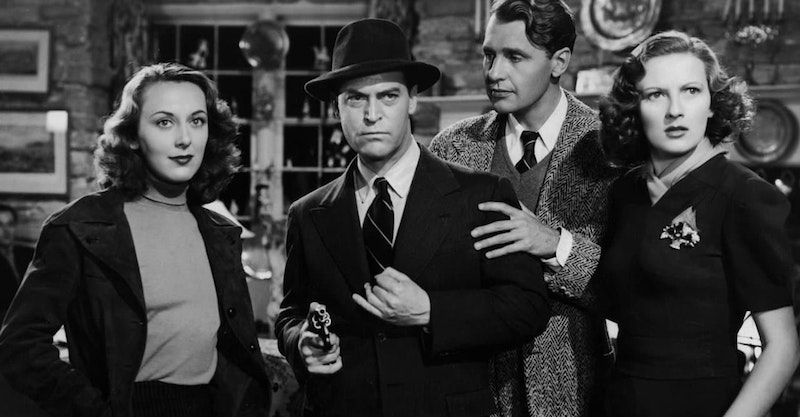 In November the Criterion Channel bundled together 17 movies into a collection called “Frame of Mind: Psychiatry On-Screen.” The films range from drama to satire, film noir to science fiction, each a story about psychiatry, and depicting psychiatry a little differently. The earliest was made in 1939, the latest in 1991; watch them one by one and you see that over half a century the kind of story that gets told about psychiatrists changes. Psychological ideas have become mainstream.

And it starts with a genre story in which a doctor of the mind uses the power of his insight to destroy a killer. Charles Vidor’s Blind Alley was released in 1939, an adaptation of a stage play by James Warwick that was copyrighted in 1935 under the title “Smoke Screen” but renamed “Blind Alley” before its first production in 1936. The screenplay’s credited to Philip MacDonald, Michael Blankfort and Albert Duffy, while the IMDB notes Lewis Meltzer was an uncredited contributor to the dialogue.

Anthony Shelby (Ralph Bellamy) is a professor of psychology with a wife and young son. One night a gangster named Hal Wilson (Chester Arthur) bursts into their lakeside home with his small gang and holds them and their guests at gunpoint. Wilson’s just broken out of prison, and one of his partners is coming by boat later that night to spirit Wilson out of the clutches of the law. When a student of Shelby’s comes to visit Wilson shoots him dead, and the professor determines to use his knowledge of the mind to take the gangster’s psyche apart.

The idea’s strong; a harbinger of home-invasion movies to come, but the execution’s a mixed bag. Arthur plays Wilson as a cartoon of a gangster bully, obviously insecure. Bellamy’s Shelby is too stark a contrast, preternaturally calm, a benign self-confident patriarchal figure who never raises his voice nor shows any sign of stress. There’s a logic to that, given the game he’s playing with Wilson, but his steadiness undercuts the tension of the situation. Ann Dvorak, playing Wilson’s moll Mary, comes off the best of the film’s performers as she instills a relatively minor role with depth and variety.

The dialogue’s brisk in a 1930s way. Characterization’s unsubtle but effective. Wilson’s willingness to talk to Shelby is contrived, and the psychological ideas simplistic, but you don’t object in the moment. It moves quickly, and if there aren’t any real surprises, there’s at least a solid structure. It’s a highly watchable movie.

Narratively, the film reworks the interaction between Shelby and Wilson from the play, adds a subplot involving guests of the Shelbys, and alters the ending. The play had Wilson shoot himself, which the Production Code absolutely forbade. More significantly, the main action of the movie becomes Shelby’s analysis of a recurring dream of Wilson’s.

Not all the changes are particularly effective. In particular the subplot about Shelby’s guests is underdeveloped. The idea of having multiple things going on in the house is fine—it makes the dialogue between Shelby and Wilson more believable if we assume they’re working through it off-camera and we only see the critical bits, so having something to cut away to is necessary. But the guests are extraneous to the action, and thematically their subplot never presents any clear contrast to the Shelby-Wilson duel.

More interesting, though given less screen time, are two maids tied up in the basement, one of whom struggles to freedom and calls the cops. Shelby draws Wilson a diagram of the mind with the unconscious below conscious thought, to show how dreams are coded memories that bubble up through the censor band preventing the conscious from knowing uncomfortable things; the maids, imprisoned beneath everyone else, are that image come to life—repressed truth sneaking out. (It’s tempting to consider the term “censor band” a glance at the Production Code, and imagine the film itself as a dream that hides things the moral dictators of the Hays Office wouldn’t consciously allow.)

Wilson’s dream, which prompts Shelby’s explanation, is more like a dream than most Hollywood dreams: Wilson runs from rain, then he’s sheltering under an umbrella, but rain’s coming in through a hole in the umbrella, and he feels the rain is dirty, so he reaches up to block it with his hand, but he can’t, and then there are bars around the umbrella and he’s in jail. It’s weird and scrambled and has the incoherency of an actual nightmare. It also holds latent sexual meaning: pollution from fluid that seeps through a hole, toward which the male dreamer stretches out a part of his anatomy only to be punished.

The explanation of the dream, to do with Wilson’s betrayal of his father as a boy, is underwhelming in character terms, but the visual technique makes up for it. The dream’s shown in photographic negative. Then when Shelby solves the meaning of the dream, it triggers a memory we see in flashback from Wilson’s point of view with a long take and some expressionistic sets and camerawork. Cinematically, this sells the centrality of the dream and the memory.

Still, it’s difficult now to buy the power of Shelby’s analysis. A mix of wizard and scientist, Shelby has easy mechanical answers to the complexity of human life, the wielder of a science that can fix minds like widgets. He works out the meaning of Wilson’s dream, and like magic the gangster’s neutered, unable to fire a gun.

You can find a lot of subtexts in Blind Alley—the class distinction between the professor and the gangster, a reference to Alice In Wonderland, the way Shelby’s son shows he can read by picking out the word “killer” from a newspaper headline. Not least of these subtexts is the film’s use of psychiatry and dream-analysis. It was, in retrospect, wildly optimistic about the potential of the then-new science. But the optimism at least made for a decent yarn.