Happiest Season is fine, but it's also really strange, anachronistic, and full of little plot details that don't add up. C 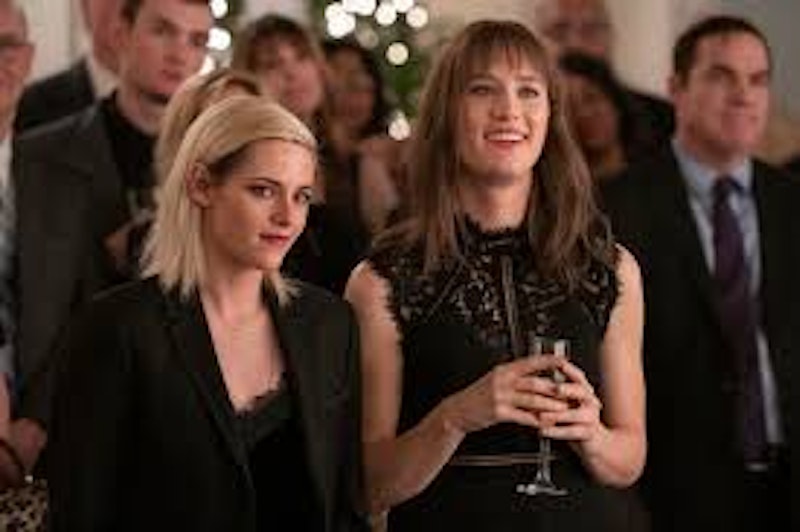 Happiest Season, a planned theatrical release for Christmas that was sold off to Hulu and made its debut last week, has emerged as a big hit, if you believe Hulu's self-reporting, as well as social media measurements.

The film, directed by actress Clea Duvall, is a deserved success, and also has an enjoyable cast with likable actors. But it's also really strange, and anachronistic, and full of little plot details that don't add up. The plot of Happiest Season represents a cross between the ubiquitous Hallmark/Lifetime Christmas genre, and an LGBT family comedy of manners in the tradition of La Cage Aux Folles and its American remake, The Birdcage. Harper and Abby (Mackenzie Davis and Kristen Stewart) play a lesbian couple who lives in Pittsburgh. Abby's parents died when she was young, giving her a jaundiced view of Christmas, so Harper invites her to spend the holiday with her family. But on the car ride en route, Harper admits that she had lied the previous summer about having come out, and that the family has no idea they're gay.

There are farces and hijinks, mostly involving the couple trying to keep the secret, which includes an uptight older sister (Alison Brie), an eccentric, nerdy younger sister (Mary Holland) and parents (Victor Garber and Mary Steenburgen) obsessed with keeping up appearances. The couple soon feels the strain of keeping the secret, as well as the presence of Harper's ex-boyfriend (Jake McDormand) and ex-girlfriend (Aubrey Plaza). The film is funny and comforting in the way traditional holiday-themed romantic TV movies are. It makes use of this strong top-to-bottom cast, which also includes Schitt's Creek actor Dan Levy as a gay male confidante of Stewart's character. And Mary Holland, the actress best known for brief runs on Veep and Curb Your Enthusiasm, might be the least-famous person in the main cast, but her strange, nerdish energy makes her the movie's MVP.

It's a shame about the central couple, because Harper is, from what we see of her, a liar and an inattentive girlfriend, while Abby proves to have better chemistry with Plaza's character than with her own partner. Despite every last convention of the genre that’s pushing them together, I rooted for them to break up. But the main thing that doesn't work is the parents' attitude towards homosexuality, which doesn't feel like 2020. They're not bigots, nor are they particularly religious, and their supposed worry that having a lesbian daughter will hurt the father's political fortunes seems especially odd, 20 years after Dick Cheney was elected as a Republican vice president.

And in other December movies about festiveness, there's Another Round. There's that old Homer Simpson quote—"Alcohol: The cause of, and the solution to, all of life's problems," and I thought of it a lot while watching Another Round, a new Danish comedy/drama from Dogme 95 veteran Thomas Vinterberg, which is debuting this week on VOD. The film, whose Danish-language title Druk is more apropos, tells the story of a quartet of middle-aged men (Mads Mikkelsen, Thomas Bo Larsen, Lars Ranthe and Magnus Millang), all facing mid-life crises, who reach an agreement among themselves to collectively up their alcohol intake.

The four men, all of whom work as teachers at a high school, are inspired by a convenient bit of pseudoscience from the real-life Norwegian philosopher Finn Skårderud, who supposedly posited that humans' natural blood alcohol level is 0.50 too low, and that therefore they should strive to maintain that specific level at all times, even when teaching. The experience works out, at first, with the men all finding life considerably more enjoyable. But all eventually goes awry.

Vinterberg and the actors do a great job of making the storytelling work, through constantly shifting tones. Mikkelsen, the only one in the cast with any kind of American movie star profile, is the best in the movie, as a depressive whose life is stagnant, from the classroom to the bedroom. Another Round seems destined to occasion a shitty American remake, maybe even starring Adam Sandler and his usual coterie of pals. But the original is a winner that does a fantastic job conveying the joys—and ills—of an alcohol-dependent lifestyle.