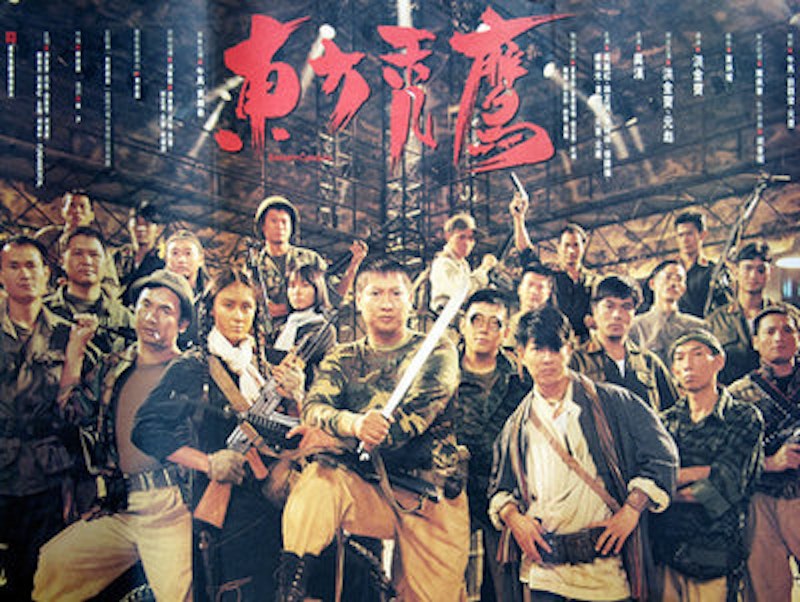 This is part of a series on latter-day U.S. colonial wars. The previous installment, on Jacob's Ladder, is here.

There are a wide variety of Vietnam films, from the bloody action romp of Rambo II, to the war-is-hell virtuoso set-pieces of Full Metal Jacket, to the anti-war satire of M.A.S.H. and the PTSD fever dream of Jacob's Ladder. But whether pro-war or anti-war, whether located on the home front or in the jungle, Vietnam films all have one thing in common—meaningfulness. Vietnam may be funny or sad, horrifying or exhilarating, but it's always about death, becoming a man, honoring veterans, or something. Even Rambo II, with its brains firmly lodged in its biceps, has Sly Stallone over-emoting in an excess of patriotism at its conclusion. Vietnam was traumatic; it was powerful. It meant something.

That's the Hollywood take. Hong Kong has a different perspective, judging from the 1987 martial arts schlockfest Eastern Condors. Vietnam in Eastern Condors is little more than a series of half-digested tropes, on top of which martial arts stars Sammo Hung, Yuen Biao, and Joyce Godenzi perform slow-motion stunts while bad guys and good get blown away in walls of machine gun fire. There’s no weighty theme; there’s barely a coherent plot. It’s just empty Vietnam tropes and violence. There's a seductive rhythm to the nonsense—a seductive rhythm so familiar that by the end you wonder if Hong Kong's Vietnam is really so much different from Hollywood's Vietnam.

The plot of Eastern Condors, such as it is, gears up shortly after the end of the war. Lieutenant Colonel Lam (Lam Ching-ying) is given a top-secret mission by the American military to destroy missiles left behind in Vietnam before the Viet Cong can get them. Lam recruits a group of Chinese-American servicemen who’ve been imprisoned, offering them freedom and $200,000 if they'll go on the mission (an idea probably lifted from Rambo II, which was released two years before.) The rag-tag band meets up in Vietnam with a group of female Cambodian guerillas, led by actress Joyce Godenzi. Along the way they meet a wastrel martial arts master named Weasel (Yuen Bao).  There's an inevitable prison scene where they're all tied up in waste deep water while evil Viet Cong children play games of Russian roulette using prisoners as targets (a sequence lifted from The Deer Hunter.)

In Vietnam films in the United States, race is an important subtext, or more than subtext. Film stars are all white; the Asian Vietnamese enemy is a shadowy, incomprehensible foe somewhere in the jungle. Buried racism give the films a frisson of anxiety and viciousness, as white actors do unto others, or are done unto by the others in turn.

This energy of racist nightmare isn’t found in Eastern Condors. Americans and the Viet Cong are played by Hong Kong actors, and there's a campy air of dress-up. The tone slips from hammy jocularity to melodramatic tragedy and back, with preposterously elaborate stunt work sandwiched in between.  One soldier is killed off early because his stutter prevents him from counting down properly to open his parachute—because stuttering is funny, get it? A sequence in which Sammo Hung uses two knives to climb a tree, turns himself upside down, and then drops on the enemy from above could be read as either a one-upping of First Blood's special forces woodcraft or a parody of it. Yuen Wah waltzes in at the end as an evil general, whose creepy giggling and martial arts powers make him more like a James Bond villain than a war picture adversary. A couple of soldiers sacrifice themselves nobly on a bridge for their compatriots in a scene so trite you almost expect them to break into snickers.

Perhaps the most characteristic, and ridiculous, sequence involves two brothers breaking out of the prison camp. The more sober brother is about to attack an opponent when he realizes it's just a child. He tells the kid to get lost—and the untrustworthy little monster stabs him in the stomach. The guy dies in his brother's arms, prompting his sibling—a hyperactive sort—to grieve loudly and spasmodically. As he tries to control his wails, his companions all repeat in unions, "Take it easy!" which is what his brother always told him. "He was more than just those words!" the surviving brother wails. Are you supposed to laugh here? Weep? The film doesn't seem to care either way.

Eastern Condors can indulge its fight and melodramatic death scenes with equal ease, because it fundamentally doesn't care about the Vietnam War. This is a film about frolicking around in someone else's trauma; it's not about the war so much as it's about films of the war. "What if we took an American war movie and added in a whole bunch of cool stunts?" is the question the movie is trying to answer. Its ambitions go no further.

The film is not intended to be a postmodern parody. And yet, that is where it ends up. The Dirty Dozen plot line, the climactic James Bond battle, the Vietnam prison camp—it's all so ridiculous sitting there under the slow motion high kicks and the ballet battle leaps that it's hard to look at the source material in quite the same way. For Eastern Condors, the Vietnam War is goofy fun times, some quick tear-jerking death scenes, and an excuse to blow stuff up. Does America really look at Vietnam any differently?

At the close, the over-carbonated brother—one of the last soldiers standing—screams that he hates America and its evil war. "So where do you want to go after this?" his companion says. "Back to America," the guy answers. For Hong Kong cinema, Vietnam as American self-loathing and Vietnam as bland American default patriotism sits side-by-side on the screen, devoid of any particular urgency or self-reflection.  There's no meaning here. The Vietnam War is just a show. Maybe Eastern Condors is more callous or distanced than its American counterparts. Or maybe it's just more honest.