The transcendent beauty of Little Red Riding Hood and Tom Thumb Meet the Monsters (1962) is accessible only when one abandons all notions of morality and common sense. 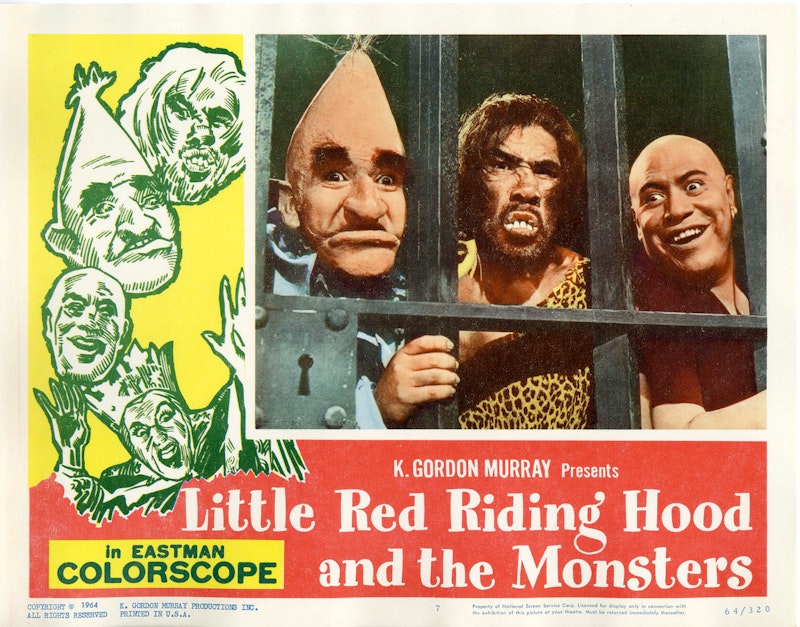 You’d think any filmmaker charged with the task of occupying young minds would keep it simple, avoid extreme characters and situations, and just try to create something that can be entertaining for your average mom, dad, and kids. That’s not always the case. Family-friendly cinema has its share of mutated embarrassments that are even weirder than many of the more celebrated B-grade films found in the horror, sci-fi, and exploitation genres. Mexican director Roberto Rodriguez’s 1962 film Little Red Riding Hood and Tom Thumb Meet The Monsters is an unforgettable attempt to pull light-hearted whimsy from the deepest recesses of a cracked id.

The first thing to ask before viewing this movie is, “Do I have an emotional attachment to logic?” If your answer is “yes” then don’t watch Little Red Riding Hood and Tom Thumb Meet The Monsters. There’s never a moment in this film that conforms to any clear version of logic. It looks, feels, and acts like a chunk of nonsense carefully designed to undermine good taste, continuity, communication and empathy. The only way to love the flick’s transcendent beauty would be to temporarily throw aside all preconceived notions you have about morality and common sense.

In a plot that could’ve been ripped from DC Comics’ "Tales Of The Bizarro World" Little Red Riding Hood villain The Big Bad Wolf and Tom Thumb nemesis The Ogre are on trial in The Devil’s Dominion for betraying The Queen Of Badness, the evil matriarch who put the hits out on the film’s title protagonists. The Wolf and The Ogre failed miserably as killers; they even ended up befriending the two characters they were supposed to murder. Upon discovery of these unrealized crimes, the monsters and witches of The Devil’s Dominion form a mob and kidnap The Wolf and The Ogre. What do they do once both villains are caught and chained up in Castle Badness? They all start singing bouncy off-key/Satanic choral music with sound quality so poor half the time you can’t even understand what the beasts croak out beneath the overdriven dissonance of canned orchestral accompaniment.

The rest of the film is mostly a string of “comedic” slapstick set pieces centering around Little Red Riding Hood, Tom Thumb, and The Big Bad Wolf’s best pal Stinky The Skunk as they journey through the bleak forests and caverns of The Devil’s Dominion to free their enemies-turned-friends and uphold all that’s humane and decent. Terms like “decent” and “humane” are entirely subjective in this upside-down imaginary world. Each scene becomes progressively crueler, psychologically menacing, and scatological the closer these spazzed-out child actors get to their date with fairy tale destiny.

The sets and costumes for Little Red are modest, but production designer Roberto Silva did an incredible job of creating a magical playland with few resources other than an expansive soundstage, glitter, cheap fireworks, and detailed fake forests and cavern-scapes that were probably left over from whatever big budget feature had been utilizing the studio before Rodriguez and co. began their absurd effort. The special effects and monster make-up occasionally looks faker than anything else, but that only complements the overarching anti-realism of the movie. Even the special audio effects ooze chintz; the Stinky The Skunk character (frantically portrayed by Santonon) babbles with an overdubbed/pitch-shifted voice that sounds like a toothless meth-head on helium.

The film reaches a fever pitch when The Ogre and The Big Bad Wolf get into a shouting match and start spitting at each other non-stop shortly before they face execution chained down beneath a spinning razor wheel. We’re not talking about little tiny droplets of spit; these are giant gushers of saliva blasting forth with garden hose intensity. Around the same time, Little Red and co. are suddenly attacked by a gang of monsters who look like big hairy pro-wrestlers in rubber masks and spandex. Despite outweighed by several hundred pounds, the kids make short work of the ghoulish meatheads. Little Red (Maria Garcia) pins one fiend down in the dirt and starts ripping off handfuls of his chest hair. What follows is something else. Let’s just say this shocking act sends all of her “cute” little pals into fits of sadistic laughter.