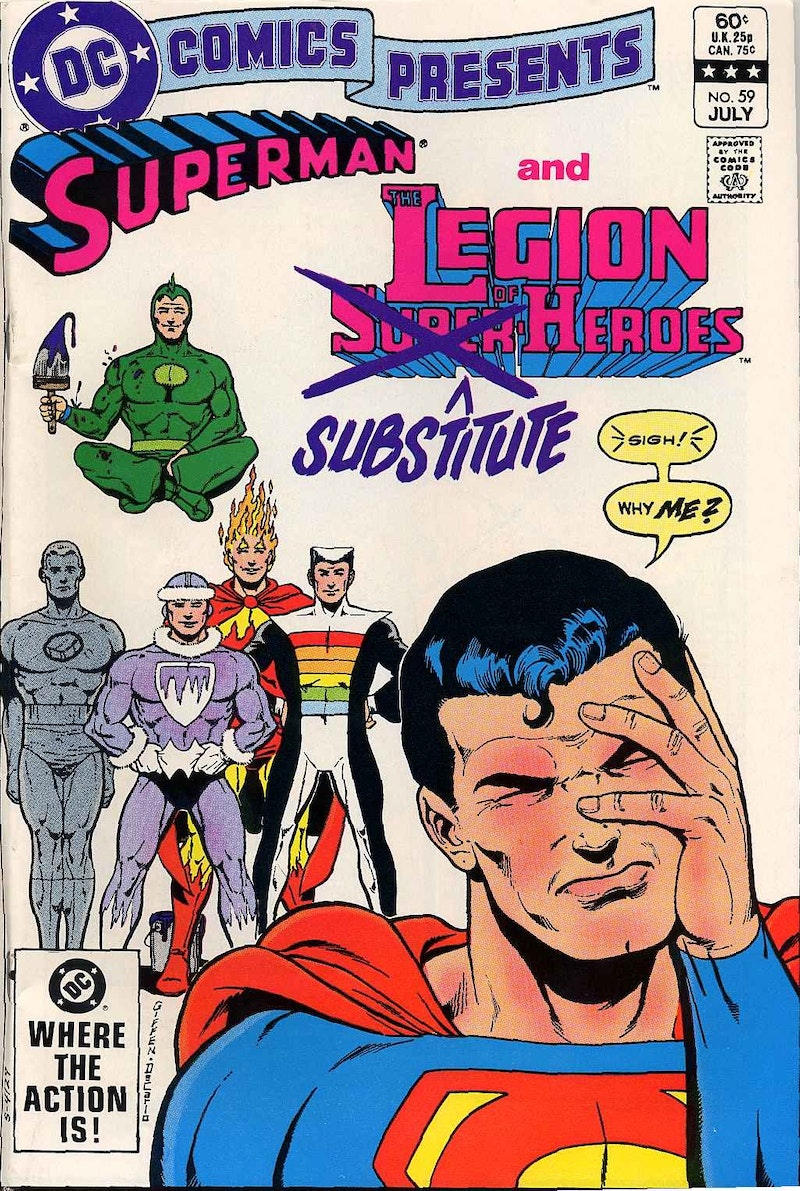 The worldwide obsession with Superman has always baffled me. His aerodynamic haircut, stoic demeanor, inevitable victories, it’s boring! Even his Clark Kent alter ego is nothing more than the dull stereotype of a white-collar dork. The clichés that made American comic books lowbrow fare for children were established in the earliest Superman stories. The best Superman tales have used Rabelaisian mayhem to contrast the character’s iconic blandness.

DC Comics Presents no. 59: From dense sci-fi to to experimental art comics to twisted takes on every famous comic book character you can think of, Keith Giffen has done it all. The artist rendered two of the most subversive Superman stories. The first was published in the July 1983 issue of DC Comics Presents. Written and drawn by Giffen (with ink finishes by Kurt Schaffenberger and additional dialogue from Paul Levitz), “Ambush Bug II or… Just When You Thought It Was Safe to Start Reading DC Comics Presents Again” finds Krypton’s favorite expat teamed with the frumpy Legion Of Substitute Heroes. This amateurish bunch served as an unofficial auxiliary unit for The Legion Of Super Heroes.

With awkward “help” from Substitute Legionnaires like Stone Boy, Porcupine Pete, Antennae Lad, and Infectious Lass, the Man Of Steel can barely keep composure while trying to retrieve his stolen cape from the clutches of villainous prankster The Ambush Bug.

Action Comics no. 579: Asterix was the name of a humorous Gaul character, the eponymous star of a Belgian graphic novel series about an ancient village populated by people with super powers. Since the Asterix characters were owned by Les Editions Dargaud, none of them could legally be mentioned when the May 1986 issue of DC’s Action Comics ran “Prisoners Of Time! (1986 to CCLIII A.D.)”. This was a strange collaboration by Giffen (pencils), Bob Oksner (inks), and writers Randy & Jean Marc Lofficier. The warrior Asterix and his friends appeared under pseudonyms in this folkloric yarn that also starred Superman and his Jimmy Olsen.

The Lofficiers were two of the 1980s’ best comic writers and their appropriation of Superman is a surprising detour into gentle absurdity more akin to the Asterix books than any biting American satire. Superman’s appearances here are inventive sight gags presenting the character as a zombified prop utilized in a slapstick war of magic.

Adventure Comics no. 293: Original Superman writer Jerry Siegel and artists John Forte and Wayne Boring created the 1960s series “Tales Of The Bizarro World” which ran in Adventure Comics and starred Bizarro Superman, better known as Bizarro No. 1. Each of these stories opened with a rundown on the alien troublemaker’s backstory: “Far off in outer space exists the weirdest, zaniest planet in the entire universe… The square Bizarro World! It is the home of the stupid pathetic Bizarro creatures who are imperfect duplicates of Superman and his friends.” The grammatically challenged Bizarros had their own moral code: “Us do the opposite of all Earthly things! Us hate beauty! Us love ugliness! Is big crime to make anything perfect on Bizarro World!”

In the February 1962 issue of Adventure Bizarro No. 1 becomes entangled with “The Good Deeds Of Bizarro Luthor,” the jovial conscientious counterpart of Superman’s arch nemesis Lex Luthor. After committing a crime of perfection, Bizarro No. 1 can only avoid punishment by helping Bizarro Luthor with some earthly community improvement projects. These good deeds fall hilariously flat. In the biggest gaffe, Bizarro No.1 leads a group of his fellow aliens in carving an honorary bust of Superman and Clark Kent onto a mountainside. Underneath it he inscribes giant text reading, ”CLERK KENT AM SECRUT IDENTITEE UV SOUPERMANN.” This scruffy and klutzy version of good will represents the disparity between the ever-graceful Man Of Steel and the Bizarros. Their sculpture’s placement within a Mount Rushmore-esque context is a celebration of Superman’s cultural significance as a sacred cow ripe for slaughter at the hands of contrarian provocateurs.