Kajillionaire (C-) and Antebellum (C) are both middling and uninteresting efforts from talented filmmakers. 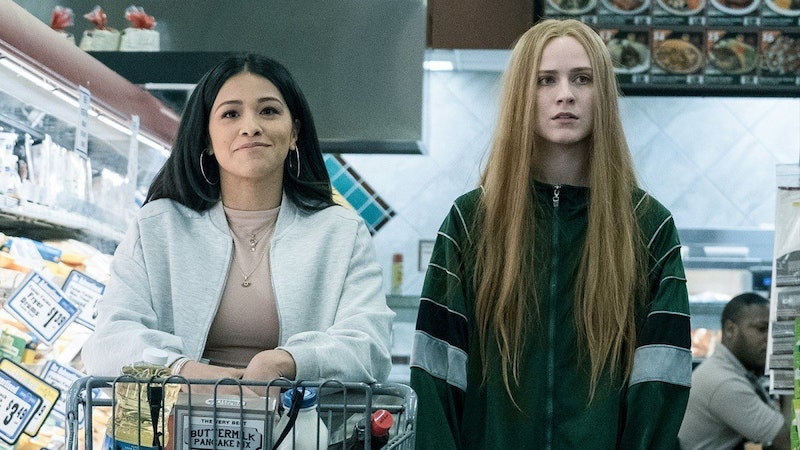 Following her 2011 follow-up, The Future, July is back with Kajillionaire, a film that's just as weird as Me and You, but not weird in as nearly interesting a way. It’s a movie that’s buried under layers of quirks. Kajillionaire is another film about a family of struggling, small-time con artists, who specialize in minor postal fraud. The family is called the Dynes, and Richard Jenkins and Debra Winger are the parents. Evan Rachel Wood—playing mid-20s, despite being 33 years old—is their daughter. In one of those details that could only happen in a movie like this, they live in a building next to a bubble factory, meaning that pink bubbles occasionally materialize in their home. The fourth major character is Melanie (Gina Rodriguez), a fellow scammer who joins the trio in a new grift, and brings about a long-overdue reckoning for the family.

There's a lot that goes wrong here, from the butt-ugly color scheme to the waste of several talented actors. But the worst thing about Kajillionaire is that there's no behavior in this movie that's the slightest bit recognizable with how actual humans talk and act. Wood's character, whose name for some reason is "Old Dolio," speaks for the entire movie in a deep monotone. The main thrust of the plot is that Old Dolio is beginning to awaken to the realization that there was something wrong with the small-time criminal milieu in which she was raised ("She learned to forge before she learned to write," her father says at one point).

I can understand the potential appeal of a "heist" movie in which the thieves are lower-class small-timers, although Steven Soderbergh pulled that off in a much more convincing fashion a few years ago with Logan Lucky (another Soderbergh heist movie, Ocean's Eleven, is name-checked in Kajillionaire.) But Kajillionaire doesn't follow through, or end up in a place that's particularly interesting.

It's a shame that this movie wastes such a cast of performers. Evan Rachel Wood is nearly always a welcome presence on screen, while Richard Jenkins is normally versatile enough that he fits into even the strangest material. Debra Winger has a major movie role about once a decade—the last was as Anne Hathaway's mother in 2008's great Rachel Getting Married—and great as it is to see her, she doesn't give a memorable performance.

Speaking of movies that took a big, big swing, and just plain missed, there's Antebellum, which landed last week as a premium VOD release. The film's audacity, to some degree, is admirable, even though it comes up empty. Antebellum, directed by the duo of Gerard Bush and Christopher Renz, represents a hash of 12 Years a Slave and M. Night Shyamalan's The Village. Come for the brutal treatment of slavery, and stay for the “mind-blowing” plot twists.

Antebellum appears to be set in the antebellum-era South, and in the present day. Actress/singer Janelle Monae, in the Civil War scenes, is a slave, suffering torture and rape. In the present, she's a popular, wealthy author. How the movie's two halves fit together I won’t reveal, except to say that it's done in just about the most insulting, tasteless way imaginable. The terrible things we see onscreen, once we find out what's "really" going on, feel unearned.

The film looks great, has a killer score by the team of Nate Wonder and Roman Gianarthur, and boasts an amusing small supporting performance from Precious veteran Gabourey Sidibe. But it can't make up for a project that's ill-conceived from the jump. For all of its Shyamalan influence, Antebellum feels like a knockoff of what Jordan Peele's done with Get Out and Us, in combining horror and genre elements with razor-sharp racial satire.