Thoughts on the 1980 comedy classic. 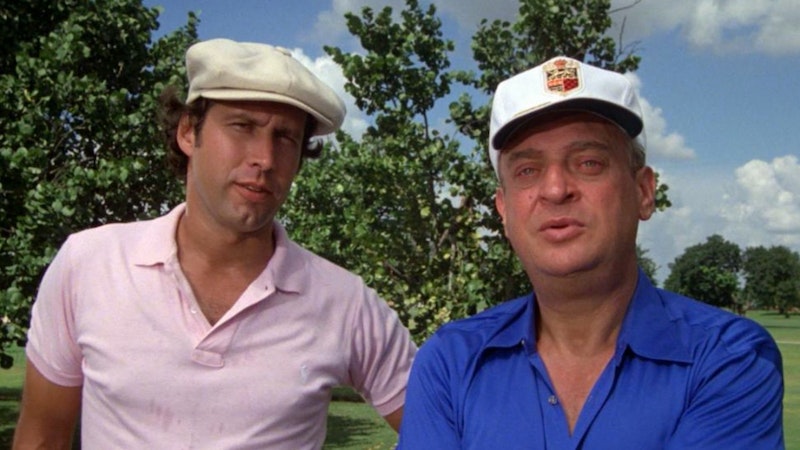 I don’t like Caddyshack. Noisy and glaring, always flat and never quiet, this bad movie hangs furniture and comedy stars in the same brightly-lit dimness, with the comedy stars agitating their limbs and popping their eyes to let us know that funniness is going on. For whatever reason, it all makes me feel like I’m in a parking garage. And Bill Murray’s Honker voice, the mush-mouthed delivery he uses for his renowned wino-moron-groundskeeper character, starts sounding like babytalk real fast.

“For them, alcohol, marijuana, and especially cocaine had been the diet of choice during the film’s wild eleven week shoot in Florida, back when director Harold Ramis, producer Doug Kenney, and the pair’s writing partner, Brian Doyle-Murray, still believed they were making another National Lampoon’s Animal House.” Books about show biz tend to sound bright and amused. Here we have a quote from Caddyshack: The Making of a Hollywood Cinderella Story by Chris Nashawaty, an Entertainment Weekly veteran who’s just fine at being bright and amused. “Dorm of debauchery” is his description of the cast’s living quarters, and “began his long affair with cocaine” describes someone becoming an addict.

Nashawaty talked to a lot of people and bundled their revelations into a fast-moving book. But I don’t buy the bright-and-amused tint. Take it off and the making of Caddyshack seems like something to be regretted. It’s too bad the people in charge were fucked up on drugs and ego and thought they could wing it all. It’s too bad everyone failed and too bad that lying and cheating went on so their folly could get made—too bad that a country club’s lawn was blown up, too bad the club’s responsible parties were lied to, too bad a young woman had a Playboy photographer sprung on her, too bad she was threatened with career death because she objected. Going back to the drugs, it’s too bad Doug Kenney blew out his personality on cocaine and then staggered off a cliff while shrooming.

Kenney, the mastermind behind Animal House and National Lampoon, reacted with shame when a press audience gave Caddyshack a tepid reception. All his adult life the clever bad boy had celebrated jizz, tits, wiseassery, and the defiantly scabrous. In return he’d been made rich and powerful, but now he thought his string was finished. He responded like a child who’d been caught. At a press reception the morning after the bad showing: “Yeah, it sucked!! Didn’t everyone think it was terrible?!” Upon shouting this, Kenney “stood up and told everyone in the club to go fuck themselves” and then slumped down and dropped his head on the table. His parents (this is all from Nashawaty) “walked over to their son and hugged him before leading him out of the room.” The rebel’s parents had to lead him away.

Harold Ramis, director of Caddyshack, came through all right. Looking back, he felt his movie was rather like the Marx Brothers, what with high society being disrupted by aggressive high-jinks, Rodney Dangerfield having a motormouth similar to Groucho’s, and Bill Murray horsing around in a deranged primitive-child fashion similar to Harpo’s. Well, all right, I suppose. Caddyshack, like a Marx Brothers movie, does set everything second to the doings of a comedy squad, and in Marx fashion the members of the team are wildly different from one another. On the other hand, Murray talks and Harpo doesn’t, and where are Chico and Zeppo? Chevy Chase might be Zeppo, but not really. Zeppo was always hemmed in and compelled to serve as straight man, whereas the Caddyshack Chase is given potentially funny things to do but is too tired and inert to oblige. Ted Knight would appear to be Margaret Dumont or (to go non-Marx) Edgar Kennedy.

Personally I think the Caddyshack-era Ramis sounds like Hoover from Animal House, Hoover being the smiling and beleaguered straw boss who served as president of Delta Tau. Not knowing that much about directing back then, Ramis presided over a raging mess and acted like he didn’t mind. The parallel raises a French sort of thought. Consider this: Having imagined their ideal community, the creators of Animal House materialized it on the earth’s surface as the Caddyshack shoot. All those dick-proud, turbulent baby boomers set loose in Florida, with Dean Wormer (I mean the studio) far away in Los Angeles. The young bucks in charge were issued with money, personnel, and equipment, and they used it to create a mini-crater of filmmaking; it goes with the giant crater that boomers would make of the Middle East after expanding their reach from movie production to national policy.

A decent movie could’ve been made; instead there’s this splat, this expanse of dog-doo. It may have streaks that interest bored wannabe smart guys but that’s because much of the population has spent the past 40 years in front of cable TV. Human passions attach like lint to whatever the screen presents, so now Caddyshack has a cult following, like any dumb thing. Yeah, it’s too bad.