The 1985 John Landis film Into the Night and Orson Welles' "private" opinion of the man. 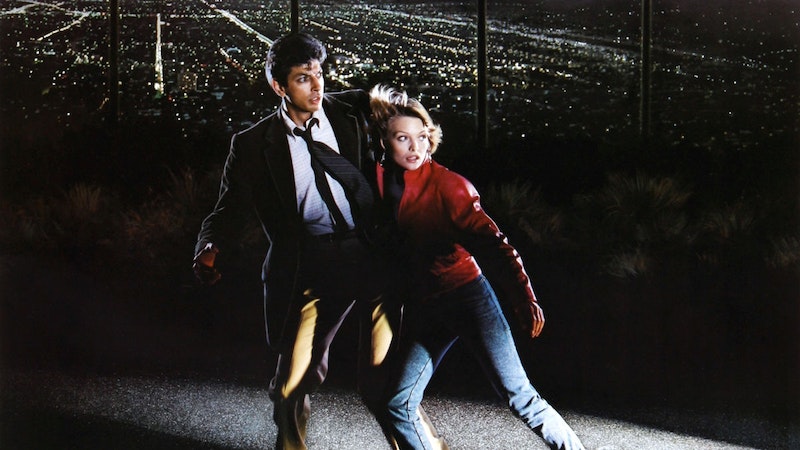 Jeff Goldblum is Ed and Orson Welles famously wanted the director of this movie dead. But first, the theme song: a swaying B.B. King, outing Boz Scaggs as his bootlicker. Between this, and Michelle Pfeiffer, you can’t ask for more electricity. This is good, because Ed is rather static. He hasn’t had a proper night sleep since 1980 and his wife is doing weird insipid shit like patting him on the head and telling him to “have a nice day.” What we’ve come to expect from Goldblum (a debonair freak) is totally neutered here, but he’s convincing, making us believe that his wife would cheat on him as he maneuvers a Toyota Corolla into the night. Suddenly, Pfeiffer, on the run from thugs, lands on his hood and the real caper (involving precious stones) begins.

Ed’s life is so dreary that at one point he asks a man who’s taken Pfeiffer hostage at gunpoint: “What happened to my life?” The killer, instead of answering him, turns the gun on himself. Will Ed get a good night sleep? It’s a wonderfully simple premise, and fitting, especially given Pfeiffer’s stupefying presence. Every dimension of her character glitters strange, brilliant, and whole. She’s a diamond.

In some ways, the movie resembles Something Wild and After Hours, two of the decade’s most insouciant masterpieces. Great quirky cast here, too: David Bowie, David Cronenberg, Jonathan Demme, Roger Vadim, Carl Motherfucking Perkins, and Vera Motherfucking Miles. Using swarthy men as thugs is dubious, but by casting himself among them, director John Landis evens the playing field a bit. Plus, there’s a scene of him using the butt of his pistol to smash a cookie so he can share with the others.

John Landis: purveyor of moral decrepitude, weasel of fine, frivolous entertainment. In Henry Jaglom’s book My Lunches with Orson, Welles reveals his feelings for the guy: Landis, on the day of his indictment for getting Vic Morrow decapitated on the set of the Twilight Zone movie, and now working as producer on a Welles picture that never got made, had the audacity to send Welles patronizing script suggestions! Welles found this behavior low even by Hollywood standards. “He’s a person I can influence,” Henry Jaglom says. Welles: “Kill him.”