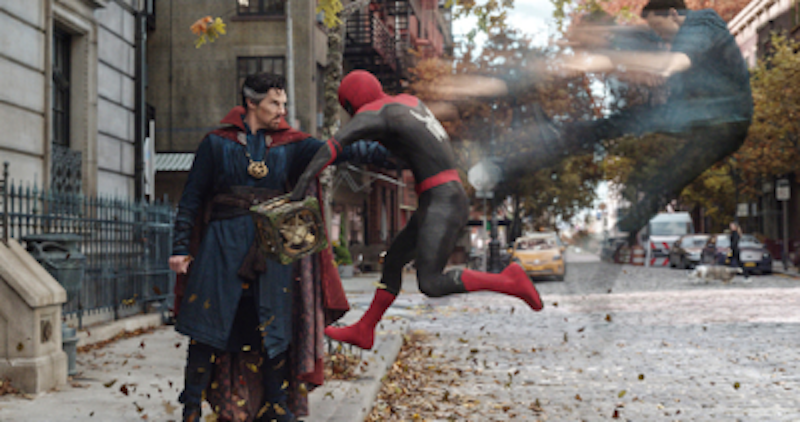 Linguists understand better than most people that change isn’t random. When pronunciations, for instance, change over time, they drift in predictable directions. Certain sounds tend to get dropped or abbreviated more than others within a given language, mainly for ease. Similarly, you can sort of guess which story elements will survive the next reformulation of a canonical body of work, or nowadays reboot of a franchise. Membership of the court at Camelot may change, but King Arthur will always pull a sword from a stone and/or receive one from a lake at some point in the story. Hercules’ parentage may be unclear, but he’ll always be strong.

The weird thing about our era—well, one weird thing—is that this process has become both so rapid and so self-conscious that every fictional franchise, no matter how ostensibly naturalistic, risks becoming postmodernist literature of the sort in which the characters walk around talking in a self-aware fashion about being characters. It’s happening to superheroes, for example, even faster than I’d have predicted. Young audiences accustomed to hitting restart or customizing characters’ skins in videogames may be hastening the process.

In the original comics, decades passed between the first stories to broach the idea of parallel universes (circa World War II but more prominently from the 1960s onward) and stories today in which characters routinely break the fourth wall or explicitly have memory problems caused by their frequent rewrites (with the DC Comics print universe in particular now descending into an unsettling, almost Philip K. Dick-like hell in which civilian characters literally share conspiracy theories about why there are multiple contradictory versions of Superman and his ilk walking around on the same Earth at the same time; the citizens of Metropolis are going to need a lot of therapy).

Just as awkward strings of consonants get shortened in language evolution, sci-fi and superhero franchises are rapidly doing away with the need to go through big rituals before having, say, three different versions of Spider-Man and their most vividly-remembered foes meet up in the same film (as they will in this year’s Spider-Man: No Way Home, with the long-dreaded villain team the Sinister Six most likely formed on screen at last by the time-saving trick of yanking two memorable villains from each of the three versions of the franchise: Dr. Octopus and Green Goblin from Toby Maguire’s universe, Lizard and Electro from Andrew Garfield’s universe, and probably Vulture and Mysterio from Tom Holland’s MCU).

Why build a big plot around inventing a time machine that produces variant timelines or even have Justice League members get into transport booths to visit their World War II-era counterparts on another Earth if you can just have a character cast a spell that brings together audiences’ favorite bits? Marvel at least still feels the need to cast a spell. In DC Comics print stories, we’ve reached the point where, like Douglas Adams’ quantum-comedic story idea called the Whole General Sort Of Mish-Mash, the bits and pieces of different continuities are just there all the time, ripe for the plucking for new storytelling purposes.

It’s convenient for writers, editors, and casual fans who don’t much care about logic, but it’s infuriating chaos for nerds like me who remember a time—peaking around the 1980s—when fans cared enough about consistency to put pressure on writers to avoid continuity errors and keep canon intact. I’d still prefer that, but a perfect storm—characterized by red skies, lightning, and antimatter—of market, political, and psychological forces will now probably batter the last bits of continuity into oblivion, leaving a mush that’ll be praised for its fluidity instead of condemned for its artistic indecision.

Plainly, there’s a huge ongoing push to make the straight white male ranks of superhero-type characters more diverse, fictional history be damned. That’s much easier to do if reality does a big switcheroo without fanfare every alternate Tuesday anyway. Who’s to say the black Superman from Earth-23 hasn’t always been in the Justice League?

With the third Robin out of four or so Batman sidekicks to use that moniker having just come out as bisexual and the original Robin, Dick Grayson, turning into some sort of socialist, for example, the very vocal minority of left-wing fans and creators, craving constant validation, will increasingly argue that not only is all this stuff fiction anyway, it’s also all in perpetual cosmic flux, all malleable, so why not give them the versions of characters they want right now, on demand, always? Multiculturalism via multiversalism, as it were. It’s partly just a function of increasingly responsive markets and heightened, social-media-era contact and feedback between fans and creators—though the left constantly exaggerates the extent to which its own desires reflect those of most of the buying public, as frequent post-reinvention cancelations and bankruptcies show.

Add to all this the craving on the part of some very weird comic book writers to transform their childhood heroes into avatars of trendy political salvation and you get some blurring of the lines not only between fictional realities but between those fictional worlds and our real one. Tom King, a prominent DC Comics writer who used to be a CIA agent—and prides himself on the ability to spot radicalization in the field in places like the Middle East—just days ago tweeted with pride that he had sworn at a fan at a convention and then had him thrown out because the fan, dressed as the character Rorschach from the Watchmen (whose adventures King is currently writing), removed his mask, which was a violation of the convention’s very strict COVID protocols.

In the original Watchmen series, poor Rorschach gets blasted by the nigh-omnipotent Dr. Manhattan for what cold and calculating Manhattan perceives as the greater good, while moralistic but crazy Rorschach shouts in vain, “Never compromise! Not even in the face of Armageddon! That’s always been the difference between us!” Rorschach in that story was written with real sympathy by left-anarchist Alan Moore, based on an earlier character written by libertarian Steve Ditko, and Rorschach was depicted as one of the few people with the guts to violate a government edict against wearing masks. Now, in real life, Rorschach’s written by an uptight left-wing former CIA agent who throws real Rorschach-masked people out of conventions for violating rules mandating the wearing of masks (and King probably relished doing so in part because right-wingers are prone to like Rorschach much more than the writers who control him do).

This sort of authoritarian drift will inevitably be reflected in the coming wave of superhero stories, with attendant rewrites of the characters’ histories. The mounting assumption that it all happens within a cosmically unmoored, warping reality anyway will only make the whole process more rapid, slapdash and subject to shifting political winds, like the Orwellian forgetting of history and shifting radicalization of language rules.

Presciently, in 1986, before things had gotten this nuts, DC Comics depicted one terrified character in an insane asylum named Psycho-Pirate who was at that time the only person aware how radically reality was rewritten around our heroes, not by godlike villains on the printed page but by tinkering editors in the real world. It was just a cool, isolated story moment back then, but I suspect many people like me increasingly feel it’s Psycho-Pirate’s world now and we just live in it.