Salon Kitty and the allure of a corrupt Nazi. 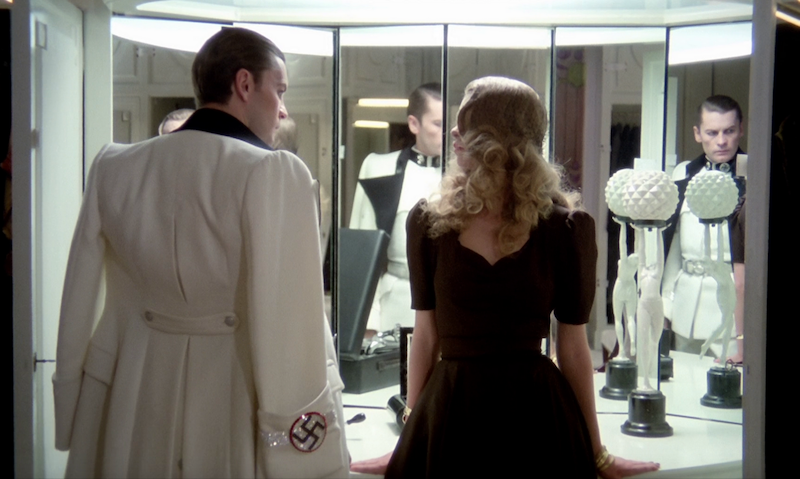 This is part of a series on fascism in film. The previous entry, on Dirty Harry, is here.

Salon Kitty's fascination with sex is spectacular and, deliberately, hard to ignore. But Brass' real subject of interest is not sex. Sex is simply a means to an end. What really excites Brass is corruption.

"Salon Kitty" is the name of a brothel, which, in the film, served many Nazi party officials before World War II. As the war starts, flamboyantly evil Nazi official Helmut Wallenberg (Helmut Berger) hatches a plot to appropriate the brothel and its madam Kitty Kellerman (Ingrid Thulin) for espionage purposes. He fires the multiracial, sexually ambiguous prostitutes, and instead recruits pure, ideologically committed, National Socialist women from throughout Germany. The Nazi women are then commanded to fuck for the Fuhrer. As Helmut tells his subordinates repeatedly, "Have fun."

The sadistic frisson of the film is the thrill of defilement. The viewer is encouraged to watch with lascivious appreciation and disgust; in one scene, Helmut walks down a hallway, looking into cell after cell. The camera zooms in to a close-up of his eyes, gazing, and then shows the National Socialist women performing various sex acts. Some scream, and are obviously being raped; he calmly rejects those. Others are at least simulating enjoyment; those he praises. Either way, he, and you, get to watch as superior, idealistic women of Nazism are literally stripped of their dignity, violated, and brought low.

It isn't just sex which corrupts Nazis; it's Nazis who corrupt sex. Kitty's open sensuality and embrace of sex for profit is presented, at least to some degree, as honest. The film opens with Kitty, dressed in half drag in a suit/dress that splits her down the middle, performing a sensual dance and song for the jaded brothel patrons. The camp spectacle is an extravaganza of impurity, as male/female Kitty flirts with men and women alike. That brazen unrespectability is diluted and twisted by Nazi idealism. Amorality is twisted to the fascist's idealistic purposes. Kitty bursts into tears when she realizes that Helmut has turned her brothel into a spy ring. Nazi cleanliness defiles good clean dirty sex.

The Nazi defilement here, though, isn't of just any brothel; it's of a Nazi brothel. Kitty is horrified that Helmut is spying on other Nazis, including very highly placed ones. Helmut uses his wiretapping to catch a Nazi pilot who plans to defect. But mostly he's gathering dirt on his highly-placed rivals. Kitty herself appears to be friends with Hitler, Goring, and the rest of the Nazi high command. Why are we supposed to be on her side, and theirs, rather than on Helmut's? Because he dresses like a villain, complete with cape and leather pants, through which the heroine manipulates him to orgasm in the film's S&M sexual finale?

If Helmut is the evil moustache-twirling villain, Margherita (Teresa Ann Savoy), is the noble heroine who defies him. Margherita was initially a young idealistic National Socialist, estranged from her corrupt, wealthy parents. Enrolled as a spy/prostitute in Helmut's scheme, she falls in love with that traitorous soldier. He speaks to her of his weariness of war, and she begins to question the wisdom of the party.

After Helmut has her lover killed, Margherita uses the seductive wiles she’s learned in the brothel, manipulating him right through those leather pants. She tricks Helmut into revealing that his wife's grandfather was Jewish, and admitting that he’s using the brothel to gather dirt on his rivals and advance his career. After Margherita delivers this compromising information to Helmut's subordinate, the subordinate executes the evil officer while he’s nude in the bathhouse. Happy ending! The bad Nazi is gone; the good Nazis can get on with the business of paying for sex in peace (though maybe not at Kitty's, since it's destroyed by an air raid at the credits.)

Corruption is a tried and true way to organize political drama on cinema. It's ubiquitous in American films, from Mr. Smith Goes to Washington though All the President's Men. Politics, in these movies, is a battle between those who would use the mechanisms of power for personal advancement, and those who want to preserve the system and its ideals. It's a narrative that allows for political conflict without the messiness of political ideology. In corruption narratives, politics isn't about completing political visions. It's about the good of the many being undermined by the personal ambition of some villain.

Salon Kitty could be seen as a kind of camp parody or satire, mocking the idea of political purity. A shocking scene early on shows a Nazi doctor discussing the racial differences in corpses as an audience of good National Socialists watches. The doctor points to the dead body of a black man as an inferior specimen; then he unveils an Aryan prostitute who died from complications with abortion. The doctor blithely chatters on about the women's eugenic perfection as he stands over her corpse. The political ideal is always already dead, mutilated, and disgusting. Shots of a fetus floating in a jar drive home the sacrilege for the audience in Brass' Catholic Italy.

But if Brass is pissing on the idea of political corruption, he's also titillated by it. The film shows a Nazi woman crushing a Jewish child's toy beneath her foot, but otherwise there's little discussion of Nazi racial politics or the Holocaust. The criticism of the wastefulness and violence of the Nazi war effort could as easily be made of World War I; it's resolutely unspecific. Instead, politics is overwhelmed by the pleasing, stimulating mechanisms of melodrama. The villainous ravisher of women, the sadistic sexual deviant, is brought to justice. Honor is restored.

Corruption narratives are fun. As Salon Kitty is aware, debasement has a sexual edge. It's exciting to see the good corrupted; it's satisfying to crush the evil in your hand. There's a powerful incentive to turn moral questions into a stimulating tale of dominance, submission and power. That's what Hitler's regime did, with its stories of Jewish outrages on German womanhood and volk triumphant.