Posterized: Michael B. Jordan in Tom Clancy's Without Remorse 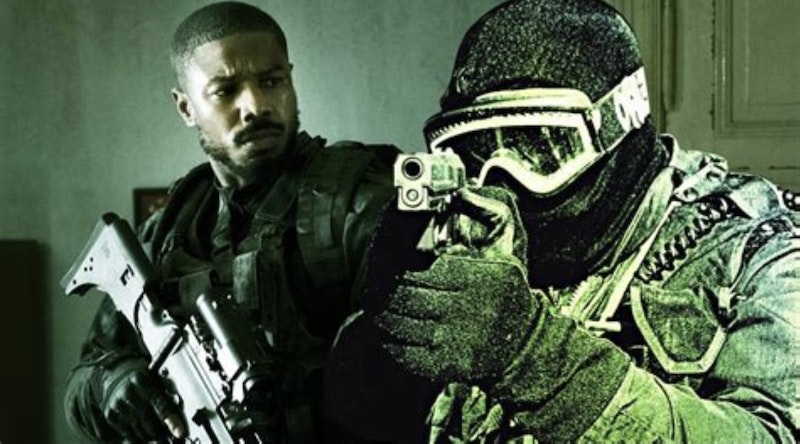 It's the most formulaic formula imaginable. He's a special forces superman. "They" kill his family, but they done fucked with the wrong motherfucker this time, for they've released a heroic, moral, extremely muscular man to kill everybody within reach, while undergoing various audience-affecting wounds. In Without Remorse, Michael B. Jordan plays Liam Neeson playing nothing on God's green earth.

As is often the case, the production team spent a hundred mil or whatever for catering on the set, but couldn't afford $27.99 for a decent script. Or maybe they dropped another hundred mil there, but the problem is that people making the movie (starting with director Stefano Sollima), can’t themselves distinguish good from terrible writing, so they've got no idea who to hire or how to think about what they've got. They may, incredible though it seems, have been laboring under the delusion that the dialogue in which they directed Jordan is plausible or interesting.

In fact, Jordan spends most of the movie merely grunting, screwing up his face in pain, and flexing his protein-shake physique, as a real action hero does. He's a rudimentary he-man in the throwback action-hero mode: barely linguistic, like the scriptwriters. We're meant to be affected by the death of his pregnant wife, but the relationship is sketched in the most perfunctory terms. Well, we know and the director knows that the point is to get through that bit as quickly as possible so we can release Jordan's John Kelly to his killing spree.

Perhaps Michael B. Jordan could be a fine action hero, say a black Tom Cruise. It'll be hard to tell until he gets a decent director or a semi-plausible story line. (Here, the Secretary of Defense and the director of the CIA decide that America needs an enemy, and so sponsor a series of deadly domestic attacks by Russian terrorists.)

The action sequences are directed without any wit or style: just piles of bullet-ridden corpses in smoke-filled concrete basements and more groaning. It's like they haven't seen any action movies for the last 20 years. As ridiculous as the Bourne films are, for example, the roller-coaster chases are stylish and fun. Here, it's just a man with a head like a concrete block shooting people as he grimaces.

Boldly, the film race-reverses the Tom Clancy novel. But it manages to do nothing with that either, except issue a few stray remarks to the effect that "It seems ironic to fight for a country in which we're invisible." Then it's right back to the corpse-piling. Clancy's novels were gross, if you ask me: jingoistic celebrations of militaristic violence, implausible portrayals of patriotism as requiring superhuman killers. But Clancy was a better writer than whoever drafted or fixed this script, who don't manage to rise to his level of grinding mediocrity.

Maybe this is a moment in which you can sell anything big on the small screen, in which gigantic Godzillas and Michael B. Jordans battle it out with the bad breath of death for inarticulate macho supremacy. Next phase please.