Bogarde closed out his career with the wonderful Daddy Nostalgia (1991), directed by Bertrand Tavernier. 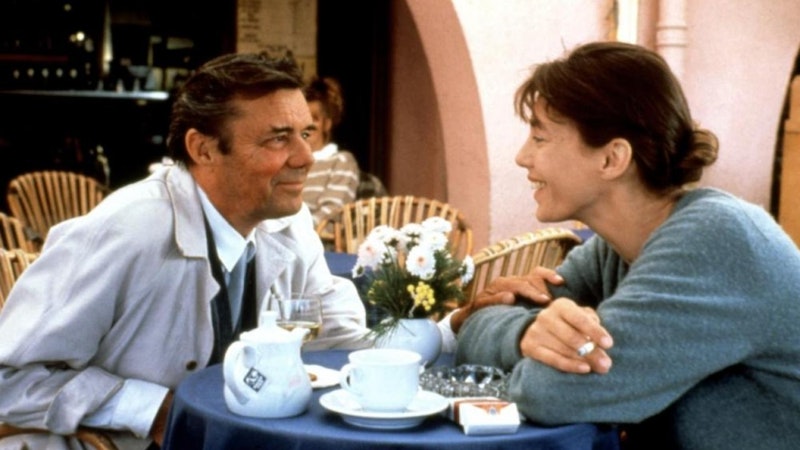 Dirk Bogarde’s final film, Daddy Nostalgia (dir. Bertrand Tavernier, 1990), is the story of a relationship between a father and daughter. Bogarde plays Tony, a dying man who’s lived a full life in terms of his career but his role as a father has been incomplete and inadequate. After Tony’s surgery, his daughter, Caroline (Jane Birkin), leaves Paris to stay with Tony and her mother, Miche (Odette Laure), on the French Riviera.

Caroline loves her father but it’s obvious that their relationship hasn’t been easy. Through a series of quick and subtle flashbacks of Caroline as a little girl, we find out that Tony continuously neglected his daughter, and instead focused on either his wife, Miche, or his bustling social life. Now that his health is in jeopardy, he finds himself reflecting on his life. Caroline’s mere presence is a reminder of what he could’ve been as a father, and he struggles to show regret and apology, despite the fact that he feels both.

Birkin’s Caroline is at times angry but the depth of ambiguities of one family’s dynamic as well as her interior life take precedence over the simplistic notion of conflict, resolution, and emotional closure. Tavernier’s approach is subtle. Bogarde and Birkin are a perfect match in this case because they both reveal the hidden emotions with mere gestures and facial expressions. Sentences are often left unsaid. In the midst of tension, which has built up for decades, Tony’s unable to speak up. He’s emotionally paralyzed, yet he’s hardly a monster. The self-importance of his youth and middle age has vanished, and we see a man quietly wondering what his life was all about.

As Tony’s is trying to recover from his surgery, Miche is making sure that he eats healthy food, and more than anything, that he doesn’t smoke or drink. But what is the point, Tony wonders, if death is inevitable. The thought of dying becomes more apparent as one becomes a parent, but especially when one gets older. Mortality is always on the horizon.

Miche doesn’t share Tony’s attempts to recover the verve of life he’d known in his younger days. She’s judgmental—whether at his irreligiosity (she’s a devout Catholic) or irresponsible post-surgery self-care. In some strange way, through her roughness, Miche is trying to deal with Tony’s imminent death. She’s grasping to save him, and the only way she can express this is through anger and irritation. Suddenly, little and meaningless things about Tony that bother Miche become a cause for emotional separation.

Despite Caroline’s dissatisfaction with her father, she chooses him over her mother. She uses the situation to her advantage, and like a little girl going after a father’s affection, she further pits her mother and father against each other. Knowing that Tony shouldn’t drink, she indulges in occasional whiskey and wine; she goes out for walks with him despite the fact that he shouldn’t exert himself. Tony wants to feel alive again but the responsibility of things past is knocking on the door.

During the visit, Caroline assumes a role of a child again. She falls into the similar, if not the same, dynamics that she knew as a girl. At the same time, both Tony and Miche are becoming more like children in their attempts to grasp and hold onto their lives. They pout and yell, all while they’re dealing with physical frailties. Is this the end, they wonder? Can we begin again but, if we do, what would this beginning look like? Have we accomplished what we set out to do? What if our accomplishments can’t be measured, and those that can, have nothing to do with relationships that we’ve cultivated or neglected?

This is one of Bogarde’s most humanistic roles. Stripped of any implied politics, ideology, or perversions that we saw in many of his previous films, Bogarde inhabits the role of a regretful father that reveal an actor capable of metaphysical depths. As if enacting what we might call “an actor’s kenosis,” Bogarde empties himself of the Self, and becomes a man—Tony—who delights in life. However, life’s delights are often punctured by an unbearable burden of being. This was the last time Bogarde emptied his own being for the sake of Art before he died nine years after filming Daddy Nostalgia.

Tavernier’s vision is poetic. The exploration of the relationship between father and daughter, regret and mortality are like the swaying palm trees of the French Riviera, the unsettling wind, and the calmness of the sea that grounds Caroline in the chronological break from the daily existence. Chronological time carries no weight anymore. What matters is one’s being in relation to the past. Caroline’s grasping to keep her personhood alive more so than Tony is fighting his own death. She has identified ontologically with her father and now, on the threshold of her father’s death, she fears that she too will disappear.

We’re all beings who are metaphysically separated from each other, despite the fact that familial relationships are often driven by closeness. Each person must remain his or her own being, but the relationship between a parent and child is inextricably connected. This is the existential dilemma that both Tony and Caroline face. At the end, Tony’s death becomes a bringer of disorientation, which she has been so fervently preparing for, yet mostly quietly avoiding.

She must go back to her parents’ home but the trains from Paris are at a standstill. The workers are on strike, and she’s unable to find another means of transportation. With bags in tow, Caroline wanders around the streets of Paris, lost in sadness and incredulity that death came for her father. All her life, Caroline has sought her father’s love. Now that Tony has died, she wonders whether a small part of her die too. Will she perish existentially or will she become stronger?